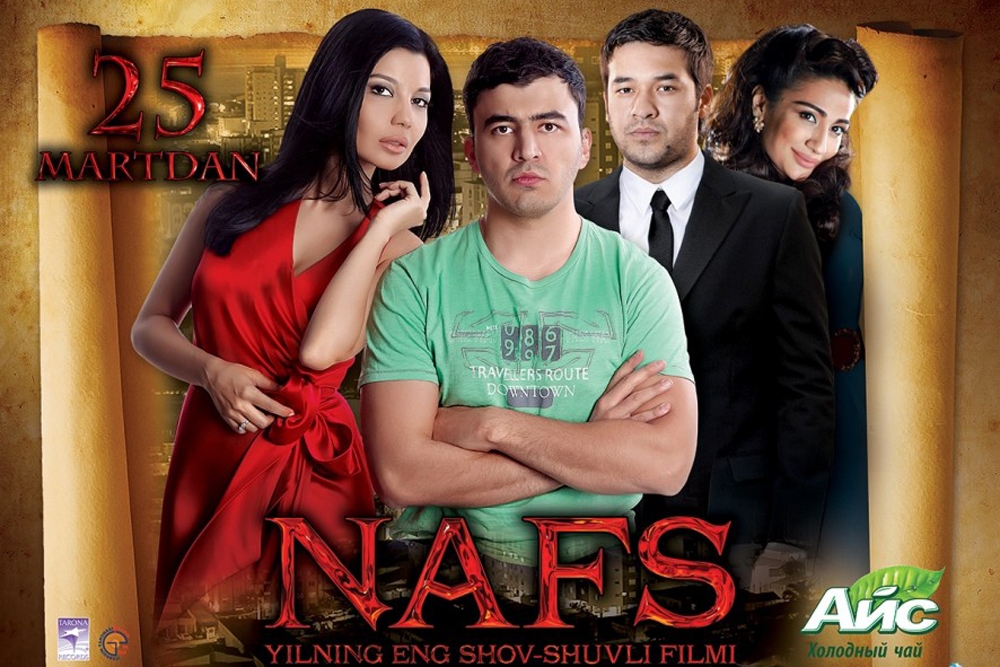 Pulled from Tashkent theaters in October 2011 during its first release, “Nafs” was considered too radical in Uzbekistan; its director was suspected by authorities of promoting not just Uzbek traditional values, but Islamic ones. Three years later the film finally was allowed to be shown, attracting a full house in Tashkent's landmark Navoi Arts Palace. (Official Movie Poster)

Abdurakhmon, an Uzbek shepherd in his early 20s, lives in Uzbekistan's remote mountains, far from any town. After long days tending his sheep, at night he is glued to an old Soviet-era television set he inherited from his father.

Despite the poor signal, for hours he watches music videos, concerts and films about glitzy lifestyles in the West, leaving him disillusioned with his boring routine. Day after day, dreaming of the life he sees on television, he catches himself thinking, "I'd give my soul" for that. Yet, offered a chance to live a lavish Western lifestyle in the capital, Tashkent, Abdurakhmon has a blinding realization: Nothing can compare with the happy life of an Uzbek villager.

This is the plot of the controversial Uzbek film "Nafs" ("Temptation"), which, despite being produced and premiered in 2011, gained wide distribution on Tashkent’s silver screens only this year.

"The most scandalous film of the year," read the posters outside Tashkent cinemas screening "Nafs." On a sultry summer night, the film attracted a full house in Tashkent's landmark Navoi Arts Palace.

But nothing frightens the strongman Karimov more than radical Islam. And, apparently, it was the depiction of Islam in the film that was the cause of the delayed release.

At first glance the film fits with the government’s line on "traditional culture." Yet, the film’s anti-Western tone may have gone too far for official tastes by stating the obvious – that Uzbek culture is connected to Islam. Soon after it was first released in October 2011, the film was pulled from theaters and its director, Farrukh Soipov, was suspected of promoting not just Uzbek traditional values, but Islamic ones. He was reportedly interrogated by the secret police.

"No one knows what the reason for the ban was – whether it was the fact that Farrukh Soipov was then an observant Muslim and had made an umrah [pilgrimage to Mecca], or whether it was the film's title," a member of the production team told Radio Ozodlik on condition of anonymity after "Nafs" was re-released this year.

In Islam, nafs is an important notion, especially in Sufism, whose followers define it as something "which blocks or interrupts" attention from Allah.

The Radio Ozodlik source saw no religious connotations in the movie despite its Faustian plot, where the devil approaches Abdurakhmon in the body of a beautiful woman and offers a contract for his soul. Abdurakhmon signs the pact and embraces a celebrity lifestyle in Tashkent. But the high life soon starts to lose its shine. Abdurakhmon repents, and manages to reclaim his soul by turning to Allah.

Tashkent moviegoers told EurasiaNet.org they did not see particular religious connotations in the film, but said it clearly demonstrated a struggle between Uzbek values and Western materialism – something that should fit snuggly into the official line.

"This film is about a Western lifestyle and how our Uzbek values are better than foreign ones. It's about the need to be content with what you've got and not to desire material things," a young mother in Tashkent who had watched the film with her two young children told EurasiaNet.org.

These days, foreign-based websites (including EurasiaNet.org) that cover current affairs in Uzbekistan are blocked inside the country, while state-owned and semi-independent media dutifully cover acceptable themes. Officials have encouraged Uzbeks to clone Western social networking sites like Facebook and Twitter and Russia's Odnoklassniki.ru.

A film released last year and made with government funding – entitled "Odnoklassniki.ru" after the Russian social-networking platform – plays on fears of the Internet and social media.

The plot revolves around a group of young people who meet online and end up sucked into all kinds of trouble: The girls are trafficked into slavery and the young men become Islamic militants – two fates that state media constantly warn children will await them should they not obey their parents and teachers, and embrace Western ways. The moral of the story is that even modern, tech-savvy young Uzbeks can easily fall victim to foreign dangers lurking in cyberspace.

In this case, there is a happy ending: The militant cell is busted, the trafficked heroines return home and live happily ever after. As for the radicalized young men, the film leaves viewers to guess their fate.