Before the pandemic, small businesses accounted for around 56 percent of Uzbekistan’s GDP. 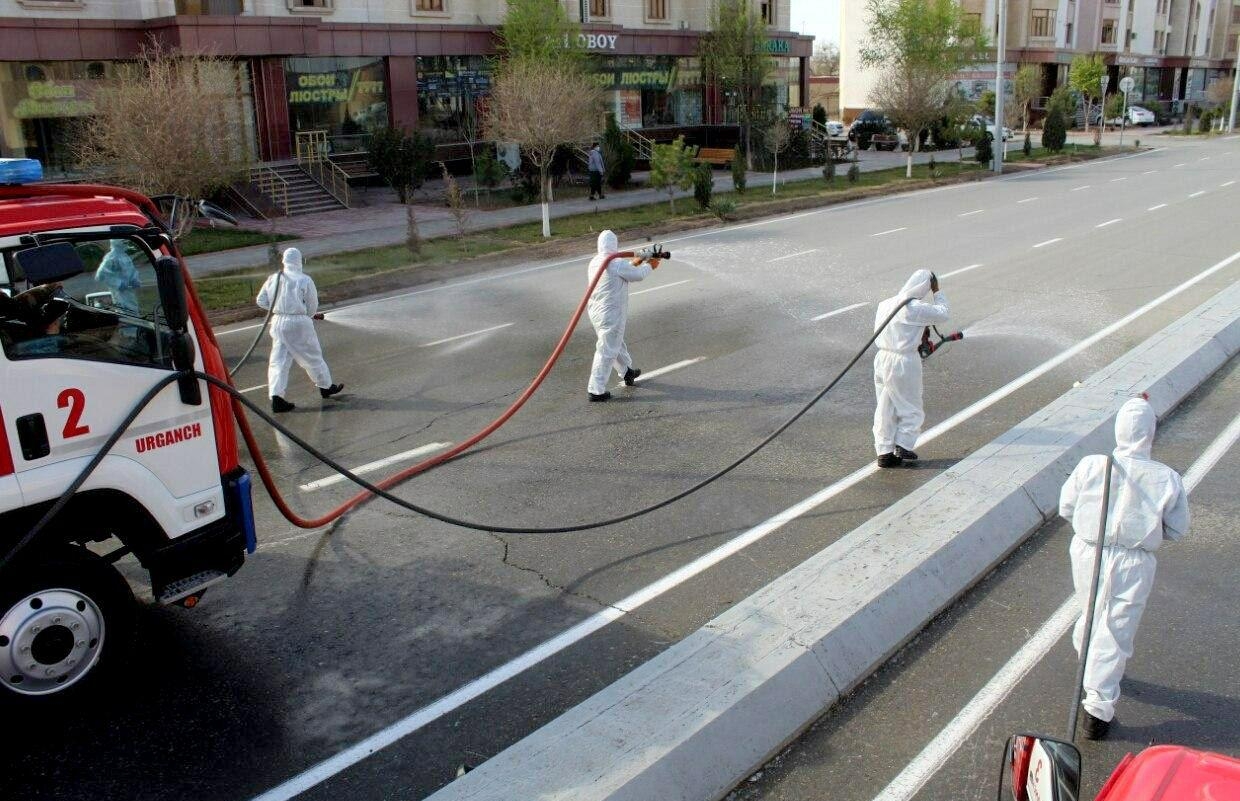 At least Main Street is getting attention. (Khorezm regional government)

He never really got used to it in the first place. Out of habit, he has always awoken daily at 5 a.m. First thing, he heads out to stretch his legs and chat with friends or relatives.

But since the end of March, the streets of his village in south-central Uzbekistan, HodjaIlgor, which is best known for reputedly being the birthplace of Tamerlane, have been deserted at that hour.

If Tagayev, 42, spotted anybody, he was tempted to deliver his routine “Assalam alaikum” and rush to perform the customary Uzbek greeting: right hand out for a shake and left hand on heart. But social distancing rules proscribe such contact.

Coronavirus has soured Tagayev’s mood. The very word, which he has trouble pronouncing, sends him into a rage. The virus has robbed him of his main source of income, fashioning metal wires into chicken coops. He usually sells one cage a day, for about $10, making a $5 profit.

“Because of this virus, I have lost my customers and my daily income,” the villager told Eurasianet. “We have no one in our family who works in government service.”

As soon as lockdown was declared, orders dried up. In addition to the cage-manufacturing side-line, Tagayev has 1,200 square meters of land on which he grows potatoes and other vegetables. In a greenhouse he built with his own hands, he has planted tomatoes and cucumbers. That is only enough to provide extra food for the family, he said.

Tagayev has four children. His wife does not work, even though she has a good education and is a trained teacher. His parents live with him. That makes eight mouths to feed.

Every evening, Tagayev has been watching TV in the hope of hearing of news of a definitive and total end to the lockdown. What he has heard instead is President Shavkat Mirziyoyev promising help to the public and businesses alike. Much of the jargon goes over his head and there is little in what he hears that is of comfort to him, his family or his business, Tagayev told Eurasianet.

Before the pandemic arrived, small businesses accounted for around 56 percent of Uzbekistan’s gross domestic product. There were 13.3 such enterprises per 1,000 people. And the proliferation of such small businesses has been increasingly rapid.

Uzbekistan has turned to international financial institutions for help fighting its way out of this impasse. In April, Mirziyoyev promulgated a decree pledging to raise $3.1 billion in loans from the likes of the World Bank, the Asian Development Bank, the Saudi-led Islamic Development Bank, the European Bank for Reconstruction and Development and the China-backed Asian Infrastructure Investment Bank.

More than half of the government’s 10 trillion sum coronavirus war chest – around 5.5 trillion sums ($540 million) – is being earmarked for supporting businesses and jobs. Entrepreneurs with loans are also being given some breathing room by having loan repayment schedules pushed back and some taxes waived.

How much good will that do?

Come what may, short-term pain is inevitable. The IMF is forecasting a slowdown in economic growth to 1.8 percent this year, down from 5.5 percent in 2019. The fund then sees a sharp comeback in 2021, however, with the economy expanding by 7 percent.

“Making predictions is difficult and recovery is going to depend on many factors,” economist Bakhrom Rajabov told Eurasianet.

Rajabov said that moderate recovery in the second half of 2020 will be subject to how effectively the coronavirus outbreak is curbed and on how quarantine measures are eased.

Official figures appear encouraging. As of May 10, the total number of recorded coronavirus cases had reached 2,411. Of that total, the Uzbek government has claimed that around three-quarters have already recovered and that the number of fatalities only recently entered the double digits. Reporters have few means by which to independently corroborate such positive accounts, however.

The phase that began on May 11, meanwhile, has seen the country divided into a sliding scale of relative epidemiological risk: red, yellow and green. The red zones comprise areas were cases of coronavirus have been recorded in the previous two-week period. At the other end of the spectrum are the green zones, where either nobody has been found to have the coronavirus or all former carriers have now been declared cured. Restrictions in those places have been lightened.

The district of Yakkabag, where Tagayev’s village is located, is among the green zones.

How to create jobs?

Quite how badly this crisis will have damaged the job market remains to be understood.

“As a result of the crisis, the labor market will undergo transformations and unemployment will rise,” Rajabov said. “The government is looking for financial resources to cover the cost of benefit payments, but in the future, it will be necessary to think about how to create new jobs. This will require additional financial resources.”

Farkhod Mirzayev, a political analyst, is more confident of a quick recovery.

“The main losses have been suffered by the state in the form of lost taxes and income from businesses. But quarantine is not eternal,” he said. “All losses can be recovered.”

Mirzayev said Uzbekistan was well-positioned as many areas of industry never really ceased operating at all.

“When the quarantine is lifted, the first sectors to be restarted should be transport and trade, meaning bazaars,” he said.

Rajabov said, though, that maintaining recovery would also envision greater investment into healthcare, which has carried much of the burden of this crisis. He pointed, by way of illustration, to Uzbekistan’s relatively poor position in the Global Health Security Index, a system created by the Johns Hopkins Center for Health Security, the Nuclear Threat Initiative and the Economist Intelligence Unit to evaluate the solidity of the healthcare system. Uzbekistan ranks 116th out of 195 countries.

The opening of a 10,000 bed infectious diseases hospital outside Tashkent in April was among the rapid, post-outbreak responses aimed at addressing that problem.

A correlated issue is the persistent weakness of welfare, a problem that has implications for productivity.

“It is necessary to create a Ministry of Social Protection, and more generally an entire system of social protection. The crisis has exposed weak points,” Rajabov said. “Prior to the authorities adopting a series of coordinated actions, it was volunteers who were delivering groceries to the poor and the disabled. And there have been complaints about inaction in mahalla [neighborhood] committees, although it is this institution that is supposed to be closest to the population.”

Tagayev did not wait around for lockdown measures to ease before looking for a new source of income. He took his three-wheeler mini-truck and began carrying hay to farmers with cattle. Each trip, which can take several hours, earns him $2. It isn’t much, but Tagayev is hopeful the rainy spring has made this a viable job until at least the summer.

“I’ve been watching Russian television and seeing how in the United States, in Germany, even in Kazakhstan the government is helping small businesses with cash handouts and cheap credit. Will we have the same in Uzbekistan?” Tagayev said. “I doubt it. So, it seems like I will just have to dig myself out of this situation.”