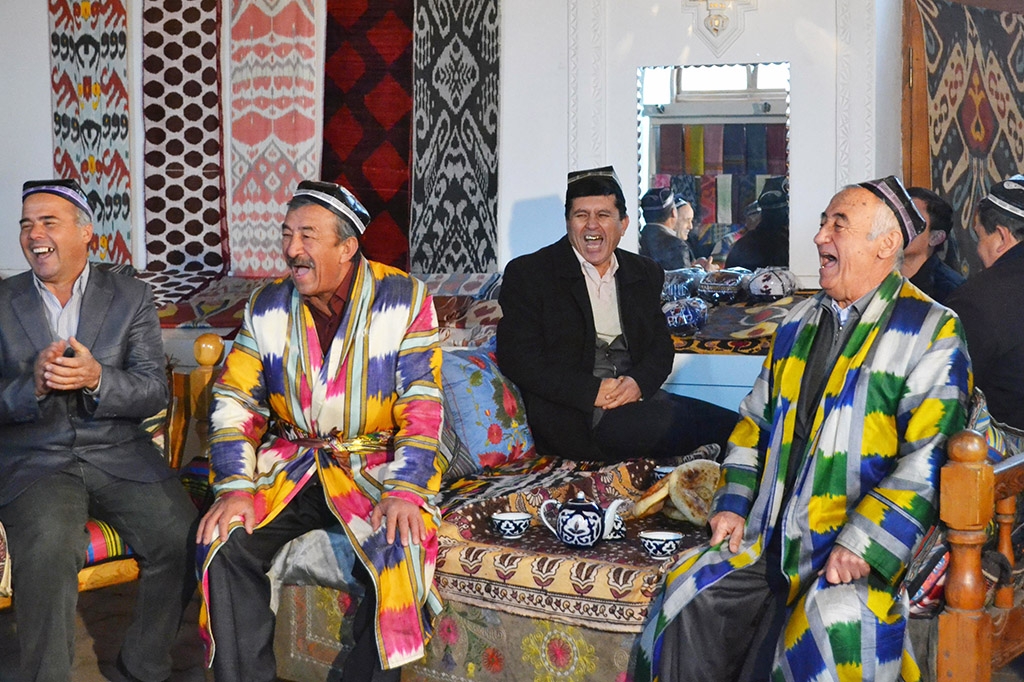 The laughter can be infectious. (photos by UNESCO)

A father sees his son standing in front of a mirror, taking a photograph of himself with his mobile phone. The boy’s eyes are closed.

“Son, what are you doing?” the father asks.

“Father, I am taking a photograph of my dream,” his son replies airily.

Thus begins a dialogue between two performers of askiya, a centuries-old Uzbek tradition of wordsmithery that prizes wit, improvisation, and mastery of language – including local dialect.

The humorous back-and-forth that follows during a rehearsal in front of a small audience at Margilan’s main theater ruminates on the relationships between generations.

But the pair might as well be discussing their favorite tradition’s chances of survival in the smartphone era, as askiya performers – mainly concentrated in the Fergana Valley – reach venerable ages and the younger generation hesitates to take up the baton.

The performers are not afraid to laugh at their own jokes, and the laughter can be infectious.

In summer it can be heard sweeping across teahouses, where impromptu sessions burst forth, and filling Margilan’s central park at packed annual festivals (before the pandemic).

The dialogues come in dozens of different forms, all of which are known to regular performers.

Mockery is par for the course, but should be “subtle, light and kind and never directed towards the humiliation of a fellow performer,” according to Sultonnali Mannopov, a lecturer at Fergana University and the author of a book called “The Art of Askiya and Uzbek Humor.”

The tradition is believed to have originated in the Fergana Valley, the long-settled eastern part of Uzbekistan that is known for its fertile land and population density.

Uzbek historians claim it to be more than half a millennium old and cite references in the works of celebrated 15th-century poet Alisher Navoi.

In 2014 askiya was inscribed on UNESCO’s Representative List of the Intangible Cultural Heritage of Humanity. UNESCO describes askiya as having “a strong educational component, using humor to teach people to be more attentive, and to analyze flaws and shortcomings in daily life, thereby nurturing cultural and social development.”

Unlike aitys, a more musical Kazakh equivalent recognized by UNESCO a year later, women do not take to the stage in askiya, but often participate from the audience.

For Mammasidik Sherayev, one of only nine professional askiya artists in Uzbekistan, mastery of the performance was a lifelong calling.

Born in 1868, Shakarzhonov’s career as an entertainer saw him perform at the court of the Kokand khanate, for Basmachi chiefs resisting the Soviets, and for Uzbek and Tajik workers building the Great Fergana Canal in the 1930s, according to an online tribute written by the well-known television journalist Mukhtar Ganiyev.

When Shakarzhonov died a celebrated “People’s Artist” in 1958, the national communist newspaper Red Uzbekistan credited him for “[exposing] with his bright, original talent and apt, critical words, all the vulgar phenomena that hinder progress and the construction of a new life.”

Sherayev was 13 at the time and already imitating his thick-browed, long-lashed hero’s gestures and jokes at home, much to the mirth of relatives.

“He was a master of sharp words,” Sherayev told Eurasianet of Shakarzhonov. “So much time has passed since then.”

Nowadays Sherayev is part of a government-backed republic-wide project to secure askiya’s legacy. Just before his reelection in October, President Shavkat Mirziyoyev paid a visit to the Fergana Valley and promised to open a department to support askiya and the region’s circus arts at the State Cultural and Art Institute in Tashkent.

Sherayev has overseen a series of youth askiya competitions in the region that have since gone nationwide.

“If we can find one very talented artist out of a thousand people it will already be a huge success,” he said. “Not everyone can go out and engage an audience. You need to have the necessary skills and a proper outlook on life.” 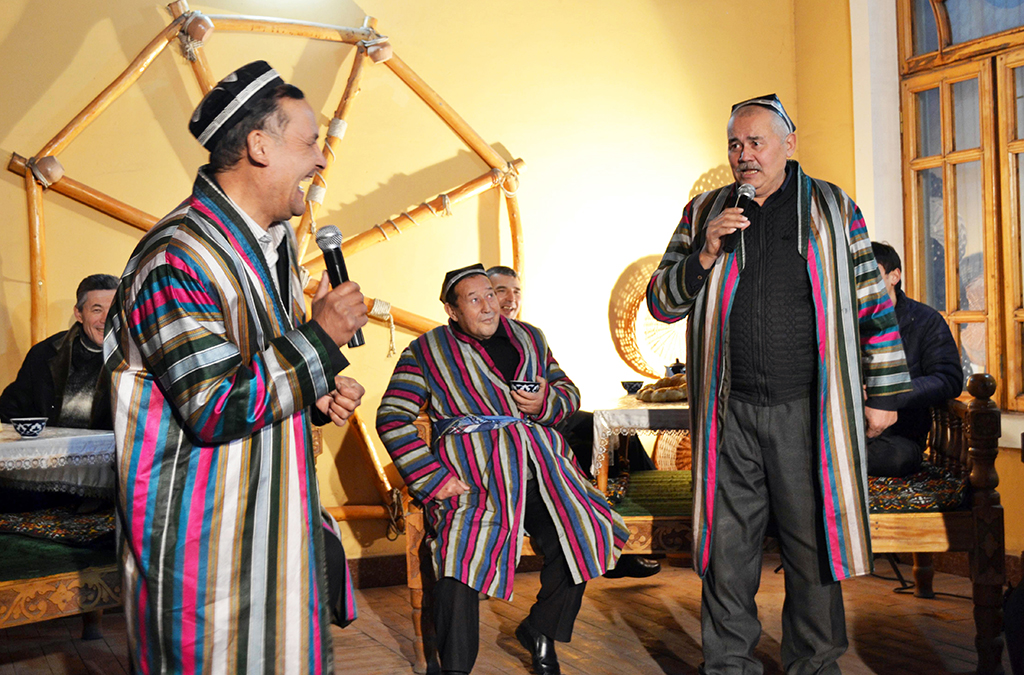 Having survived the Soviet Union, askiya faces stiff competition from new, imported comedy formats, many of which have found their way onto Uzbek television.

“The modern audience has become very lazy in terms of perceiving and absorbing content with deep context and subtext,” said Yuldashev, 42, who moonlights as an emcee at weddings.

“Spectators prefer [humor] to be light. They hear it, they laugh. In askiya, you need to understand the topic, really delve into what is happening,” Yuldashev told Eurasianet.

Tavakal Sultonov, director of the Margilan theatre, shares these concerns.

While performances in the 200-seat venue regularly sell out, it is older residents that make up most of the crowd, he said.

“We need to promote askiya on television, promote it on the Internet. It is the story of life, of kindness, and the story must continue. What will humor become if it has no meaning?” the theater director said.