The growing ranks of young women at the Bukhara madrasa reflect a broader phenomenon. 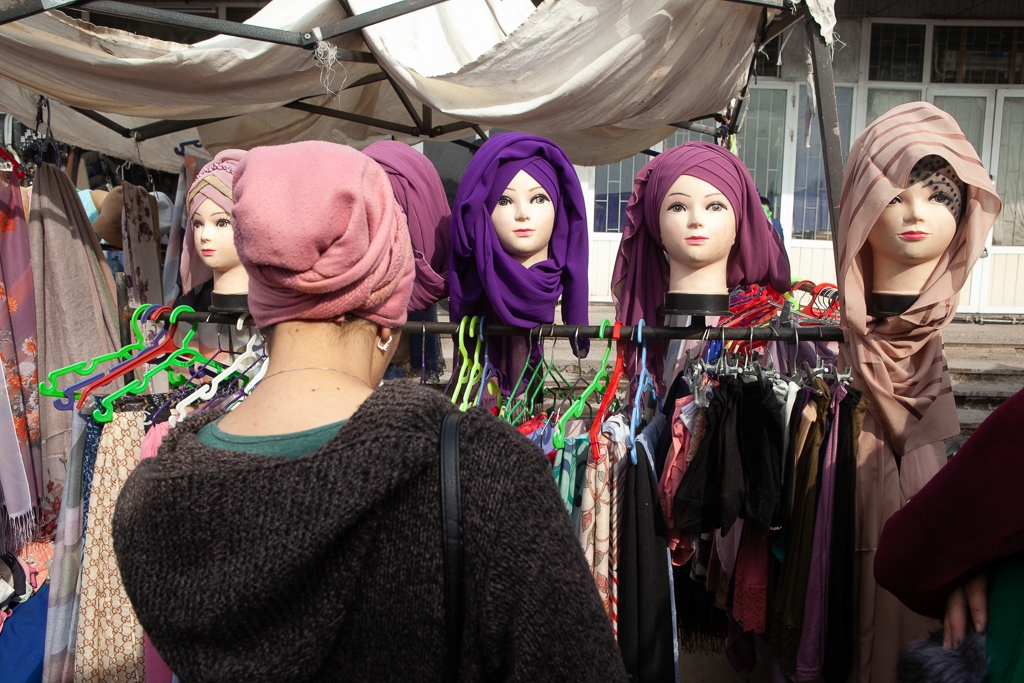 The sound of the female chanting shatters the morning silence at the old madrasa in Bukhara. To a casual passersby, it might sound like choir practice. Listening more closely, you hear that the recitation is in Arabic and that the young women are reading suras from the Koran.

Among a dozen or so Islamic religious education institutions currently operating in Uzbekistan, only two cater specifically to women. This is one of them.

Inside the building there is a small courtyard with four benches and a few trees for shade. Girls in dresses flowing to the ground and white hijabs stroll around the yard carrying their books.

Males are rare sight. When the students see them, they offer the greeting assalam aleikum and avert their eyes.

Rohat Mamatshoyeva, 30, has been at the school for a decade. First she studied there, completing her courses with distinction. Then she stayed behind to teach. As deputy director of the madrasa, she is in charge of non-curricular aspects of life at the school and ensuring that pupils are abiding by the dress code.

"We are teaching 100 women from all over Uzbekistan here. At admissions time, there is one place for every six or seven aspiring pupils. To study here is a matter of prestige. This is, after all, the first madrasa for women in the country,” Mamatshoyeva said.

The madrasa, which girls can enter after completing high school, has trained hundreds of female ministers of the faith and teachers of Arabic since opening in 1992. Tuition fees are around $775 for the year. Students get some of that back as a monthly $10 stipend.

As official tolerance toward Islamic piety has grown in Uzbekistan, interest in religious education has likewise increased. The Bukhara madrasa has taken steps to meet that need. Two years ago, around 20 students were admitted annually – now the figure is closer to 30.

Kamila Achilova, a second-year student and Bukhara native, is passionate about her choice to study at the madrasa.

“I really like reading the Koran and the English language. My dream is to read the Koran in English. I know it’s difficult, but I can do it,” she told Eurasianet.

Achilova plans to go to university and get a degree in tourism studies once she leaves the madrasa. She said that twin knowledge of English and Arabic would be valuable in making her way into the tourism business.

“The only thing I am worried about is that my parents will marry me off. Matchmakers come to our house all the time. I am already 23 years old,” she said.

Aziza Akhmatkulova came to Bukhara from the Syrdarya region. Her father is an imam at his local mosque. His ambition was to see Akhmatkulova take up medical studies, to become a dentist. Instead, she has opted for a religious education.

“The Koran is everything to me! I especially love the Arabic writing. I am drawn to the magical lines of the Arabic alphabet. Calligraphy is an art, and I want to master it at a professional level,” she told Eurasianet.

Akhmatkulova plans to finish in Bukhara and then enroll in the Imam al-Bukhari Tashkent Islamic Institute. Then she will return to Syrdarya to spread Islamic education among women and girls.

The existing madrasas clearly are nowhere close to satisfying the clamor for faith-based education.

“Existing educational institutions cannot meet the growing demand for religious education among the female population. I think it would be advisable to organize one madrasa in each of the regional centers of the country,” Mamatshoyeva, the deputy director, said.

Inobat Kurbanova, a teacher at the Bukhara madrasa, says that after graduation students may aspire to become an otin, a female religious teacher, or a religious advisor at the mahalla (neighborhood) committees that administer much of public life at the local level in Uzbekistan.

Otin is again becoming a sought-after profession. This role has traditionally been performed by older women in the community. As a rule, they might have been people familiar with the Koran and with a good knowledge of the hadith, the sayings of the Prophet Muhammad. Women’s path to the faith has often been found through the ministrations of otin. This traditional institution declined considerably, however, throughout the Soviet era and then the markedly anti-pious rule of the late President Islam Karimov, who died in 2016.

Nafisa Sadikova, 59, a native of Uzbekistan’s Ferghana Valley, said she decided to become an otin after retirement. Before that, she taught in a secondary school. She was helped in learning the Koran by her husband, who is a local mullah.

“I conduct all women's religious events and ceremonies in my village. I give advice on how to solve family problems. There is lot of work, especially on religious days. Whoever is able to do so pays for my services,” Sadikova told Eurasianet.

Marufa Tohtahadjayeva, a historian who has studied the evolution of women’s role in modern Central Asian society, said she believes that enduring economic problems will continue to stimulate interest in Islam among women.

Religion is a consolation and a route to self-assertion, she said. In this respect, the growing ranks of young women at the Bukhara madrasa reflect a broader phenomenon.

“There is tendency toward greater traditionalism and an increase in the levels of religiosity among the population. This process has been set into motion, and there is no stopping it,” Tohtahadjayeva said.