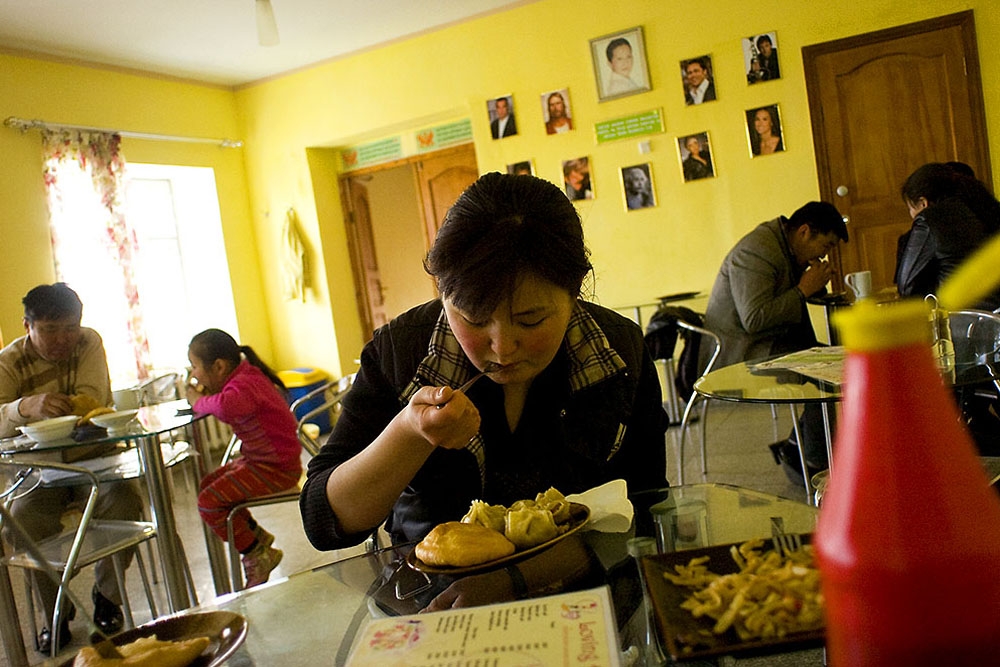 An unlikely vegetarian movement is taking root in Mongolia, where livestock outnumber people 14 to 1, and annual meat consumption tops 200 pounds per person.

The first vegetarian restaurant in Mongolia, Ananda’s Cafe, opened in 2006. Today more than 20 vegetarian and vegan restaurants dot the capital, Ulaanbaatar, and a handful of others are scattered throughout the country. Ananda’s has launched a catering service, and another popular restaurant, Luna Blanca, now sells frozen faux-mutton dumplings in local supermarkets.

The vegetarian restaurateurs are mostly Mongolians. Many follow Christian and Buddhist-influenced spiritual movements that promote vegetarianism, some of them fringe foreign sects, such as the Indian-based meditation group Ananda Marga, and followers of the quasi-Buddhist Supreme Master Ching Hai, who promotes vegetarianism and veganism.

Mongolians are turning to vegetarianism “mostly because of health. Also because of meditation – they’re following this trend,” says Solongo, a former doctor for the United Nations, who like most Mongolians uses only one name. She estimates that vegetarians number around 30,000 or 40,000 throughout the country, just over 1 percent of the population. In the United States, about 3 percent of adults are vegetarian, according to vegitariantimes.com.

Increased trade with Russia and China, as well as expanding Internet access, are providing more information about alternative diets and nutrition, adds Solongo.
Vegetarianism is taking off in popularity as a reaction to the “extreme meat consumption,” of most Mongolians, says Altanzaya, a sociologist and a co-owner of Luna Blanca who considers herself Buddhist. “Our goal is to make [meat-free foods] available.”

Unlike beliefs elsewhere in Asia, Mongolia’s unique brand of Buddhism does not emphasize sparing the lives of animals for food, probably out of pragmatism. The country’s dry, mountainous landscape and nomadic culture mean that people have historically ignored agriculture and depended instead on gaining sustenance from meat and dairy products.

This high-protein diet fueled Genghis Khan’s hordes as they swept across the known world some 800 years ago. Historians have noted that Mongolian soldiers could ride for days at a time, reputedly drinking blood from their horses’ necks for nourishment on the go.

Some Mongolians consider meat the only real food. “If there’s no meat, [my father] doesn’t consider it a meal. You give him leaves, and he says, ‘What am I, a goat?’” says Dolgor, a young mining company employee.

The staples in Mongolia tend to be bland, focusing on flour, rice, and meat, particularly mutton. Dishes that most Mongolians refer to as “national foods,” buuz and huushuur – mutton-filled dumplings steamed or fried, respectively – and tsoivan, steamed noodles mixed with meat and root vegetables, are widely thought to originate in China.

Even more than meat, the traditional Mongolian diet depends on dairy products. Milk is viewed as sacred; each morning, women in the countryside and in urban apartment blocks make offerings to the sky, throwing ladles of the day’s first milk tea in the four cardinal directions.

According to Altanzaya, one of the challenges to starting a vegetarian restaurant in Mongolia is getting people to realize that the menu isn’t simply dairy products. The Mongolian terms are only subtly different; the phrases for dairy products (tsagaan idée) and vegetarian food (tsagaan khool) both translate as “white food.”

Most of the new vegetarian restaurants use soy-based meat substitutes to mimic traditional Mongolian dishes. Vegetarian buuz and tsoivan are among the most popular items. Vegetable-based meals are less common, except at Ananda’s Cafe, which anchors its menu on a different vegetable medley every day – cauliflower, eggplant, zucchini, and others – to lure vegetarians hungry for a broader spectrum of nutrients.

The menu’s originality, or lack thereof, is often beside the point. “The more we care about the environment and others and animals, the better we feel,” says Altanzaya.

Mongolian vegetarians often face skepticism. “A lot of people think we’re crazy,” says Erdenchimeg, a chef at the Loving Hut, a chain owned by the Supreme Master Ching Hai International Association, which promotes meditation and prayer. She became a vegetarian in 2008 and in recent months switched to veganism – all part of a commitment to lessening her impact on the environment, she says.

Javkhlan, a university teacher in western Hovd Province, also took up vegetarianism 18 months ago after he began practicing the Supreme Master’s meditation technique. He cooks tofu, dehydrated soy “meat,” and what few vegetables are available in the province center. The imitation meat tastes bland without flavoring, but he doesn’t miss meat, he says. “I’m happy being vegetarian. My health has improved.”

Still, some of the vegetarian restaurants’ employees haven’t fully committed. Amarmurun, a waiter at the Stupa Cafe, part of the Foundation for the Preservation of the Mahayana Tradition, an international Tibetan Buddhist organization, sheepishly admits, “I like meat. I just work here."