Questioning the territorial integrity of the neighboring country, once a taboo topic, is increasingly entering official discourse both in Baku and Tehran. 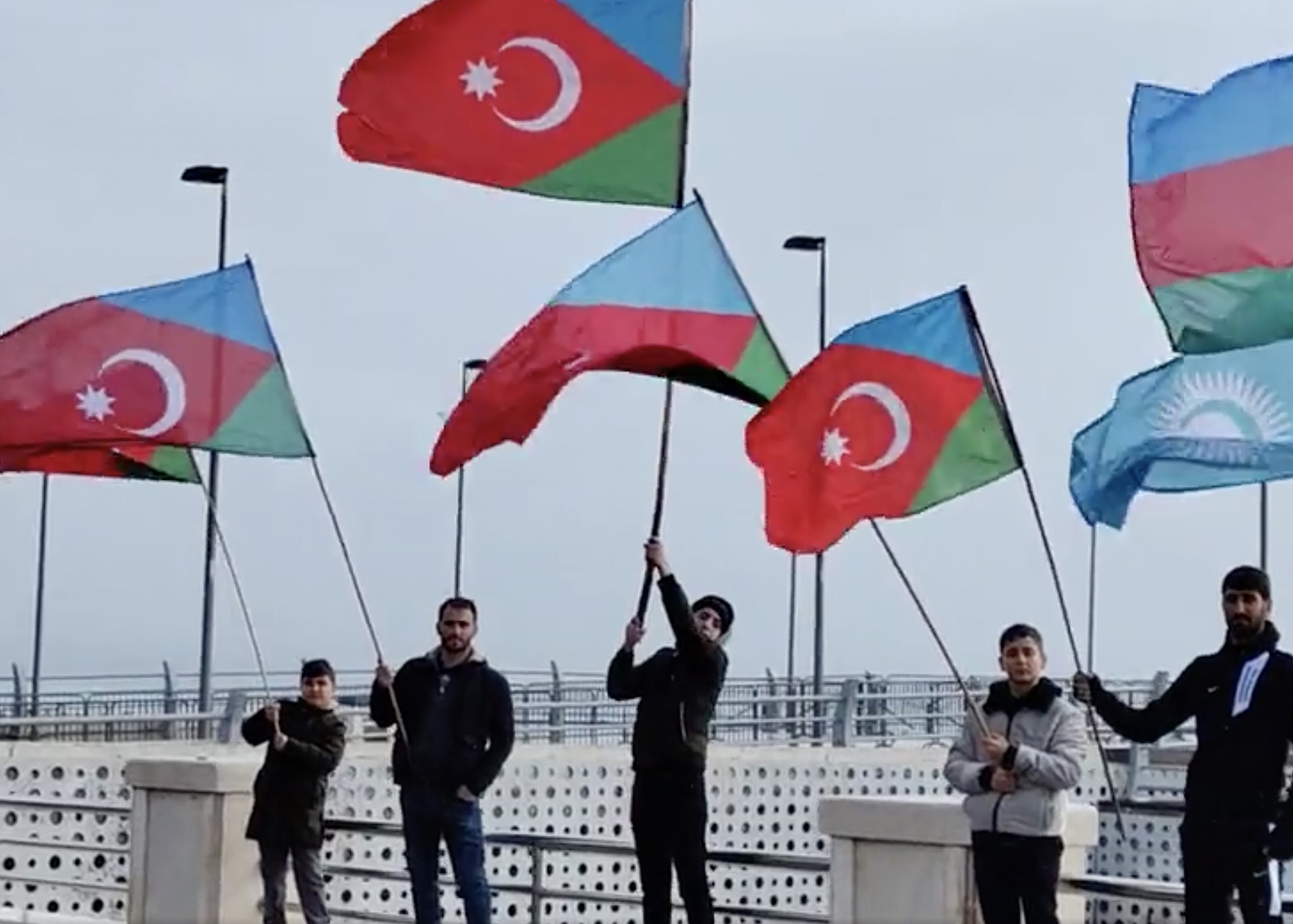 Mahmudali Chehreganli, the self-proclaimed leader of the South Azerbaijan National Awakening Movement, has not been allowed into Azerbaijan since 2006. From exile in Washington, he advocates for the northern, ethnic Azerbaijani-majority part of Iran to secede.

It is a position that is so sensitive to Tehran that, under an informal agreement between Azerbaijan and Iran, Baku has for years blocked him from entering the country.

But as tensions have spiked between Azerbaijan and Iran, for the first time in many years, Chehreganli has made multiple appearances on Azerbaijani television, including interviews in the past week on state-run AZ TV and the public network İctimai. He has called for the overthrow of Iran’s government, as nationwide protests continue to grip the country, using the epithet that Azerbaijani media has recently adopted to describe Iran’s theocratic leadership: the “mullah regime.”

“Greater Azerbaijan will be the death of the chauvinist and hateful mullah regime,” Chehreganli wrote in an Instagram post promoting the appearance on AZ TV, adding the Azerbaijan flag emoji.

It was just the most vivid in an escalating series of tit-for-tat rhetorical attacks between Tehran and Baku that are increasingly verging into previously taboo territory: the territorial integrity of the respective countries.

On November 5, Azerbaijan’s ambassador in Tehran issued a suggestive tweet about Tabriz, the main city in northern Iran that holds great symbolic value for Azerbaijani nationalists.

It came just days after social media posts showing posters, their origins not explained, of Azerbaijan President Ilham Aliyev that had appeared around Tabriz and other ethnic Azerbaijani cities with slogans referring to him as “our president.”

AZ TV has been the main conduit for Baku’s irredentist messages, airing several reports in recent days referring to “my Tabriz” and repeatedly questioning the legitimacy of the Azerbaijan-Iran border, which has been in place since the early 19th century.

President Ilham Aliyev also made a reference to the Azerbaijanis of Iran, albeit a more cautious one, in an October 21 speech. “There are many more Azerbaijanis living outside Azerbaijan than in the country alone. Of course, their security, their rights and well-being are of the utmost importance to us. We will continue to do everything to help the Azerbaijanis who have found themselves cut off from our state,” he said.

All of it is a noticeable escalation for Baku’s rhetoric. A year earlier, amid another crisis in Iran-Azerbaijan relations, state media got explicit instructions to not bring up irredentist claims on Iran or mention “South Azerbaijan” even as they were told to launch information attacks on other fronts.

Iran, meanwhile, has been issuing its own threats, also mostly via state media. Sahar TV, an Azerbaijani-language network, also has aired a number of broadcasts implicitly threatening Azerbaijan. In a November 4 interview with ethnic Azerbaijani members of Iran’s parliament, the deputies also called into question the long-standing borders between the two countries.

And when another murky social media post appeared, claiming that residents of Azerbaijan’s Nakhchivan region had appealed to join Iran, Sahar TV provided a sort of justification.

“Let's not forget that after claims by the head of Azerbaijan’s family regime regarding the rights of Azerbaijanis living outside the borders of the Republic of Azerbaijan, we are witnessing excessive calls by the government media against the territorial integrity of Iran,” the channel wrote in a blog post.

Sahar also has provided a rejoinder to the “mullah regime” epithet, now regularly referring to Azerbaijan as the “statue regime,” an apparent reference to the many monuments to former president Heydar Aliyev that dot the country.

The escalated rhetoric represents a fraught relitigation of the two countries’ deeply intertwined histories. For centuries, the territory that is now Azerbaijan was part of the Persian world, with local khanates that were subservient to Persia. As Russia expanded southward into this region, it clashed with Persia and in the 19th century the two empires signed the treaties of Gulistan and Turkmenchay, which established the borders that are still in place between Iran and Azerbaijan. On the southern side of that border, meanwhile, a large population of Turkic-speaking Azerbaijanis remained; today Azerbaijanis represent the largest minority in Iran and while there are no precise numbers, they outnumber the population of Azerbaijan itself.

While Azerbaijan’s first post-Soviet president, nationalist Abulfaz Elchibey, encouraged claims on “South Azerbaijan,” that kind of discourse was tamped down under his successor, Heydar Aliyev. It had for the most part remained that way under Aliyev’s son and successor Ilham.

The mutual threats come as Iran, in recent months, has shifted from its traditional balancing act in the Caucasus by taking a decisively pro-Armenia tilt. Tehran has repeatedly warned against attempts by Azerbaijan to encroach on Armenia’s territory, and said that any interference at the Iran-Armenia border would be a red line. In October Iran’s armed forces conducted large-scale military exercises in which they practiced crossing the Aras River that forms the border with Azerbaijan. Azerbaijan then reciprocated with its own exercises near the Iranian border.

Iran also recently opened a consulate in Kapan, in the southern Armenian region of Syunik that has become the focus of tension between the two sides. At the inauguration of that consulate in late October, Armenian Foreign Minister Ararat Mirzoyan said that Armenia intended to open a consulate in Tabriz.

The rhetoric from Baku is “mostly a response” to what it sees as Iran’s attempts to undermine Azerbaijan’s sovereignty, said Farid Shafiyev, the head of the state-run think tank Center of Analysis of International Relations. That includes attempts to sow divisions among religious Shias and ethnic Talysh (a minority group in Azerbaijan that speaks a language related to Persian and which lives close to the border of Iran), as well as Tehran’s recent shift to open support of Armenia. “So this is the logic – if Iran encourages internal division within Azerbaijan, then it must be ready to confront its own division,” Shafiyev told Eurasianet.

Amid this tension, the two sides also have accused the other country of planning or carrying out attacks on their territory. Azerbaijan’s security services arrested 19 men it claimed were recruited by Iran to carry out unspecified acts that would be “in violation of state security interests.”

And following an October 26 attack on a Shiite shrine in the Iranian city of Shiraz, Iran’s Intelligence Ministry claimed that the violence, which killed 15 people, was organized by an Azerbaijani citizen who had flown to Iran through Baku’s Heydar Aliyev Airport, and that it was coordinated from Azerbaijan in cooperation with elements of ISIS in Afghanistan.

The veracity of either claim is difficult to judge, given the two countries’ lack of transparency and the heightened political conflict between them.

“Whether the intelligence ministry’s statement is fully correct or not, what is really significant is that it felt it expedient to highlight the Azerbaijani footprint,”  Eldar Mamedov, a foreign policy adviser in the European Parliament, told Eurasianet. “And it is impossible not to see it in the context of the growing tensions between Baku and Tehran.” (Mamedov emphasized that he was speaking in his private capacity.)

The escalation of the rhetoric from Baku, including Chehreganli’s appearances and other state TV rhetoric, “has all convinced Tehran that the irredentist drive is encouraged by the highest echelons of power in Baku,” Mamedov said. “By highlighting Azerbaijan’s alleged involvement in anti-Iranian terrorism, Tehran aims to increase pressure on Baku by raising the costs of anti-Iranian policies. To escalate in order to deescalate is a standard tactic of Tehran.”