The local hospital provided first aid, but before long, groups of aggressive men turned up, looking for Dungans. Thousands fled over the nearby border to Kyrgyzstan. 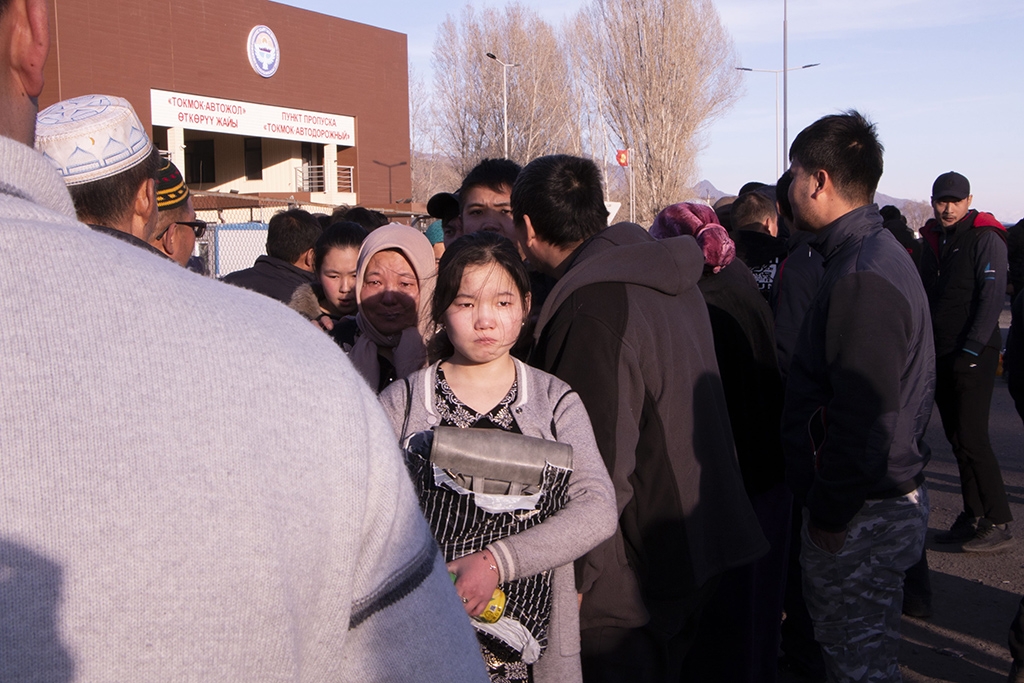 When the rioting, pillaging and killing began in the heavily ethnic Dungan-populated villages of Kazakhstan’s Kordai district on the night of February 7, thoughts quickly turned to escape.

The border with Kyrgyzstan is just a few kilometers from where the violence flared, in the village of Masanchi. Thousands fled. Dozens arrived at Tokmok hospital, just across the border, in need of urgent medical treatment for their injuries.

Within 48 hours, groups of Dungan women, children and elderly people were already hurrying back across the Tokmok border crossing to attend funerals for fellow villagers and to survey the damage wrought upon their homes and businesses by mobs of Kazakh men. At least 10 fatalities have been confirmed.

“Our village is entirely Dungan. We are lucky that we live a little further away,” Abdukarim said. “From day to day, I got on well with the Kazakhs. I have many Kazakh friends from the North Kazakhstan Region, where I study. They have sent me messages of support.”

With those words, he threw a backpack over his shoulder and ran to catch up with his sister, to try and cross into Kazakhstan as early as possible.

Zeynep Mahayu, 50, left her home in Aukatty, another border-straddling village along the same road as Sortobe, after a gang began pelting it with rocks. She was met in Kyrgyzstan by her daughter, who moved to marry a Dungan man from there.

“My sons still live with me. They stayed behind to defend the house, so I am taking them food and supplies,” Mahayu said, pointing with her eyes to her four carrier bags.

As Mahayu recalled, their assailants, whom she described as a group of young Kazakh men, arrived at their home, which lies along the main thoroughfare, in several cars. Everybody was at home when the men began shouting, whistling and throwing rocks.

“We had no idea anything like this could ever happen. I will remember this night all of my life – it was so long and terrifying,” she said.

By February 9, she had received a message from home to say things had returned more or less to normal.

Victims of this frenzy of violence have been highly circumspect about retelling the events and have tried to downplay the ethnic angle. Talking openly about such social undercurrents is discouraged by Kazakhstan’s authorities. When pressed, Dungans that had crossed into Kyrgyzstan would tell Eurasianet that the attackers were Kazakhs, while insisting that “they were not locals.”

Dungan communities in Kyrgyzstan have sprung into action raising funds to assist the victims. Arriving refugees have been given food, some of which has also been handed out to police officers helping maintain order at the border crossing. 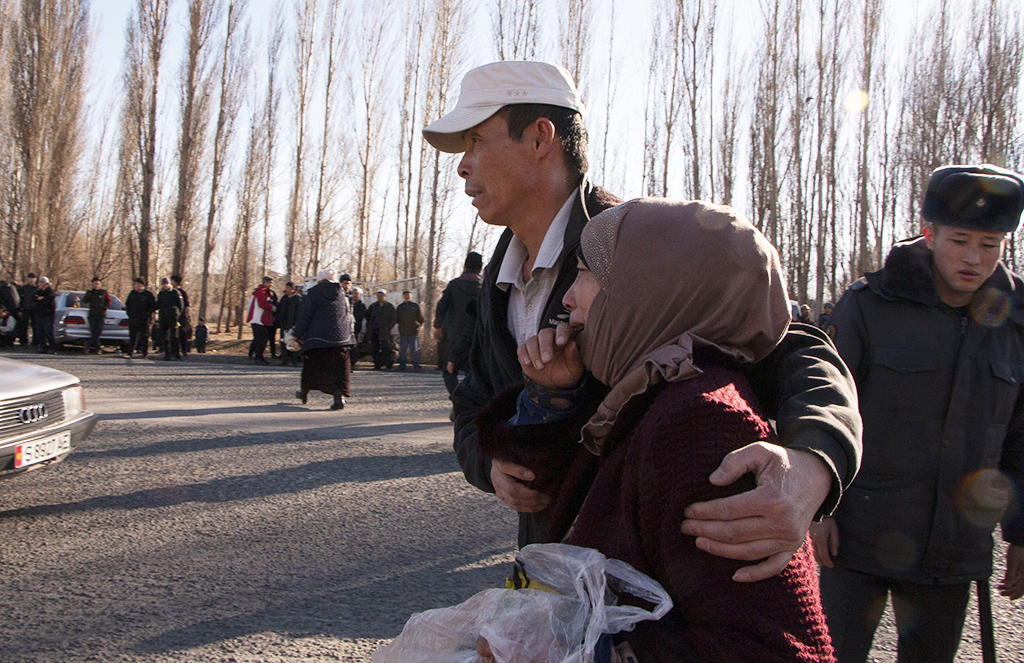 “I have nobody [relatives] on that side. Well, not nobody, there is an entire people of course. They are our brothers,” said 50-year-old volunteer Wan Jebo Usanov. “We are here running around, rustling up plov and feeding the hungry. Government workers manning the border crossing, they had to come from Bishkek, we are feeding them plov and bread too.”

When Eurasianet visited the Tokmok central hospital on February 9, there were a dozen or so ambulances lined up outside. They had arrived from Kazakhstan to take away patients so that they could continue receiving treatment in their home country.

All those being treated in Tokmok were ethnic Dungan. The deputy head of the hospital, Ulan Dyikanaliyev, said 34 patients in all had been admitted. Around half of them had sustained some kind of gunshot wound.

“All 34 are in medium-to-serious condition,” Dyikanaliyev said. “Today, we took in two people who had been attacked with rocks, and a woman with a small child who had burns from when their house was on fire."

A few patients, mostly young men, paced the hospital courtyard. A boy called Islam had still not had the buckshot removed from his finger, which was wrapped in a blood-caked bandage.

One man, Tahir Fulin, was hit right between the eyes from a hunting rifle, his father, Alidzhir, told Eurasianet. Tahir had joined other Dungans in defending Sortobe from a crowd of Kazakhs coming from the direction of Aukatty.

“My son was home when they summoned him, so he went. Our guys were armed just with sticks, but the arriving crowd had rifles,” Alidzhir Fulin said, adding that he did not think the attackers were local.

“In our village there are Kazakhs. I have friends with whom I went to school and we hang out together. They are normal people,” he said. “The attackers came from outside, that’s what people are saying. They came in minibuses. There just aren’t the numbers to pull off something like this around here.”

Fulin learned in a 3 a.m. phone call on February 8 that his son had been wounded.

“It is just as well it was birdshot, not buckshot. They fired from 50 meters away. He got first aid in the local hospital to stop the bleeding, and then they brought him here,” he said.

Another older man from Masanchi, who spoke to Eurasianet on condition of anonymity, had an even more dramatic account.

When the unrest began, he was at home with his family. He was in a state of disbelief that anything was happening. He only acted when a mob began smashing his neighbor’s car and windows.

“My wife said: ‘Let’s get the car running and get out of here.’ They got into one car and I got into the other, and we left. They saw that we were leaving and gave chase in three cars,” he said.

His assailants eventually caught up with him.

“When I got out of my car, they began to scream: ‘Where are the others?’ I said: ‘Guys, I really don’t know. I’m an old man.’ But that did not stop them. They got out some sticks and began hitting and kicking me. They went through my pockets – I cannot even remember how much money I took from the house – and took my telephone, they took everything,” he said.

The gang even stole the car, the man said.

When he recovered from the assault, the man made his way to the village of Aukatty. On the road, he stopped a passing car and appealed for help. But the men who emerged from the vehicle beat him up once more.

“When I regained consciousness, some guys turned up and said: ‘We are local Kazakhs, let’s take you to hospital.’ I did not trust them. I thought they were just going to beat me up again. I said to them: ‘I’m covered in dirt. I’ll only mess up your car.’ They said: ‘Don’t worry about that.” And then they really did take me to hospital,” he said.

The local hospital provided first aid, but before long, groups of aggressive men turned up, looking for Dungans. That was the man’s cue to move.

“[In Aukatty], one guy was looking for his son who had been taken to [the town of] Kordai in an ambulance in a grave condition. He took me home. It had not been burned down, but the gates were smashed open and the windows broken,” he said.

After that, a relative helped him make his way across the border to get medical treatment in Tokmok. He has no idea what he will do now.

“Everybody is terrified. The first thing to do is to return home as soon as possible, if everything returns to normality,” he said.