Videos are emerging that do not support the Tajik government’s minimal statements about its border war with Kyrgyzstan. 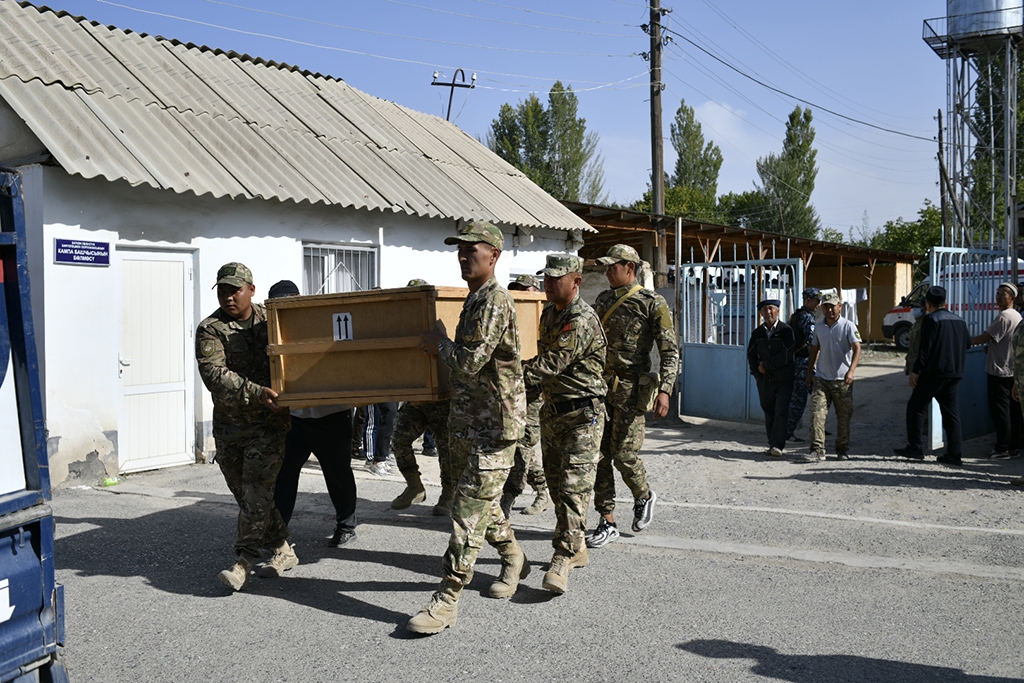 Soldiers removing human remains from the morgue in Batken, the capital of the Kyrgyz province of the same name. (Photo: Danil Usmanov)

With trademark selectiveness, the government of Tajikistan has disseminated its version of events about the battles raging on its border with Kyrgyzstan, which have killed dozens.

The flurry of statements from the State Committee for National Security, or GKNB, has largely been aimed at accusing Kyrgyz forces of violating ceasefire agreements and targeting civilians.

Years of repressive measures aimed at crushing the country’s free press have greatly restricted its ability to report freely and candidly on what is happening.

Some scant insight into what is happening on the ground, however, has been provided by a slew of video clips shared on social media.

Content in that footage – much of it seemingly filmed by Tajiks themselves – appears to lend weight to Kyrgyz claims that Tajik armed groups, many of them comprised of irregular combatants, have indeed been engaged in capturing territory instead of simply trying to defend their own land.

In the afternoon of September 16, the Kyrgyz State Committee for National Security, which is also known as the GKNB, asserted that Tajik soldiers had occupied a school building in the village of Dostuk, which lies inside Kyrgyzstan proper.

Footage shared online – which Eurasianet cannot independently verify – shows that very thing happening. A Tajik soldier can be seen on top of the school building jubilantly pumping his fists in the air. The Tajik tricolor has been hoisted on the flagpole on the roof. Somebody standing near the person filming the scene is heard to say: “There’s a Tajik flag on a Kyrgyz school. Go Tajikistan!”

Another video may serve to substantiate another grave allegation made by Kyrgyzstan.

On September 15, the head of the Kyrgyz GKNB, Kamchybek Tashiyev, told reporters that bearded men in black outfits were involved in the assault on Kyrgyz border outposts the day before. The suggestion appeared to be that Tajik offensives were being led by individuals unaffiliated with the armed forces.

“It is the first time something like this has happened, and that is worrying,” Tashiyev said.

A 10-second video that circulated on social media around September 16 shows groups of Tajik men closely fitting Tashiyev description. Several individuals, some in black T-shirts, others in camouflage gear, are seen checking their automatic rifles. The person filming is heard to say: “Here are our guys.” It is not possible to establish from the images whether the men are indeed irregulars or army personnel, or when exactly the footage was filmed, however.

Another clip disseminated through Telegram shows a group of men in camouflage, but without identifying insignia, sitting inside a helicopter and priming their automatic rifles. The mood is light and the exchange of words among the men is suggestive of the possibility that the scene was filmed before the group was dispatched to engage in combat. As with other such footage that has surfaced in the past few days, there was no way to definitively establish when it was filmed.

Yet another clip shows armed men in civilian clothing and speaking Tajik walking around the desolate streets of a village. To the left of the person filming, a burning house can be seen. A few seconds into the footage, the person holding the phone offers a running commentary.

“Friends, this is the territory of Ak-Sai,” he says, referring to a Kyrgyz village by that name. “Bullets were needed, so I brought them over. […] We’ll hoist our flag here.”

The same man states in his commentary that he was present at the location where the first gunfight which triggered this crisis, on September 14, took place.

“Everything is fine there now. I brought them shells [for mortars],” he says.

Other assorted videos appear to show people, again speaking Tajik, inside homes vandalizing private property and Tajik soldiers firing mortars and laughing as they do so.

The paradox of the situation is that relatively little visual documentation of the events has come out of Kyrgyzstan, where the press and the social media scene are considerably more vibrant and freer than in Tajikistan. This may be in part a result of exhortations from the Kyrgyz GKNB to the public to refrain from sharing video footage and photos out of security concerns.

What visual evidence has emerged from Kyrgyz social media is damning too, however.

Footage shared by Torokul Doorov, a journalist with U.S.-funded broadcaster RFE/RL, shows a scene of devastation in his Kyrgyz hometown of Internatsional, which lies right along the disputed border. A small, covered bazaar is seen with its roof intact but the interior completely incinerated. Some nearby buildings also appeared to have been destroyed by fire.

More visual documentation from Internatsional and elsewhere was posted online by Bishkek-based media outlet Turmush, which cited residents of one village, Borborduk, as saying Tajik troops looted and robbed shops.

Not all the video material shows evidence of Tajik incursions.

One piece of footage shared via Telegram showed at least five people in civilian clothing killed in the Tajik town of Ovchi Kalacha, around 20 kilometers south of Khujand, the capital of the northern Sughd region. (The town was identified to Eurasianet by a local blogger; Eurasianet is not sharing the video out of respect for the dead, who could be identified by the imagery.) Ovchi Kalacha stands just across a thin canal from Internatsional. It is uncertain how the deaths were caused, although the nature of some of the wounds suggest gunfire. Local media have cited residents as saying the town was targeted by Kyrgyz drones, but no visual evidence has yet been produced to substantiate that claim.