Villagers in shadow of Kyrgyzstan dam incensed by Uzbekistan deal

The land transfer has fueled anger and rumors about Kyrgyzstan’s new populist leadership. 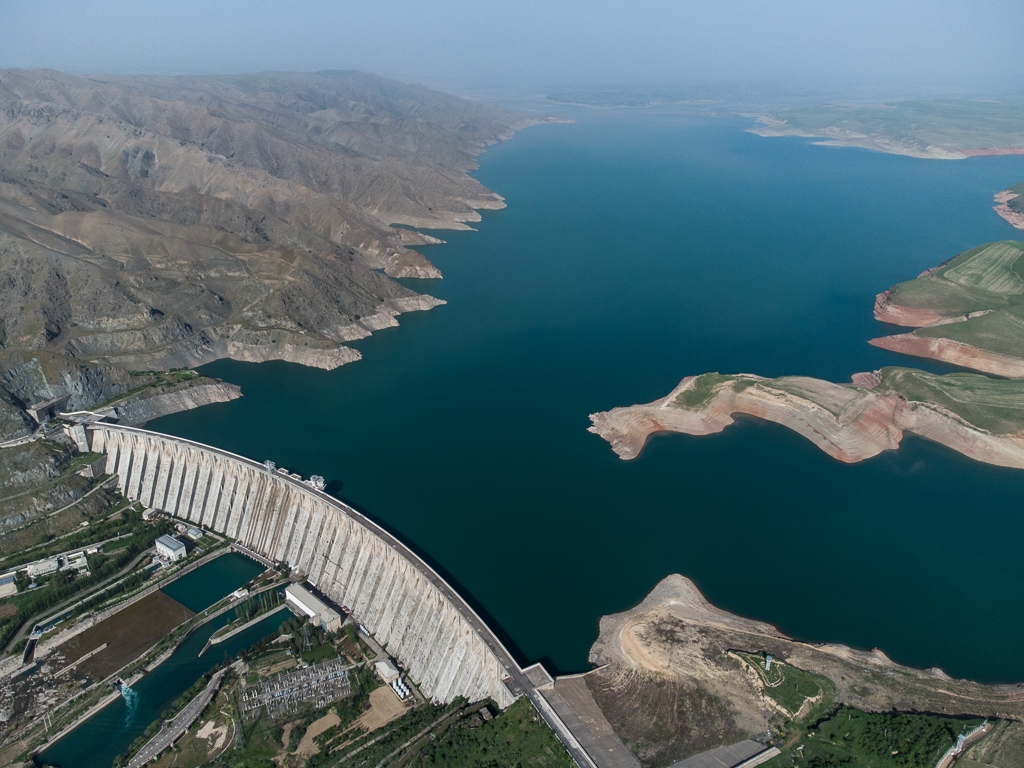 The Kempir-Abad dam was built by Soviet engineers in the 1980s. (photos by Danil Usmanov)

Zholdosh Omorov says the news that a huge reservoir near his house could be entirely handed over to Uzbekistan came like a bolt out of the blue.

Nobody had consulted him or his neighbors in Savay, a village an hour’s drive north of Kyrgyzstan’s second-largest city, Osh, about the idea, the 68-year-old told Eurasianet journalists.

In late March, Kamchybek Tashiyev, the head of the security services, had trumpeted a deal with Uzbekistan that included an arrangement to swap Kempir-Abad reservoir for 80 square kilometers of land – an area about half the size of Brooklyn – as an historic breakthrough that would end decades of rancor over the exact contours of the border.

“Issues around the Kyrgyz-Uzbek border have been resolved 100 percent,” he said. “There is not a single patch of disputed territory left.”

Kyrgyz villagers in the lands around the reservoir were incensed. Not just at Tashiyev, but also President Sadyr Japarov, a nationalist who has built his political brand on the idea of being close to the people. 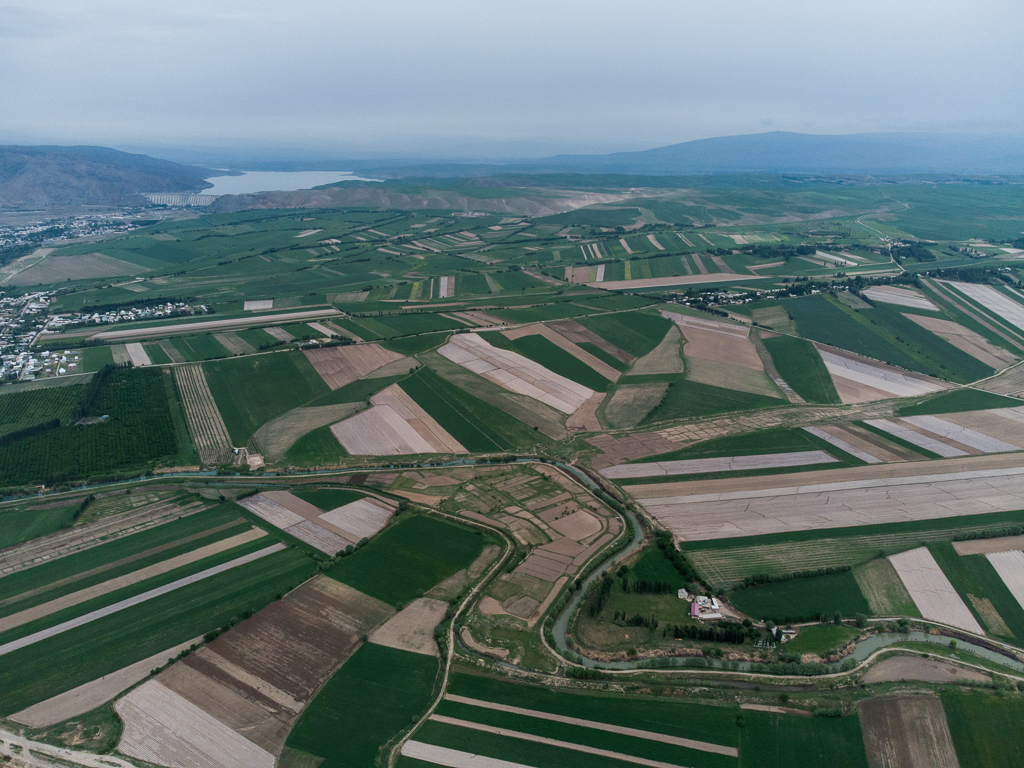 “I think they must have paid Tashiyev and Japarov off, and that that is why they want to give away the water. Who can settle 100 percent of everything just like that? Before going [to Uzbekistan], they should have consulted with us to ask if the land could be given away,” Omorov said. “If they had asked, we would have said no.”

Kempir-Abad reservoir – or Andijan reservoir, as it is known on the other side of the border – sits amid a bucolic scene. In spring, its blue waters are framed by green mountains peppered with poppies. Herds of sheep and cows roam on the slopes, lazily chewing the grass. 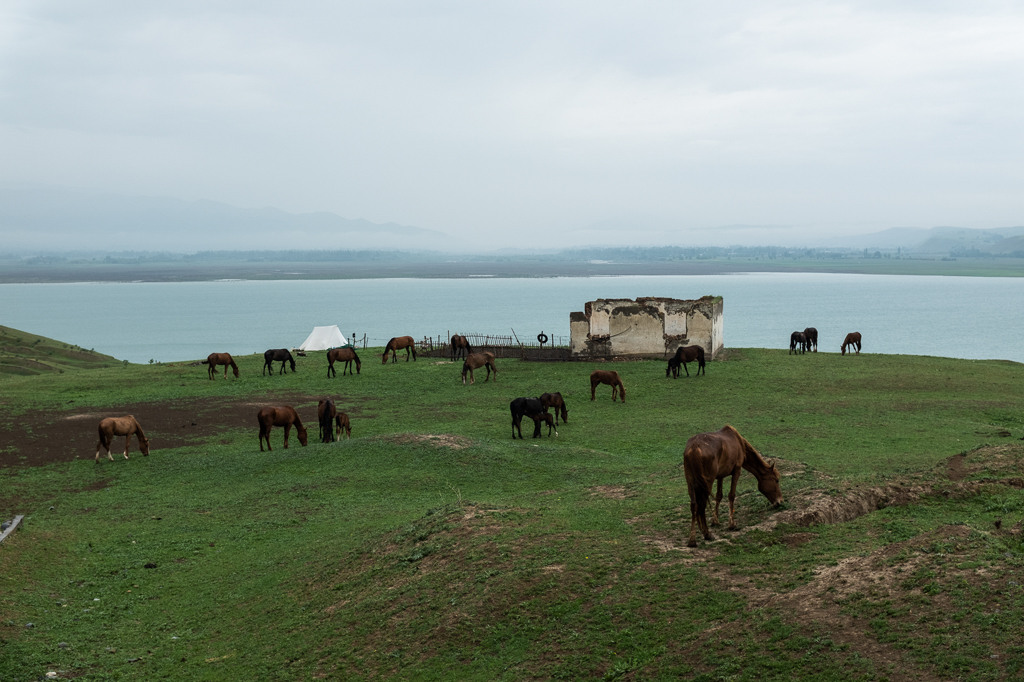 For nearby villagers, the reservoir, which was completed in 1983 by the will of Soviet engineers, is a source of misery and joy. The grazing land skirting the water provides work and sustenance. Livestock drink straight out of the reservoir. Houses perennially sink into ground and are plagued with humidity, however. As for surfaced roads, there is no such thing.

Ilgiz Osmonov, a 34-year-old with a face blistered red from hours toiling in the sun, moved to the edge of the water four years ago from the village of Kyzyl-Oktyabr. He rented 1,500 square meters of land and built the home in which he lives with his wife and four children. He works long hours, digging beds for his crops, fencing vegetable plots and tending to livestock. It has been hard work. Of the 450 apple trees Osmonov planted, only 200 have prospered. Droughts in summer and high soil moisture in spring make striking the right balance difficult.

Until he can make his fruit crops profitable, he is tending cattle for residents of neighboring villages. But if the land transfer to Uzbekistan happens, there may be nowhere for him to feed the 500 or so cows he has been charged with caring for. 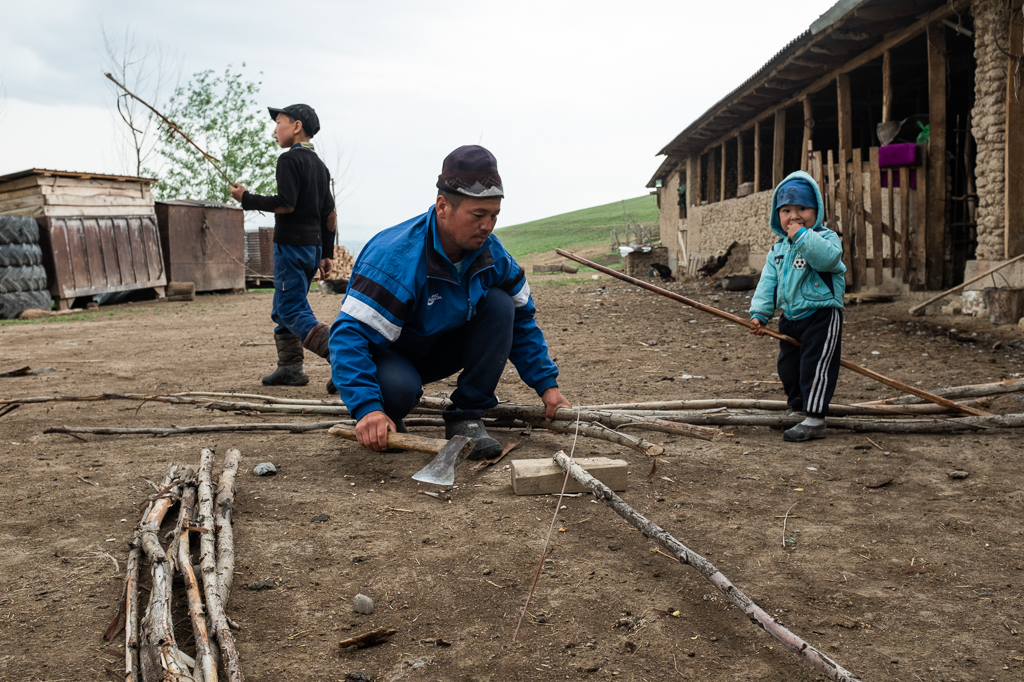 Osmonov’s dream was to be as close to nature as possible. He gave up his smartphone in favor of an old-fashioned model years ago.

No surprise then that he too only learned about the mooted land transfer by word of mouth.

“[Officials] don’t want to get their expensive shoes dirty,” and that is why they didn’t come to the area before hatching their deals, Osmonov told Eurasianet.

“When we heard the news, we immediately thought that if needed, we would fight. No matter what high-ranking official comes, we will not give it up, we will stand to the end,” he said. 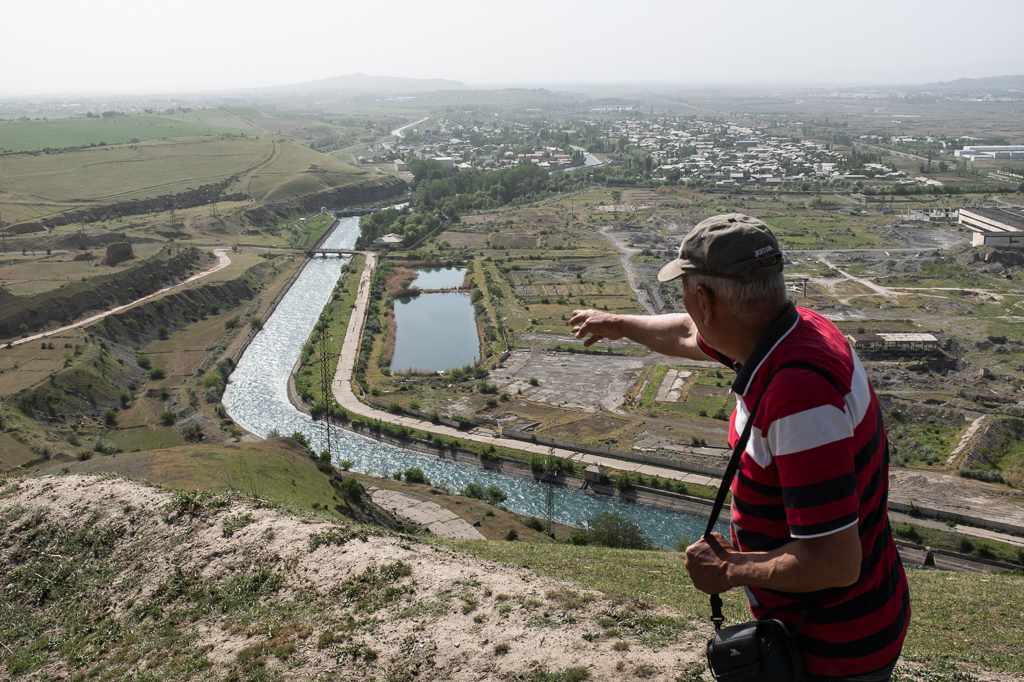 In the absence of useful feedback from officials, speculation has raged about what the Uzbeks might have planned. Osmonov said there is word of them building a resort on the shores of the reservoir and filling it with foreign tourists. Nobody in the villages around likes the idea.

In some sense, the idea of having Uzbekistan take over the reservoir and its contents flows naturally out of how the facility is used. Kyrgyzstan uses 14 percent of the water to irrigate land in the Suzak and Kara-Suu districts, according to Nazirbek Borubaev, the government’s spokesman on border issues. The rest feeds into Uzbekistan, which also controls the two hydroelectricity generators powered by Kempir-Abad.

Anticipating the objections of the local community to a land swap, Tashiyev said while making his “100 percent” remarks that Kempir-Abad would be used jointly.

“There will be no fencing or troops around the reservoir. Residents of Kyrgyzstan will be able to use the water and fish,” he said. 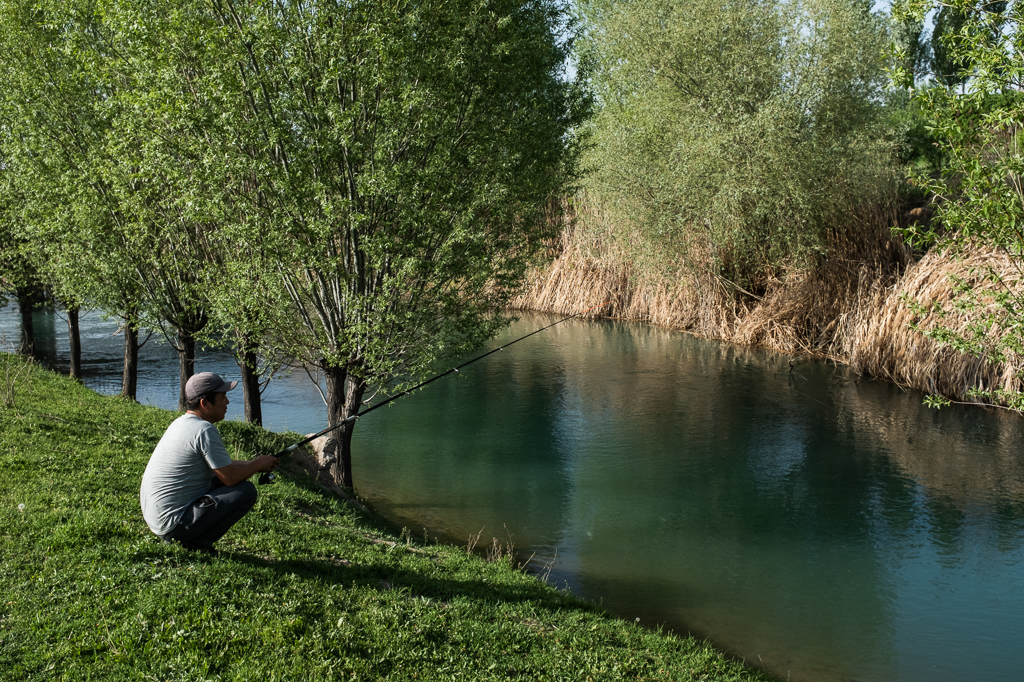 Later, after what appears to have been an unexpected level of pushback, Tashiyev pledged that further negotiations might after all take place and that the March deal could undergo further revisions.

These high-level intra-governmental machinations are only part of what fuels dismay.

The dam that in practical terms marks the boundary between Kyrgyzstan and Uzbekistan marks a stark difference in levels of development. While there is little infrastructure and few residences on the Kyrgyz side, a glance over the dam presents a whole different picture of smooth roads and well-appointed buildings. 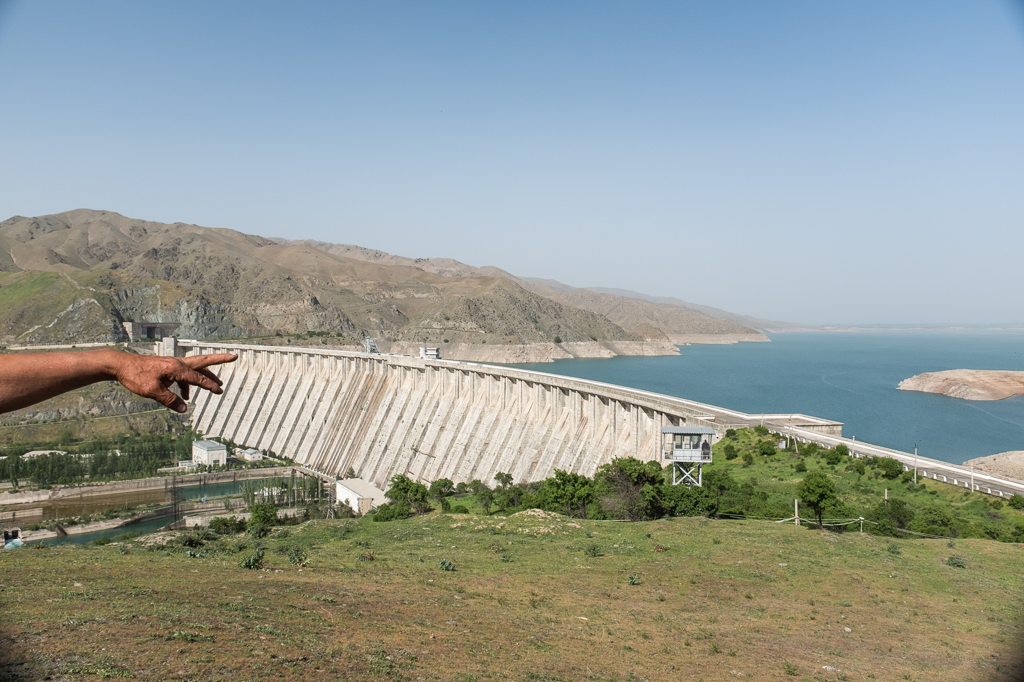 The fencing installed by the two countries could not be more different either. Kyrgyzstan has put up a few concrete pillars, but most of their boundary is rickety pickets holding up a perimeter wire. In some places, there is no fence at all. A careless outsider could easily wander into no-man’s-land without noticing.

The Uzbek operation is visible from Osmonov’s hilltop home. They have strung barbed wire along a row of solid concrete supports spanning the horizon. Border guards monitor the scene from watchtowers.

Their Kyrgyz counterparts do not even have a booth. Until recently, guards had a little hut fashioned out of reeds and branches – a fact that came to light when Osh-based journalist Ydyrys Isakov filmed a report about it. The hut drew widespread online mockery.

“People say they [the authorities] got embarrassed so they dismantled the hut and burned it,” Omorov said. There is only a patch of charred soil now where the hut stood.

For Omorov, this whole episode typifies the government’s lax attitude. He and nearby residents fret that Uzbekistan is stealthily moving the de facto border and that there are no Kyrgyz troops around to keep watch.

“We have appealed to the authorities and told them that the Uzbeks are slowly moving their border, but they do nothing,” Omorov said. “This is a serious matter. The land is leaving us.”