Queer Georgians’ fight for the right to walk the streets of Tbilisi is met with violence and government indifference, but they vowed to continue the struggle. 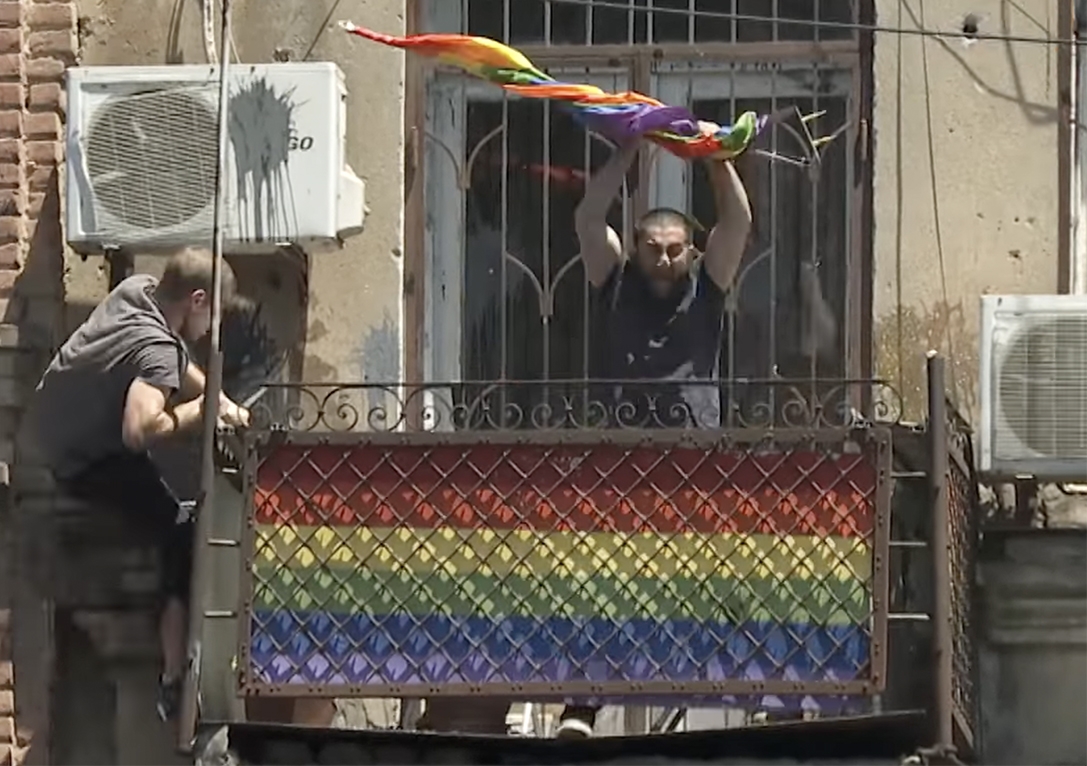 The day after Tbilisi was convulsed by hate-group attacks on LGBTQ+ activists and journalists, the city remained tense as liberals prepared to gather to condemn the violence.

Hate groups rampaged through the streets of Tbilisi for hours on July 5, the day that LGBTQ+ activists planned to hold a public march. In the most emblematic scene of the day’s brutality, a violent crowd gathered at the downtown offices of Tbilisi Pride, the group organizing the LGBTQ+ event. Some of the men climbed the walls, reaching the rainbow flag-decked balcony on the third floor. They tore off the flags from the railing and threw them down to the cheering crowd.

Following several rounds of hide-and-seek with their pursuers, and several changes of the location of the planned March of Dignity, Tbilisi Pride was forced to cancel the event. They blamed the government for failing to provide adequate protection.

Throughout the city, thinly spread police did little to contain the mob violence, led by far-right activists and priests. A mob that by estimates was up to 3,000 strong beat scores of journalists, broke into private apartments and tried to storm the office of an opposition movement, Shame!. A Polish tourist was stabbed, reportedly for wearing an earring, in what local media described as a hate crime.

“They kept kicking me in my face,” recounted Davit Koridze, an RFE/RL reporter, who was attacked along with a colleague. “Police stood 10 meters away…they saw us being attacked by 10 men, heard us screaming but did nothing.”

More than 50 reporters from nearly every Georgian news outlet suffered injuries, prompting an outburst of anger by media companies. “It felt like I was watching a coup,” said popular TV host Diana Trapaidze in a televised discussion later on that day. “A street mob ruled everything today, they were the prime minister and the interior minister … The government just disappeared.”

The violence recalled the first major outbreak of anti-gay riots in the city, in 2013. Since then, queer Georgians have been struggling to exercise their right to gather freely on the streets of Tbilisi. Attempts to hold public events have been met with threats and some degree of violence nearly every year; in 2019, hate groups lay siege to a movie theatre during the premiere of a gay love story set in Georgia.

As in previous instances, the violence on July 5 took on a geopolitical hue, with anti-western sentiments widespread. One angry crowd knocked off the European Union’s flag from the parliament building.

Many pointed the finger at the powerful, conservative Georgian Orthodox Church, which had called on supporters across the nation to gather in Tbilisi for a counterdemonstration against the LGBTQ+ rights march. “Let’s show the world that we are defending our dignity and perversion cannot be forced upon us,” the church said in statement, which also criticized Western diplomats for supporting the Pride event.

TV Formula journalist Rati Tsverava was attacked by anti-pride protesters near the Kashveti Church on Rustaveli Avenue. Tsverava was dragged away in a headlock by Georgian Orthodox priests. #TbilisiPride21

But both Tbilisi Pride and the country’s news media ultimately placed the blame at the feet of the government for its apparent reluctance to confront ultraconservative groups and the priests.

“You know that for the majority of the population holding such rally is unacceptable and therefore I believe that this rally should not be held on Rustaveli Avenue,” Tbilisi’s central prospect, Prime Minister Irakli Gharibashvili said early on July 5.

The prime minister also did what the ruling Georgian Dream party often does in critical situations: blame their most hated rival and a punching bag, former president Mikheil Saakashvili. “I’m afraid behind the organizers of today rallies is the vengeful opposition, with Saakashvili in charge,” Gharibashvili said.

“The government’s inaction jeopardized health and safety of Georgian citizens,” Tbilisi Pride said in a statement. The activists singled out Gharibashvili, calling his comments “shameful, violent, anti-state and anti-Western.”

The nation’s top media companies also lambasted Gharibashvili, blaming him for allowing the radical groups to feel a sense of impunity and for pandering to ultraconservative sentiments for his own political gain. The mobs also attacked opposition protesters who have long been camped out in tents in front of the parliament building, even though those protests have no connection to the pride event.

The authorities also faced waves of international criticism coming from everywhere from Brussels to Washington. “The authorities have the human rights obligations to uphold free[dom of] expressions and assembly, ensure demonstrators and journalists’ safety, and punish the perpetrators,” the Council of Europe’s Commissioner for Human Rights Dunja Mijatović said.

But despite the mass violence, only a dozen individuals have been arraigned so far and violence continued on July 6. Explosives were thrown into the office of Human Rights House, a local rights organization, and at least one employee was injured.

For all the violence, the shocking events also appeared to galvanize a sense of solidarity with the LGBTQ+ rights movement. Most news companies, incensed by violence against their employees, vowed to fight against radical groups and their supporters in the Church and the government. Many liberal Georgians and groups announced plans to gather on the evening of July 6 for a demonstration against violence and in solidarity with the LGBTQ+ rights movement.

Solidarity is, in fact, what Tbilisi Pride was asking for in the first place. As the group said in a video released prior to the planned march: “express solidarity with us and be on the side of love.”