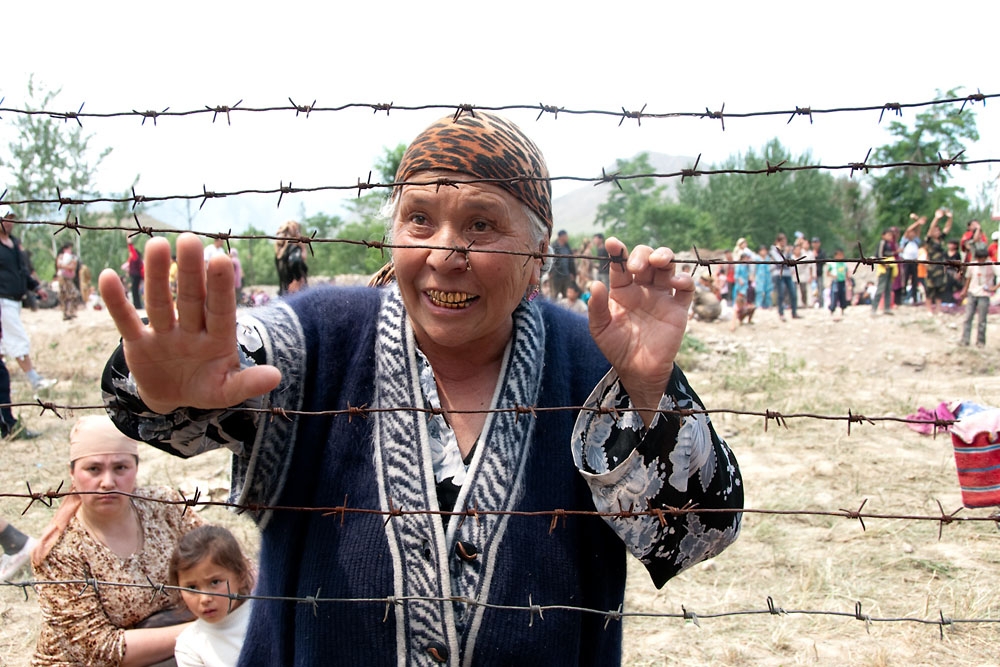 An Uzbek woman waits for her family to cross the border from Kyrgyzstan. (Photo: Dalton Bennett)

Interethnic clashes spread in southern Kyrgyzstan on June 12, as the provisional government struggled to stop the violence and Russia expressed reluctance to quickly intervene.As the violence entered its third day, Uzbeks, who comprise perhaps a third of the population in southern Kyrgyzstan, appeared to be a minority group under siege. Some Uzbek families in Osh City were reportedly trying to go into hiding, or barricade themselves inside their homes. Thousands of others were seeking a safe haven in neighboring Uzbekistan.Panic gripped predominantly Uzbek areas elsewhere, including the towns of Aravan, Tepekurgan, Chekabad and Nurabad. Some residents hastily fled their homes and headed for the Uzbek border when rumors began to circulate that Kyrgyz mobs were preparing to enter the towns. "Intervention from outside countries is of urgent need here. Whatever is going to stop this unrest, we are for it," said an ethnic Uzbek in Aravan, situated about 20 kilometers from Osh, near the Uzbek border. So far, at least 69 deaths have been confirmed as a result of the interethnic clashes.Uzbekistan's state border remained officially closed on June 12, although witnesses described overwhelmed border guards as unable to completely stop the flood of refugees from entering the country. Uzbek border officials said they had not received orders from Tashkent on whether to admit would-be refugees from Kyrgyzstan. In some areas along the border, those attempting to flee were setting up makeshift camps. In Osh, eyewitnesses described pitched gun battles, adding that rampaging crowds forcibly seized military vehicles and armaments from overmatched security forces. Armed with Molotov cocktails, guns, stones and metal rods, crowds of ethnic Kyrgyz men set fire to Osh's Uzbek neighborhoods of Cheremyshki, Kalinino, Majrimtal and Onadyr overnight on June 11-12. Violence spread to the southern Kyrgyz city of Jalal-Abad on June 12. According to the AKIpress news agency, the local offices of state television was set ablaze and sporadic gunfire could be heard. There were unconfirmed reports of casualties.After Russia declined to immediately respond to a Kyrgyz provisional government appeal to send in Russian troops, Roza Otunbayeva, Kyrgyzstan's provisional president, issued a decree ordering the partial mobilization of the armed forces, with the apparent intention of using the country's military in a domestic context. The partial mobilization would commence on June 13, according to the decree, as reported by AKIpress.    On June 12, provisional leaders also reinstated the popular former Osh police chief, Kursand Asanov. Together with several planeloads of riot police brought in from Bishkek, Asanov appeared to have calmed the situation in the most severely affected Uzbek neighborhoods of Osh. Gun battles were continuing in other parts of the city, however.In comments broadcast on state television, Asanov announced that he would vigorously enforce the state of emergency, adding that he had ordered security forces to shoot anyone who is armed and "is behaving aggressively." Security is not the only concern now for Osh residents. With the city sealed off for a second day, residents began reporting shortages of food and water. A medical worker also told EurasiaNet.org that hospitals were experiencing shortages of essential supplies, including blood. The medical worker added that some deaths could be attributed to the lack of medical equipment and supplies.Provisional government officials have asserted that supporters of former president Kurmanbek Bakiyiev are fomenting the violence, although no hard evidence has been produced to support such allegations. However, some former Bakiyev loyalists are striving to exploit the uncertain situation. In Aravan, for example, Shamil Artykov, a Bakiyev appointee who was ousted in April, retook control over the local administration with the help of a group of armed supporters on June 12. Artykov has promised to restore order, but Uzbeks in Aravan - a majority in the town - remained wary. Many said the town's security is dependent on the ability of an Interior Ministry cordon between Osh and Aravan to keep armed bands of Kyrgyz away.

Alisher Khamidov is a journalist based in Osh.