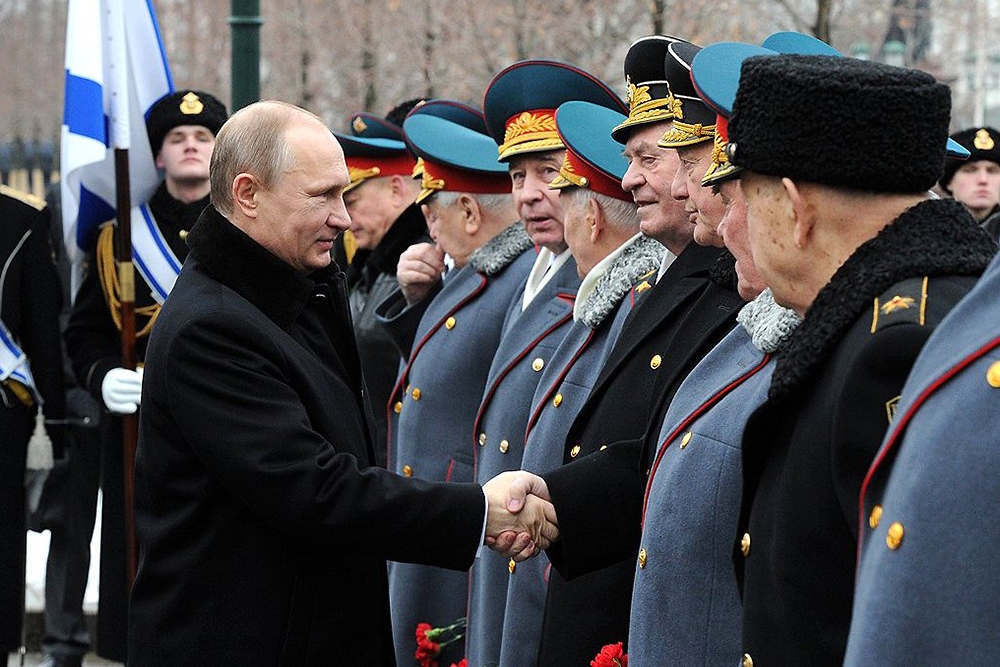 After laying a wreath at the Tomb of the Unknown Soldier near the Kremlin wall, Putin greets Russian military leaders on Feb. 23, 2015. Putin’s understanding of the imperial nature of the Russian state could potentially hamper his ability to craft policies that give the country the best chance of avoiding a repeat of history, analysts contend. (Photo: Russian Presidential Press Service)

As Russia’s economic crisis deepens, President Vladimir Putin will need to turn his attention to keeping the lid on domestic discontent. But Putin’s understanding of the imperial nature of the Russian state could potentially hamper his ability to craft policies that give the country the best chance of avoiding a repeat of history.

Putin and his closest Kremlin allies belong to a generation of Russians molded by the last decades of communism, and were traumatized by the implosion of the Soviet state. To them, the events of 1991 were a “major geopolitical catastrophe.” Although clearly cognizant of the past, and rueful of its consequences, Putin’s interpretation of Russia’s history raises questions about whether he has learned the lessons needed to manage the country’s eternal ‘nationalities’ question.

Blame for the Soviet collapse, in Putin’s view, rests squarely with Bolshevik leader Vladimir Lenin. Already in 1991, while serving as an official at St. Petersburg mayoral office, Putin sharply criticized Lenin’s nationality policies, charging the Bolsheviks with “planting a time bomb under the edifice of a unitary state that is called Russia.” Leninists, he continued, “divided our [unified] Fatherland into separate principalities that heretofore never figured on the map of the world.”

Putin has pushed the “Lenin ruined Russia” meme at several recent public appearances. At a January 21 meeting of the Presidential Council for Science and Education, for example, Putin attacked the constitutional design that Lenin suggested for the Soviet communist state. “In the end that idea led to the fall of the Soviet Union,” he said. “They planted an atomic bomb under the building that is called Russia that later exploded.”

Several days later, at the regional forum of the All-Russian People’s Front in Stavropol, Putin elaborated on this theme. Stalin, he argued, was right in his 1922 polemic with Lenin when he urged a more centralist approach, under which all former borderlands would be included as autonomous units into the Russian Republic. Lenin’s federalist blueprint, one that provided subjects of the Soviet federation with the ability to secede proved deeply flawed, Putin contended: “Combined with the inefficient economic and social policies [in the end of the 1980s], it ultimately led to the disintegration of the state.”

This is a simplistic view of the past, and it indicates Putin does not seem to fully grasp the complex socio-political dynamics that, first, caused the Russian Empire’s collapse, and, then, brought about the rise and fall of the Union of Soviet Socialist Republics. He simply blames Lenin and the Bolsheviks for everything, their chief crime being the pursuit of a policy of territorializing ethnicity and creating union and autonomous national republics out of “historic Russia.” Putin appears oblivious of the fact that such a policy was a necessary concession that Lenin had to make to reestablish central control over the rebellious borderlands in the aftermath of the 1917 Revolution and civil war.

There is no doubt Putin has a genuine interest in Russia’s past, and that his understanding of history exerts influence over his worldview today. In their excellent book, Mr. Putin: Operative in the Kremlin, authors Fiona Hill and Clifford Gaddy describe one of his underlying personality traits as “history man.” Yet Putin, like most politicians, is largely concerned with the present. He is also a champion of a strong centralized state, and clearly nostalgic for a “historic Russia” that is “one and indivisible.”

The growing challenge for Putin today is blending his views of historic Russia with effective policymaking that addresses growing restiveness in the country’s regions. As was the case in the years leading up to 1917 and 1991, discontent today is fueled by a dysfunctional economy.

It might be that the decentralization of power could relieve some of the pressure that the Russian state is now coming under. But given his stated opinions of past experiences, Putin likely views ethno-federalism as too shaky a foundation upon which to place a solid state. The sorry fates of two 20th century ethno-federations – the Soviet Union and Yugoslavia – serve to reinforce this thesis.

To best weather the current economic crisis, the Russian Federation’s structure could benefit from reform. The big question, then, is this: how best can Putin reform a system that contains a number of ethnic autonomous republics? Most Russian ethno-nationalists, including the authors of a recent study, strongly believe that simmering separatist sentiment in Russia’s ethnic republics demonstrates that the devolution of power from the Kremlin runs a significant risk for the territorial integrity of the state as it could further empower local elites. According to the nationalist commentator Pavel Svyatenkov, the continuation of “Leninist nationality policy” in contemporary Russia could ultimately result in the country’s disintegration – a scenario resembling that which brought down the Soviet Union.

Russian nationalists, seemingly ignoring today’s economic realities, yearn for the restoration of a “great” Russia, one capable of projecting its power on a global scale. In his January column in the fiercely pro-Putin Izvestia daily, Yegor Kholmogorov expressed hope that “within the next decade, Putin will resolve all fundamental problems with Russia’s unity that are the legacy of Lenin’s rule – both the problem of the theft of purely Russian territories by neighbors, and the problem of crypto-separatism inside Russia.”

Putin’s agenda is likely much more modest. His paramount concern is perpetuating his rule. Thus, he is not interested in overhauling the federation in a way that might antagonize powerful elites in ethnic republics. Rather, his preferred modus operandi is to make individual deals with regional leaders – like he did with Chechnya’s Ramzan Kadyrov.

Ultimately, though, Putin’s anti-Lenin crusade does have a purpose. He deploys the notion of “(historic) Russia’s unity” to discipline society and to persuade nationalists he is “one of them.” By invoking a threat of “disintegration,” Putin also hopes to turn Russians’ attention away from the mounting failures of his increasingly erratic policies.