Some are speaking out against the conflict despite fears the government’s strong support for Azerbaijan could fuel nationalist reprisals. 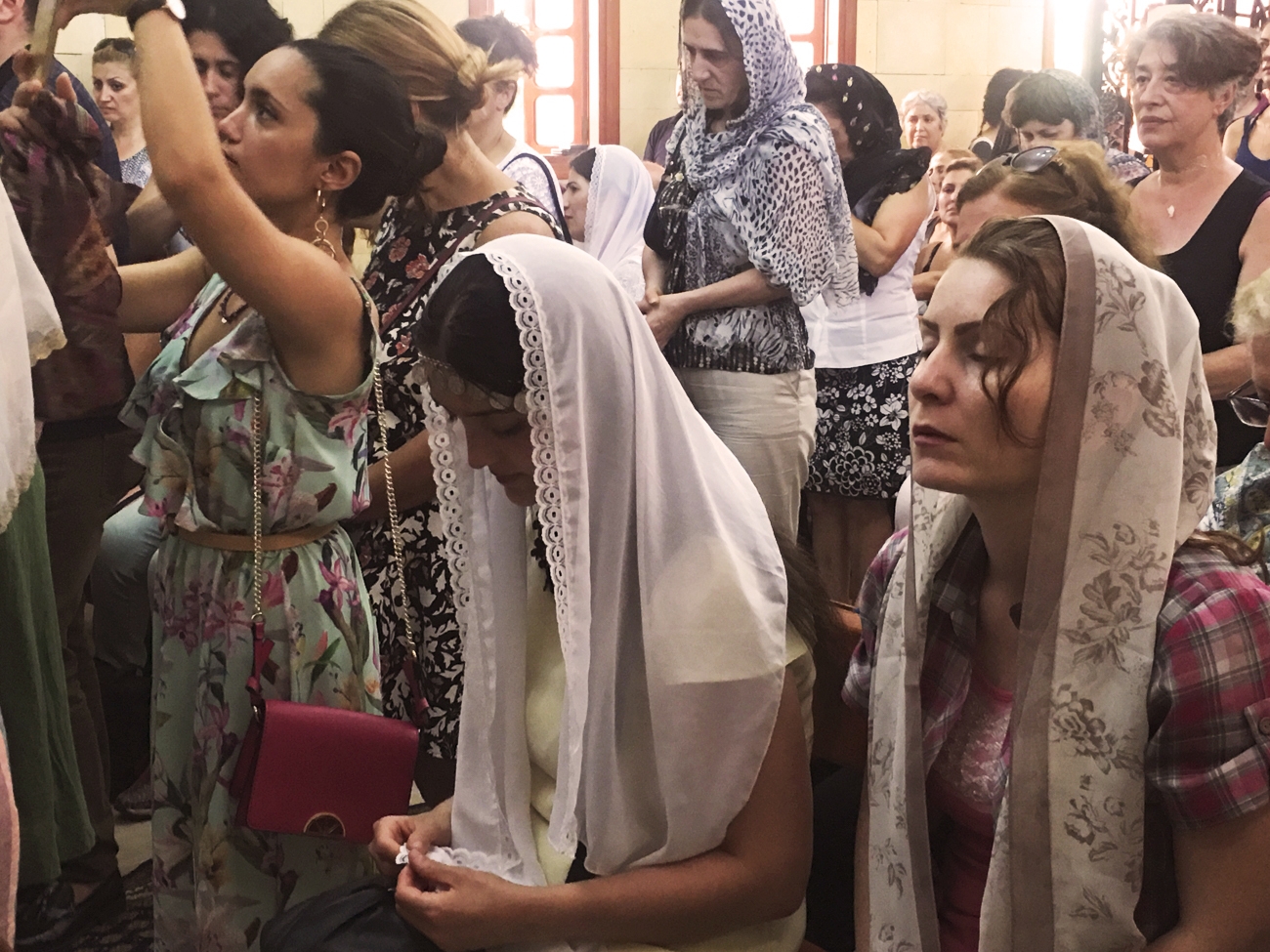 When Norayr Olgar turns on the news in Turkey these days, the topic is likely the war between neighboring Armenia and Azerbaijan. For Olgar, a member of Istanbul’s small Armenian community, it’s an uncomfortable experience.

The relentless coverage of Azerbaijani advances feels surreal, he said, a dehumanized, one-sided account that “looks like a computer game” and ignores the human toll of the war.

“They describe how the sites are struck and destroyed, as if there are no people living there, just objects moving around in a game. They are egging on the conflict,” said Olgar, 28. “As Armenians living in Turkey, we know the media can make us direct targets, and we are anxious.”

Turkey’s strong military and political support to its ally Azerbaijan, as well as its feverish media coverage of the conflict, has rattled Turkey’s population of about 50,000 ethnic Armenians, worried they could face nationalist reprisals for a conflict in which they have no part.

Those fears aside, Olgar and other Armenian activists in the group Nor Zartonk published a call for peace between Armenians and Azerbaijanis.

“It’s important to call for dialogue in Turkey, which has backed the war and has all but become a party to it,” Olgar told Eurasianet. “It is unfortunate that more people are not raising their voices, but remaining silent was not an option for us, because that would mean we were accepting it.”

While Armenians have staged solidarity protests across Europe and the United States, defending peace is a particularly brave stance in Turkey, where even the government’s political opponents are cheering on Azerbaijan.

In opinion polls, Turks identify Azerbaijan as their nation’s best friend, the close linguistic and cultural ties embodied in the political slogan “one nation, two states.” Another recent poll showed more than half of respondents believe Turkey should supply Azerbaijan with some degree of military assistance.

Meanwhile, Turkey does not have relations with Armenia. Ankara sealed its border and severed diplomatic ties with Yerevan in 1993 to protest Armenians’ seizure of Azerbaijani territory. The century-old genocide of as many as 1.5 million ethnic Armenians in the Ottoman Empire also has haunted attempts at rapprochement.

But its involvement had previously been restrained. It is a member of the Minsk Group, the international body that mediates between the two sides in the festering conflict.

This time, though, President Recep Tayyip Erdoğan has vigorously backed Azerbaijan, rejecting international calls for a cease-fire until Armenian forces completely withdraw from the Azerbaijani territory they have controlled since the 1990s.

Armenia blames Turkey’s “active engagement” for goading Azerbaijan, accusing Turkey of sending military aircraft and Syrian mercenaries to fight on Azerbaijan’s side, allegations Ankara vehemently denies. But Turkey’s newly aggressive stance in the Caucasus coincides with a wider, combative foreign policy that has embroiled it in conflicts in Syria, Libya and the eastern Mediterranean.

“Turkey has always stood by Azerbaijan, but its military support now amounts to entry into the war, and this policy is deeply unsettling in a country that’s home to both ethnic Azerbaijanis and Armenians,” Garo Paylan, an opposition lawmaker of Armenian descent, told Eurasianet. “The government is fueling a wave of nationalism, frightening the handful of Armenians still here. […] This is playing with fire.”

Paylan has criticized Turkey for “pouring fuel on the fire” in tweets and statements to the news outlets that will listen. That sparked a backlash, including from a rightwing research center that took out a full-page ad in newspapers to accuse him of “treason” and demand prosecutors investigate him.

“I am a target because of my Armenian identity, but also because I called for peace. To convince society that this war is necessary, they are trying to silence those who say it is not,” said Paylan, whose Peoples’ Democratic Party is the only one in parliament to condemn the war and the Turkish government’s role in abetting it.

Hundreds of people signed a joint statement expressing solidarity with Paylan, arguing the advertisement put him in danger, although their declaration stopped short of denouncing the violence in the Caucasus.

Public support for Azerbaijan is far more visible. Within hours of the start of fighting on September 27, ultranationalists in cars draped with Azerbaijani and Turkish flags drove through the neighborhood near the seat of the Armenian church and where many of Istanbul’s estimated 10,000 Armenian nationals live.

A week later, another convoy of cars blasted horns and drove past the site where Hrant Dink, an Armenian-Turkish newspaper editor, was shot dead outside of his office in 2007 in a neighborhood where many Christians live. That rally was organized by a religious charity close to the government, a conservative newspaper reported.

The Turkish authorities increased security around the patriarchate, and one senior official said Armenians here should not be blamed for the war. Another said the government would not allow “threats or harassment” of Armenians in Turkey and suggested such acts were in fact an attempt to undermine Ankara’s support for Baku.

“The risk is that if the war escalates, these [nationalist] groups could be incited” into outright violence, said Murad Mıhçı, an ethnic Armenian writer who has received “countless” threats since fighting broke out. He said he’s not alone: “People who have nothing to do with politics but bear an Armenian name have been affected.”

Minorities in Turkey have historically suffered during their government’s previous squabbles with other countries, and the population of Christians and Jews – a fifth of the population a century ago – is now about 120,000 people in a country of 82 million.

Armenians have been migrating out of Turkey, part of a wider exodus caused by economic instability and an increasingly restrictive political environment during 17 years of Erdoğan’s rule. Minorities are easy scapegoats as the government stokes nationalist sentiment to distract voters from a sharp economic contraction that has sunk the ruling party’s support near historic lows, Mıhçı said.

“The easiest way to accomplish this is to use those whose numbers are few in Turkey. This isn’t something new,” he said. “Our numbers were already declining … and I would expect they would now fall further amid concerns about the future and Turkey’s democratic position.”

Even before the new clashes in the Caucasus, Armenians in Turkey were on edge. Three churches were vandalized earlier this year, with one suspect saying he set a gate on fire because he believed Armenians spread coronavirus. Armenians are the top target of hate speech in Turkey, according to research by the Hrant Dink Foundation, which tracks discrimination in the media.

The foundation was created in memory of the slain newspaper editor, whose death is a raw reminder of the perils of speaking out. The mild-mannered Dink advocated for reestablishing ties between Turkey and Armenia and reconciling with the century-old genocide, which Turkey still officially denies took place. More than 13 years after his death, the trial of 76 former officials accused of complicity in his killing is still underway.

Dink’s murder weighs on Paylan, who is flanked by bodyguards when he’s outside of parliament and has been punched by ruling party lawmakers inside the building. He has also faced criminal probes for political speeches about the genocide.

“Remaining silent does not guarantee my safety,” Paylan said. “Our collective memory tells us this. In the end, continuing our existence here isn’t up to us, but will be decided by the rest of society standing up for us.”