War in Ukraine spills over into rising Karabakh unrest

As Russian forces perform more poorly than expected in Ukraine, the Russian peacekeeping mission in Karabakh is coming under increased scrutiny. 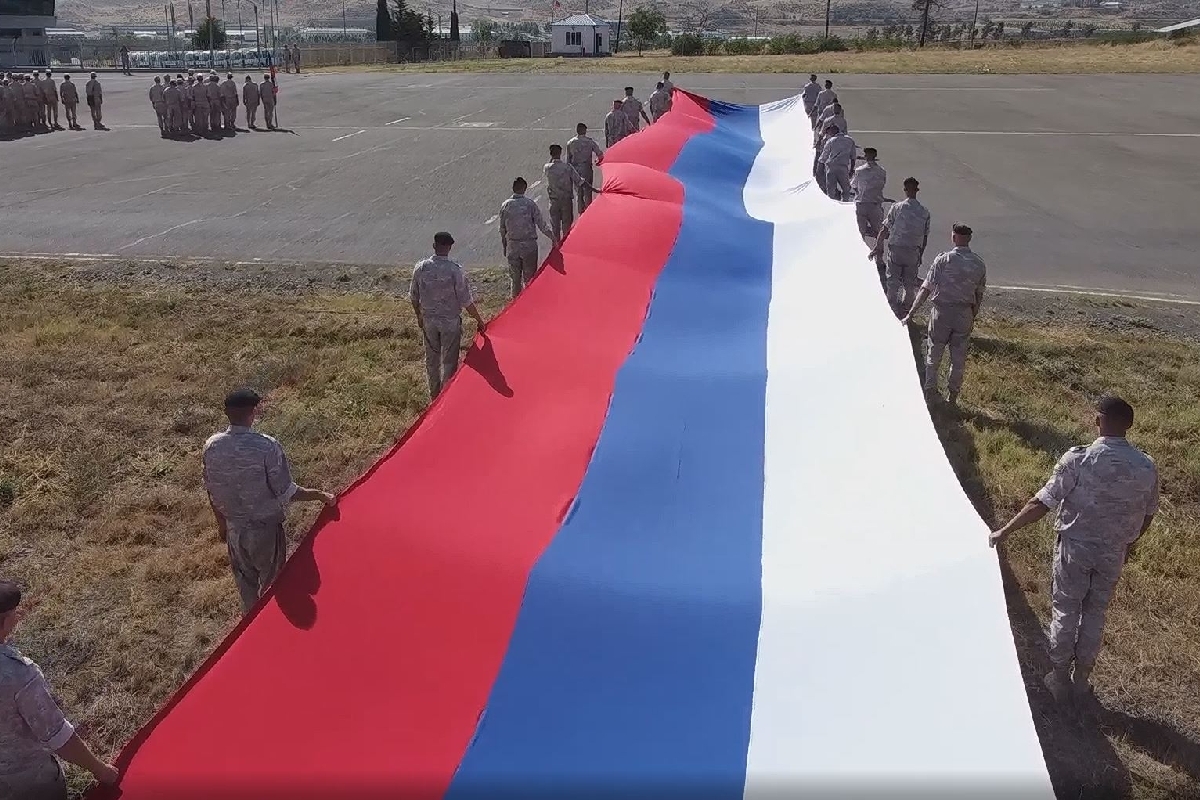 Russian peacekeeping troops in Karabakh unfurl their country's flag at a military base there in August 2021. (photo: mil.ru)

While war rages in Ukraine, tension is spiking in another post-Soviet hotspot: Karabakh.

Since early March, just following Russia’s invasion of Ukraine, reports of ceasefire violations have accelerated. At the same time, Baku has launched a rhetorical campaign aimed at discrediting the Russian peacekeeping force in Karabakh.

Reports of increased firing began about March 5 from both the Azerbaijani military and the authorities of the self-proclaimed, Armenian-led Nagorno Karabakh Republic. Karabakh authorities report that heavy firing from the Azerbaijani side has continued, and that Azerbaijanis have been broadcasting messages into Armenian-populated villages telling them to leave.

A critical gas pipeline supplying Karabakh also has been damaged – by the Azerbaijanis, the Karabakh authorities say – leaving the population there without means to heat their homes for several days.

It is the sharpest increase in tensions in some time. And both sides are connecting it to the war in Ukraine.

Armenians argue that Azerbaijanis are taking advantage of a distracted world, and a Russian military that has its hands full in Ukraine, to press its advantage in Karabakh. In the 2020 war Azerbaijan regained much of the territory it had lost to Armenians in the first war between the two sides in the 1990s. But it continues to seek control over the remaining portion, which is now patrolled by a 2,000-strong Russian peacekeeping force.

“In recent days, taking advantage of the whole world's and especially Russia’s preoccupation with the situation in Ukraine, the provocations and threats carried out by Azerbaijan against the peaceful population of Artsakh have drastically increased,” Artak Beglaryan, state minister of the self-proclaimed Nagorno-Karabakh Republic, said on March 11. (Artsakh is an alternate Armenian word for Karabakh.)

“The steps happening today aim at discrediting also the Russian role in Artsakh and the South Caucasus in general, which means that the deeper the crisis over Ukraine, the more noticeable these attacks on Russia at different levels will be,” said Tigran Abrahamyan, a member of Armenia’s parliament.

The messages from Baku have been mixed, but indicate a concerted effort to highlight the inadequacies and weaknesses of the Russian peacekeepers.

A March 7 article in the pro-government Report.az highlighted the recent ceasefire violations, which it blamed on the Armenian side: “Responsibility for maintaining the ceasefire lies entirely on the Russian peacekeepers. That means that either the peacekeepers are unable to manage the functions they have been tasked with, or they are just letting the Armenians do it.”

Another article published on the same day, in the military news website Caliber.az, claimed that the commander of the Russian peacekeeping force was involved in a variety of corrupt businesses in Karabakh (for which the article offered no evidence) and as a result had become beholden to the Armenian authorities in Karabakh.

“Over the last several weeks the degree of tension in Karabakh is rising … but who or what is giving the bandits in Karabakh such audacity?” the article asked. “The main figure on which the bandits are relying is the current commander of the peacekeepers, Major General Andrey Volkov.”

At the same time a video of a column of Russian military vehicles traveling along the Lachin corridor, the road between Karabakh and Armenia, was widely distributed on Azerbaijani social media networks.

“It can be supposed that they are being redeployed to Ukraine,” Caliber wrote on March 9, again without evidence. “According to another version, part of the Russian peacekeeping forces will be redeployed to the 102nd military base at Gyumri, and soldiers at that base will in turn be sent to help the Russian army in Ukraine.”

The authorities in Karabakh denied that any Russians were leaving in a March 10 statement. The Russian peacekeepers themselves have not commented. While the Russian mission used to issue near-daily updates on its activities in Karabakh, it now hasn’t issued a single press release since January 26.

A third line of criticism being raised against the Russian peacekeepers is that they themselves present a threat to Azerbaijan.

Elman Mamedov, a member of parliament, compared the situation to that of Georgia in 2008, when Georgian forces attacked South Ossetia, and Russia – citing the fact that its peacekeepers were based there and came under attack – hit back forcefully. “Russian soldiers were in South Ossetia as peacekeepers,” Mamedov told reporters. “Georgia decided to carry out an operation to restore its territorial integrity. Russia considered that to be a danger to its peacekeepers. The result is known to everyone.”

As usual, this rhetorical work is being done by pro-government media or lesser figures while government officials themselves remain quiet. The curious exception has been a complaint from the Ministry of Defense about a comment by a Russian military official that likely otherwise would have gone unnoticed.

In a March 7 briefing about humanitarian responses to Ukraine, a Russian military official briefly mentioned an aid shipment organized by “Nagorno-Karabakh.” While he was presumably referring to the Armenian-controlled self-proclaimed republic, which did send some aid, the Azerbaijan MoD’s complaint focused solely on the toponym.

Meanwhile, Armenians in Karabakh report that villages there continue to be under Azerbaijani attack, including by heavy weaponry. The village of Khnapat was shelled on March 11, and residents of the village of Taghavard reported getting messages over loudspeakers from Azerbaijani forces telling them to evacuate.