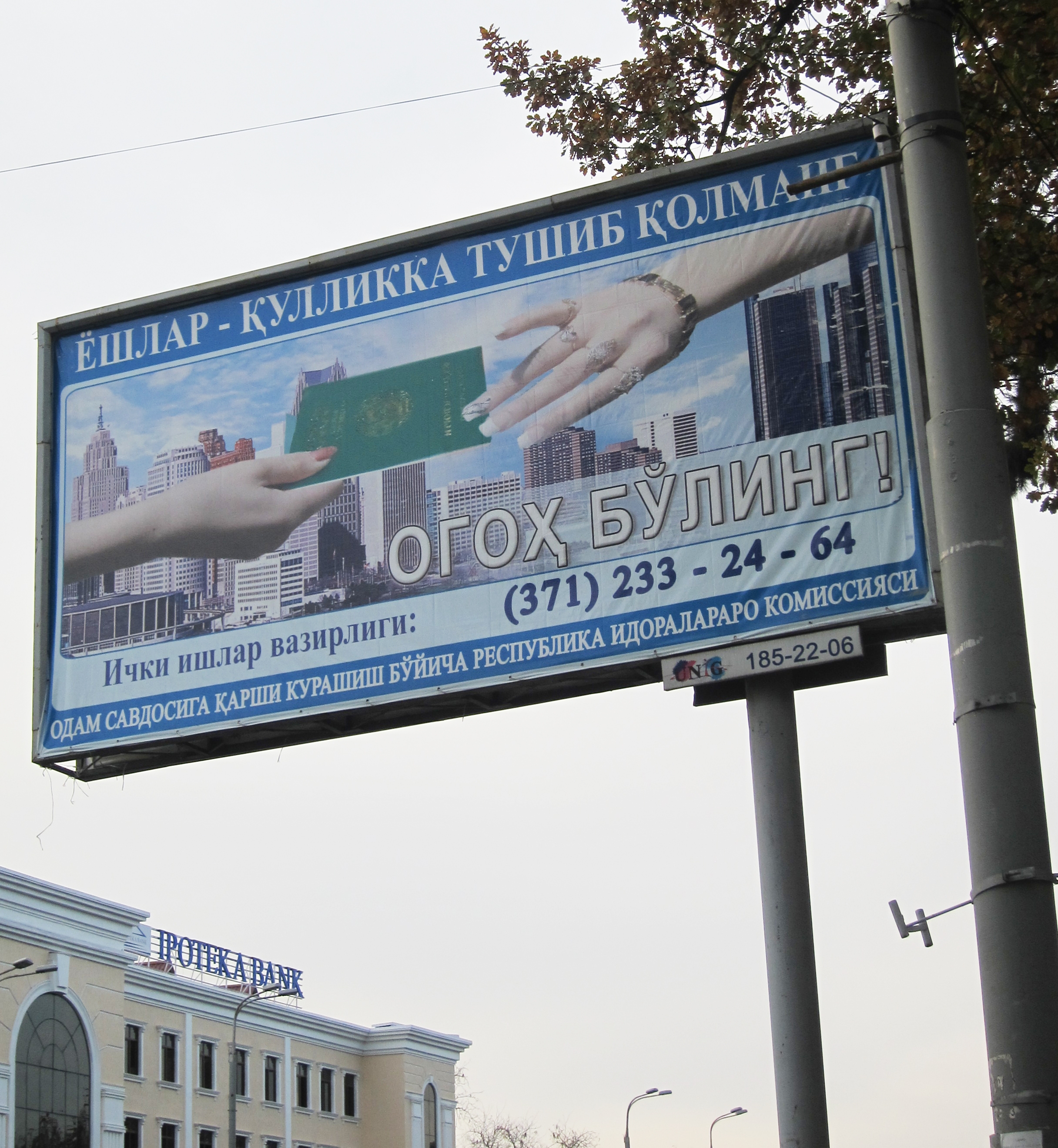 A poster in Tashkent offers a warning about human trafficking. Joanna Lillis

The United States has given Uzbekistan the lowest possible rating in its annual report on human trafficking and forced labor. Uzbekistan was downgraded (along with Russia and China) from Tier 2 to Tier 3 in the State Department’s annual Trafficking in Persons report for failing to make sufficient efforts to combat the trade in human flesh. The June 19 report had harsh words for Tashkent: “The Government of Uzbekistan remains one of only a handful of governments around the world that subjects its citizens to forced labor through implementation of state policy.” The use of forced labor in the cotton harvest featured strongly in the findings: “Internal labor trafficking remains prevalent during the annual cotton harvest, in which children and adults are victims of government-organized forced labor. There were reports that working conditions in some fields during the cotton harvest included verbal and physical abuse and lack of freedom of movement.”There was no immediate reaction from Tashkent, which has always denied state-sponsored forced labor and points to its efforts to combat people trafficking.The US report noted that last year Tashkent enforced a decree banning child labor in the cotton fields, resulting in a “sweeping reduction” in the number of children under age 15 in the harvest, but said that older children and adults were still being forced to reap cotton.Uzbekistan has refused repeated requests to allow the International Labor Organization to monitor the harvest of a crop so vital to Uzbekistan’s economy that it is dubbed “white gold.” The harvest is effectively reliant on forced labor, since government-set cotton quotas that farmers must meet for artificially low prices make it unfeasible to pay a living wage.The report also noted concerns about forced labor in other sectors and about human trafficking and sex trafficking within Uzbekistan and to countries including Kazakhstan, Russia, Turkey, Malaysia, Thailand, and UAE.Anti-trafficking efforts over the past year were “mixed,” the State Department said. Tashkent had identified more sex trafficking and transnational labor trafficking victims in 2012 than in 2011, and last year convicted eight officials on charges of complicity in trafficking. In one case, however, a citizen’s allegations of official involvement in trafficking her brothers “resulted in what appeared to be an effort to silence her” – she was jailed for seven years on extortion charges but released on amnesty after seven months.The report’s recommendations included taking “substantive action” to end forced labor, including child labor, in the cotton harvest; allowing international monitoring; prosecuting officials suspected of complicity in trafficking; and providing better support for trafficking victims.The downgrade for Uzbekistan to the lowest-possible rating came after six years on the report’s Tier 2 Watch List.
Follow @joannalillis