Now that the five-nation dispute over the sea’s status is settled, Putin believes the next step is luxury cruising. 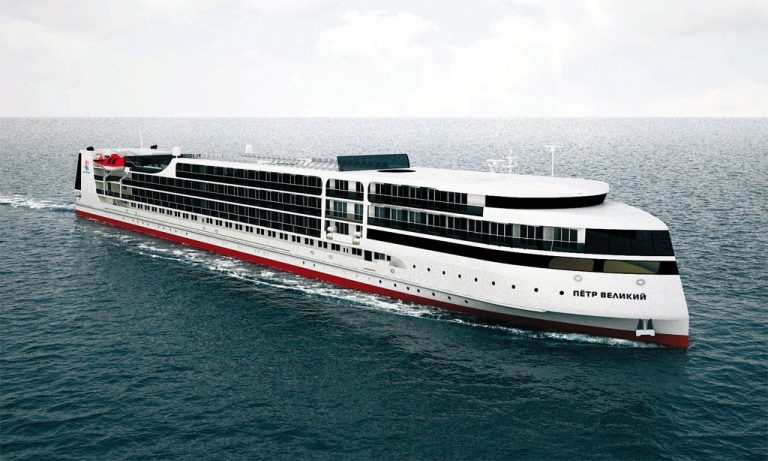 Plans for the Peter the Great cruise ship, currently under construction in Astrakhan, which will start touring the Caspian Sea next summer. (photo: mosturflot.ru)

Cruising aficionados take note. Starting next summer a new Russian cruise liner will be offering tours of an unlikely destination: the Caspian Sea.

Russia and Azerbaijan are drawing up plans to put the fossil fuel-rich Caspian Sea to a new use as the next big leisure destination. The Russian-built, 310-passenger cruise ship Peter the Great will make its maiden voyage next year, making calls in ports in the five countries that share the sea: Russia, Azerbaijan, Kazakhstan, Turkmenistan and Iran.

Not only are those unlikely tourist destinations – Aktau and Turkmenbashi are rarely mentioned in the same breath as the Bahamas and Venice – but they represent one of the greatest geographical concentrations of autocracy in the world.

The scheme has been personally endorsed by Russian President Vladimir Putin; on a recent visit to Aktau, Kazakhstan’s main Caspian port, he cited statistics suggesting that the region could attract a million tourists a year, as long as “proper modern tourism infrastructure is in place.”

The Caspian Sea, the largest landlocked body of water in the world, is not known for popular beaches or tourism infrastructure, but Russia and Azerbaijan are working on it. The two countries agreed to upgrade tourism infrastructure across the Caspian coast to better entertain passengers – mainly Russians, but also Europeans and Americans – of the Peter the Great and other prospective cruise ships.

Promoters say that cruise prospects have opened up now that the five Caspian countries have resolved their 20-year-long dispute about the status of the sea. They concluded that the Caspian Sea is, well, a sea, although some argued that the fact that it has no open access to oceans means it is a lake.

The sea-or-lake dispute had less to do with geography and ultimately focused on the delineation of energy resources. The Caspian Sea boasts estimated reserves of 50 billion barrels of oil and up to 9 trillion cubic meters of natural gas. Defining its status has implications for who gets what share of these reserves.

With the status question resolved, the littoral states, especially Russia and Azerbaijan, have moved on to focus on the Caspian Sea’s tourism potential. Cruises are seen as a key to tapping this potential. “It will be a new, high-end tourism service that is now missing,” said Oleg Safonov, head of Russian Federal Tourism Agency.

The Peter the Great is currently under construction at a shipyard in Astrakhan, Russia’s main Caspian port. Once the Caspian cruises are established the ship will venture further afield, traveling upstream on the Volga River to the Don River and then down to the Azov and Black Seas, to reach less repressive destinations there.