Eurasianet’s Kyrgyzstan-based photojournalist Danil Usmanov has for weeks been watching his country’s unfolding coronavirus crisis. In this essay, he describes some of his observations. 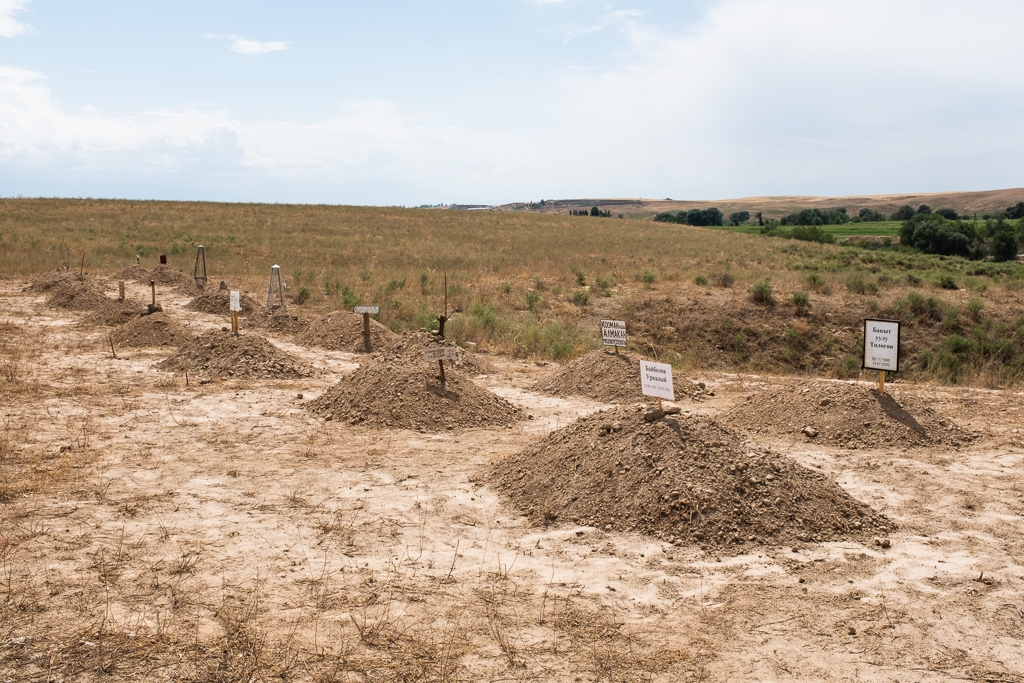 Sitting around at home has been frustrating. It felt important to tell the story about how people are coming together and showing solidarity at a time when the government has failed to keep up. And so that is what pushed me to head out into the streets with my camera.

Early on, the authorities set up drop-in centers, including one at the Sports Palace in Bishkek. On the first day, a lot of people turned up there because the hospitals were filling up. People arrived in a state of panic in the hope of getting some help. It was all a bit disorganized and chaotic at the start. 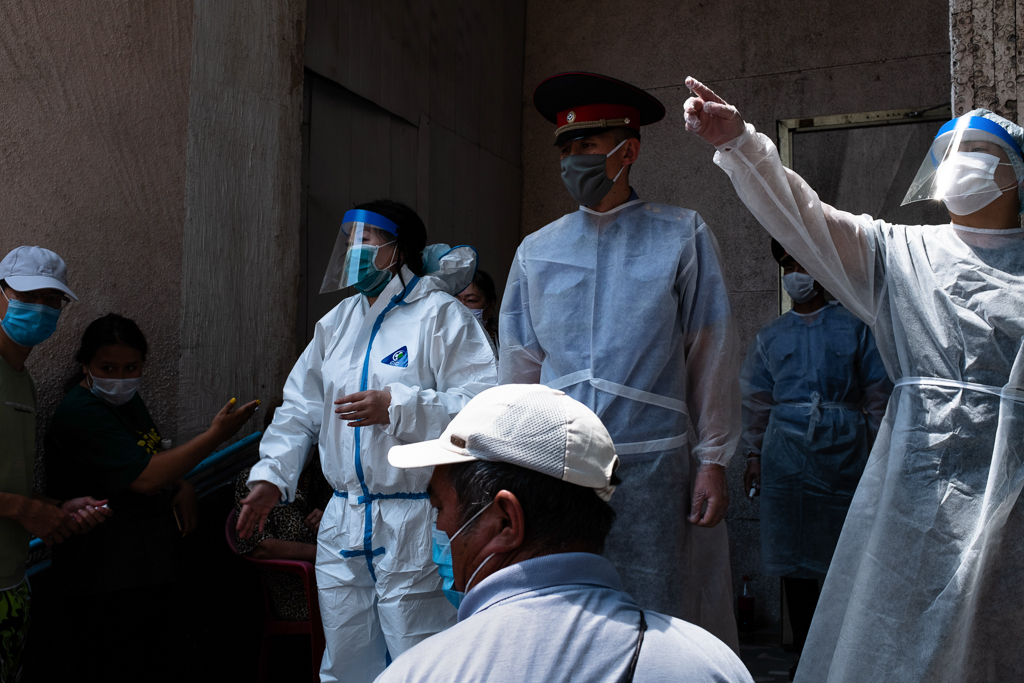 When I was shooting, I would wear a mask and gown, like the medical workers do, although I suspect that I may have been sick already and recovered. I don’t know for certain, because I didn’t have a test, but I felt bad a few weeks back and remained in self-isolation until I was certain that I was in the clear.

People were kind of cagey and wary that I was taking pictures, but most were not too bothered. They had other, more important things, to worry about.

One of the first major high-profile deaths was that of the ex-mufti of Kyrgyzstan, Chubak ajy Jalilov, on July 11. A lot of people came to the morgue and they were sobbing with grief. They were sincere tears of anguish. And you could tell from how quite a few of them were dressed, in protective clothing, that they were starting to take this more seriously. Before then, a lot of people just didn’t seem fazed by coronavirus. 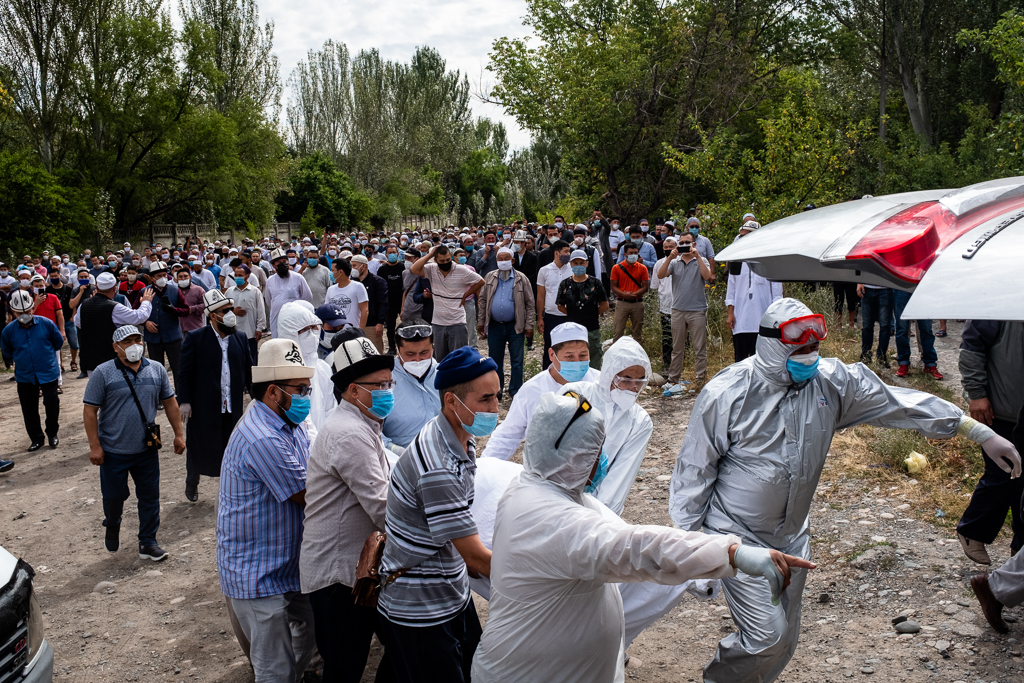 Another time, I visited a medical supplies warehouse, because there was a major rush on any drugs for treating fevers. The mood was sour as the line was disorderly and some had been waiting for two hours. At one point the police were called in to restore calm and force people in line to maintain social distancing. Word went around that some of the hopeful buyers were speculators trying to scoop up supplies of goods to sell on at higher prices, and that just made things even more tense. 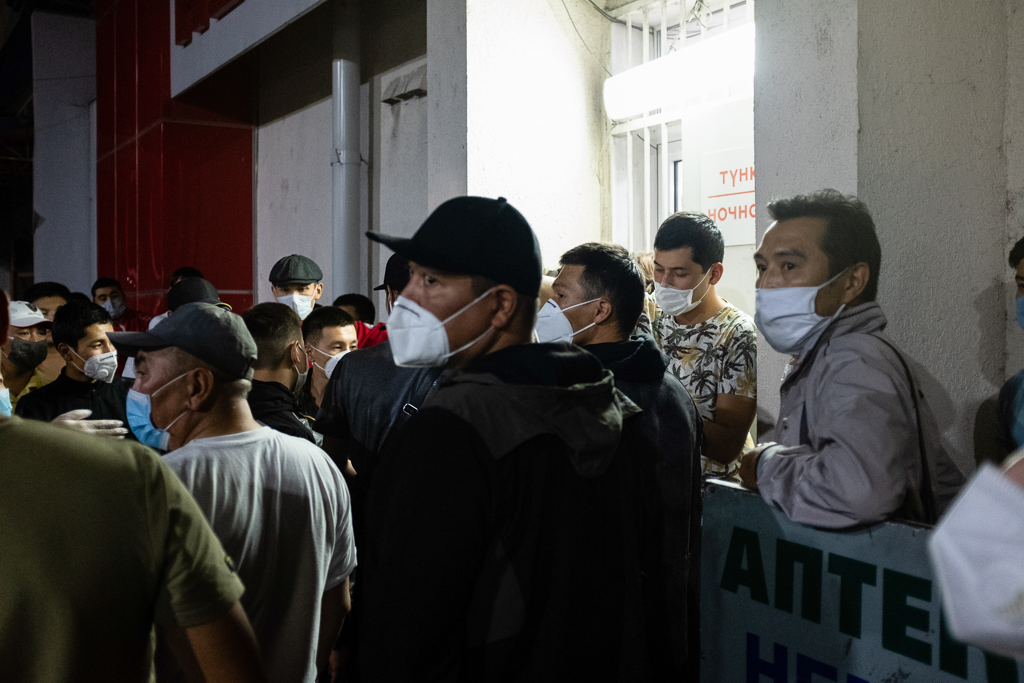 Things have got a bit better now. Drug deliveries have normalized, so you don’t see so many posts on Facebook, like you did before, of people desperately trying to find this or that medicine.

Ambulances services were overwhelmed, so often you just could not get through on the phone. In some cases, relatives of the sick had to drive themselves to emergency health centers. In this photo, you see an elderly lady who was given first aid assistance and is being taken to the hospital by ambulance for further treatment. 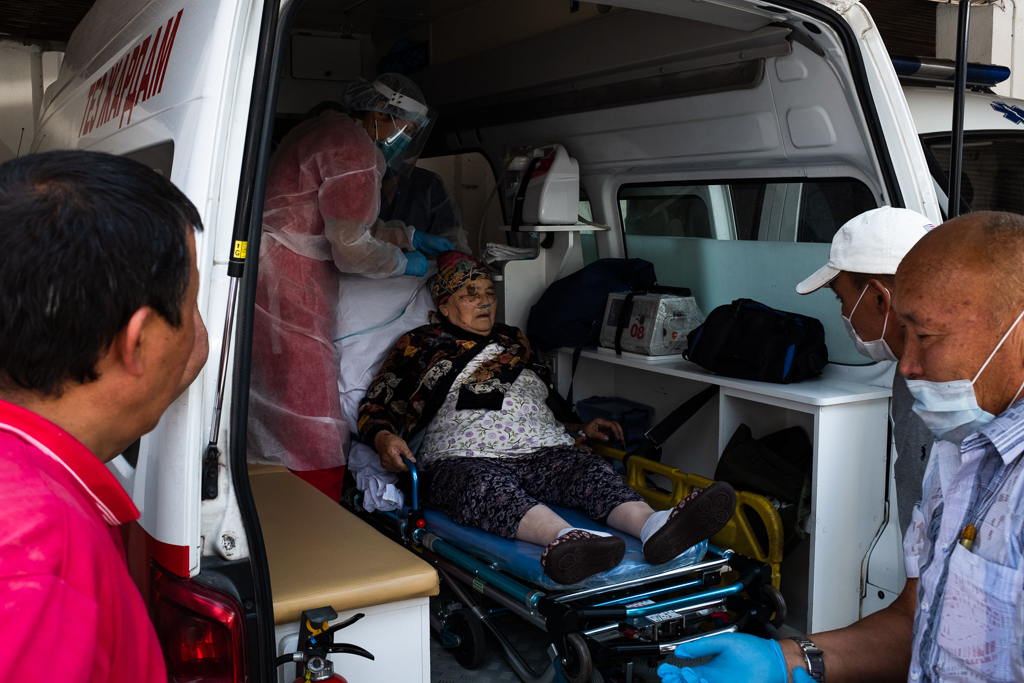 Few places were as crowded as the Sports Palace drop-in center, which was assisting around 1,500 people a day. The idea is that you come, get some advice from a medic, maybe some on-the-spot treatment, and then go back home. The workers there were a combination of doctors and nurses, and then the volunteers, who weren’t trained, so they just helped by carrying stuff and keeping things tidy. 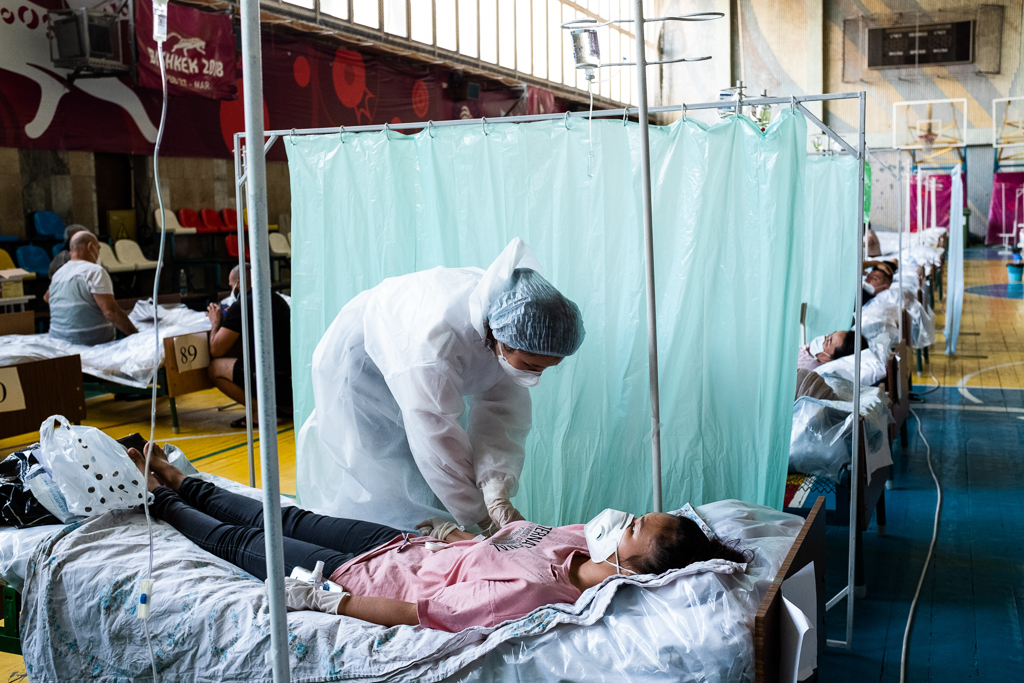 You could tell people were on edge. There was this one lady, she was wearing a mask and kept on spraying her face and the mask itself with disinfectant. If you spray your mask with antiseptic liquid, it just suffocates you. But that’s how nervous people were.

A group of volunteers was going to the homes of the sick to help them out with oxygen concentrators. One morning I heard about the case of an old man who was really struggling. They had wanted to take him to the hospital, but he was turned away – hospital staff said they couldn’t admit him. In the end, the volunteers decided to take the man to a coronavirus triage center set up on the site of the old U.S. air base, by the Manas international airport. On the way to Manas, they used up three emergency oxygen storage pillows to keep him going. 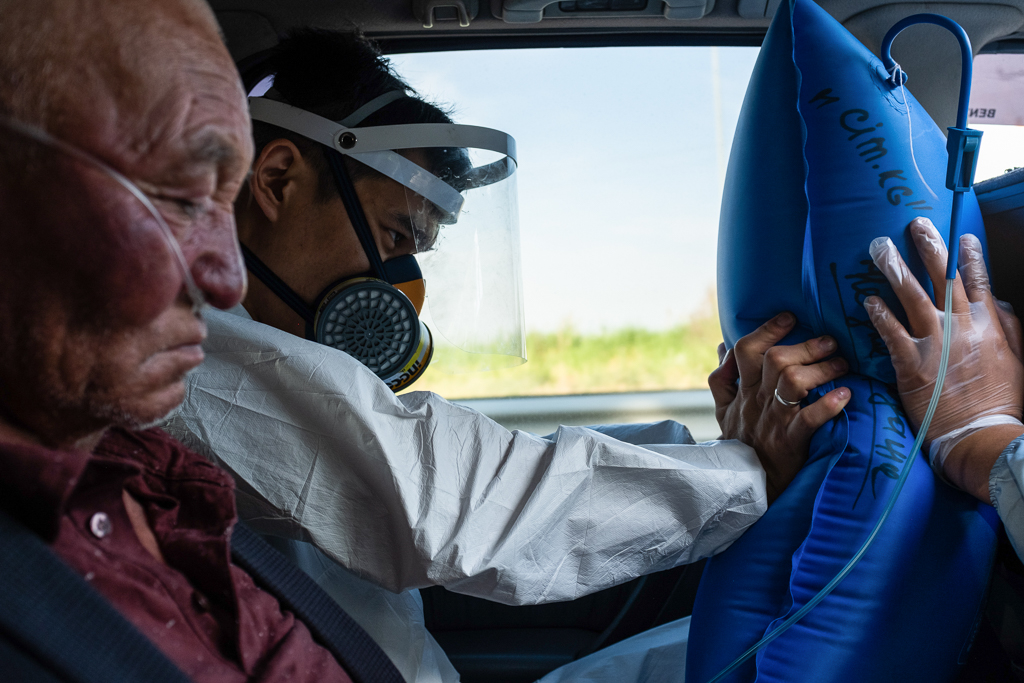 At the Manas facility, patients were kept in sealed twin rooms. Medics could check on the sick through inspection windows. The rooms had bathrooms and air conditions, so patients are pretty comfortable all things considered. Patients are encouraged to go outside for a stroll from time to time, just to keep up their strength. 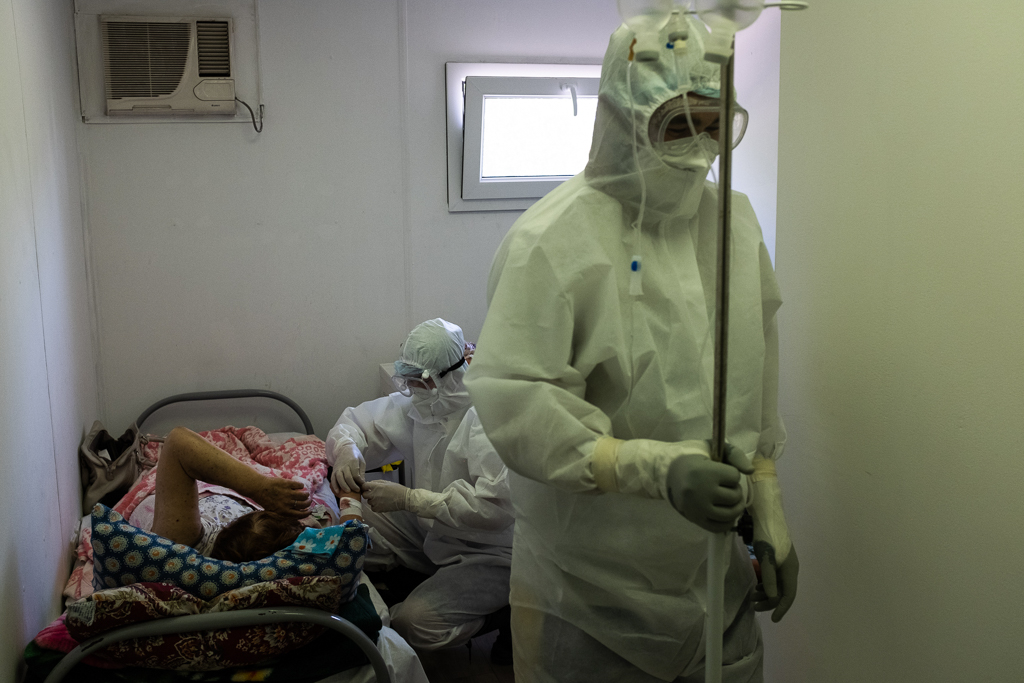 The volunteers work long hours and for days back to back. As well as taking oxygen concentrators to people’s homes, they help carry groceries. At times, they just crash at their improvised HQ and snatch whatever sleep they can. 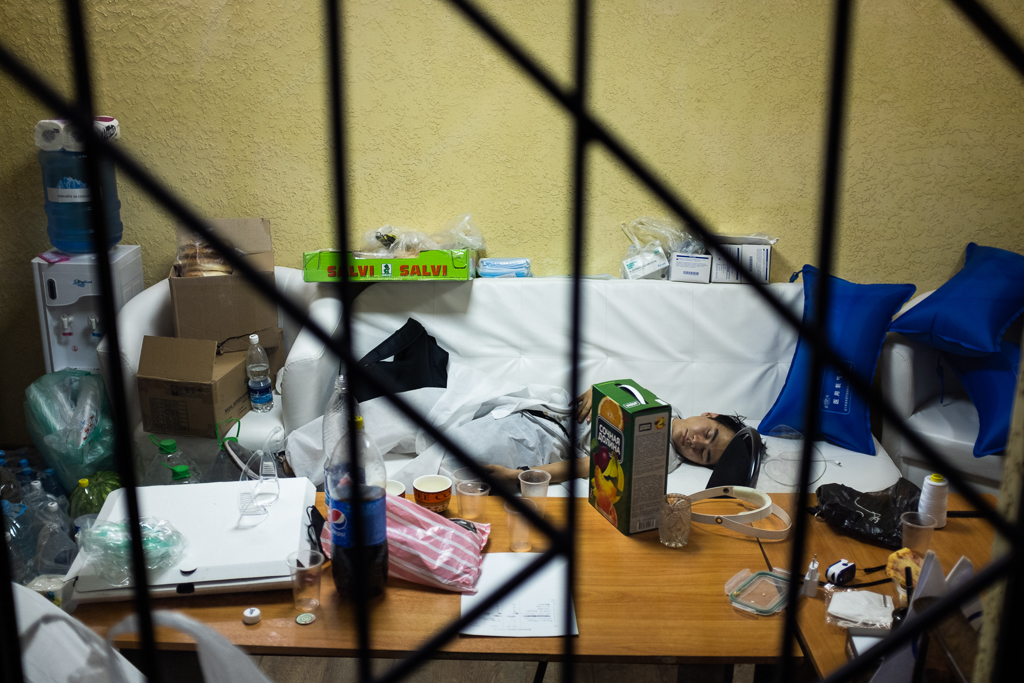 There is one guy who used to be in the National Guard, he stood sentry at the national flag outside the White House government building in the center of Bishkek. He was going through the motions of enrolling with the police, but seeing everything that was going on, he gave that up. “There are lives we need to save,” he told me one time. It was pleasant to be around these volunteers – they come from all walks of life, all different kinds of people working for one cause.

One drop-in facility was set up in a restaurant called Consul, not far from parliament. Usually, it is a place for fancy banquets attended by important officials. The layout is all pseudo-classy, lots of fancy-looking paintings on the walls. Now it is open to the public, day and night, for anybody wanting advice or a medical consultation. It is a pretty surreal sight to see these doctors in gowns and scared, sick people against the backdrop of this tacky luxury. 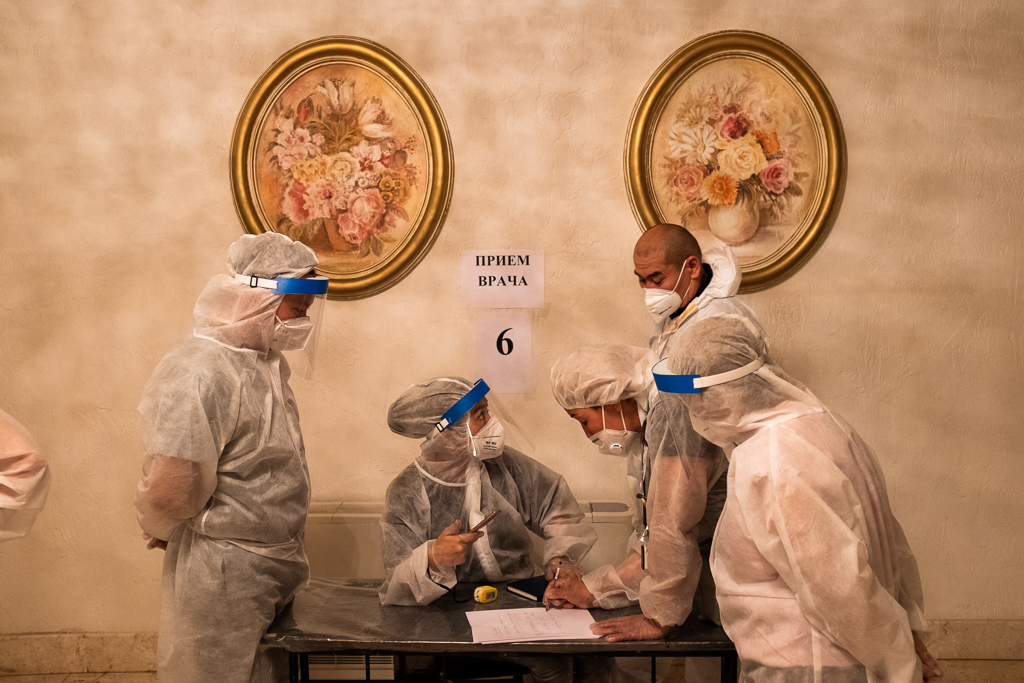 Things have calmed down a little lately. So at the Manas facility, for example, medical workers even have a bit of downtime, which some use to relax or play volleyball in the yard. By the time this photo was taken, only around half the available places were being used. 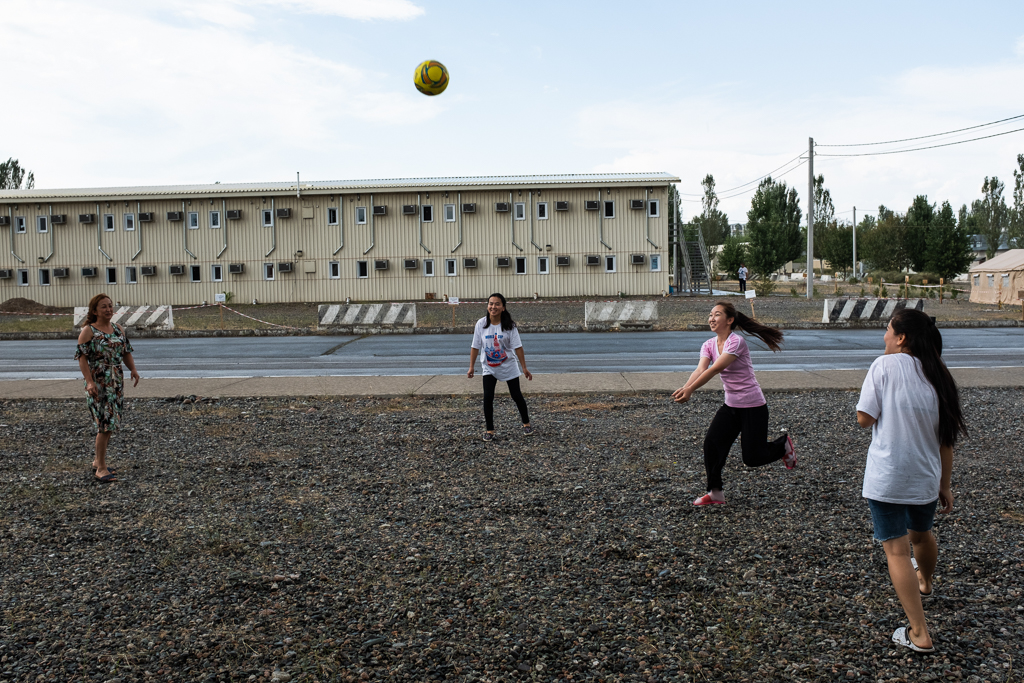 On July 30, Kyrgyzstan marked a national day of mourning for the victims of coronavirus. Toward midnight the night before, I headed out to a vantage point in the hills in the north of Bishkek to watch the huge national flag near the Ala Archa presidential residence being lowered to half-mast.

Groups of young people had gathered at the spot, to drink and sing and party. Nobody seemed aware of the flag being lowered, though. At one point, a guy and a girl had a major bust-up.

Nothing could have been further from their minds than the coronavirus outbreak. Life, for now, is reverting to normality. 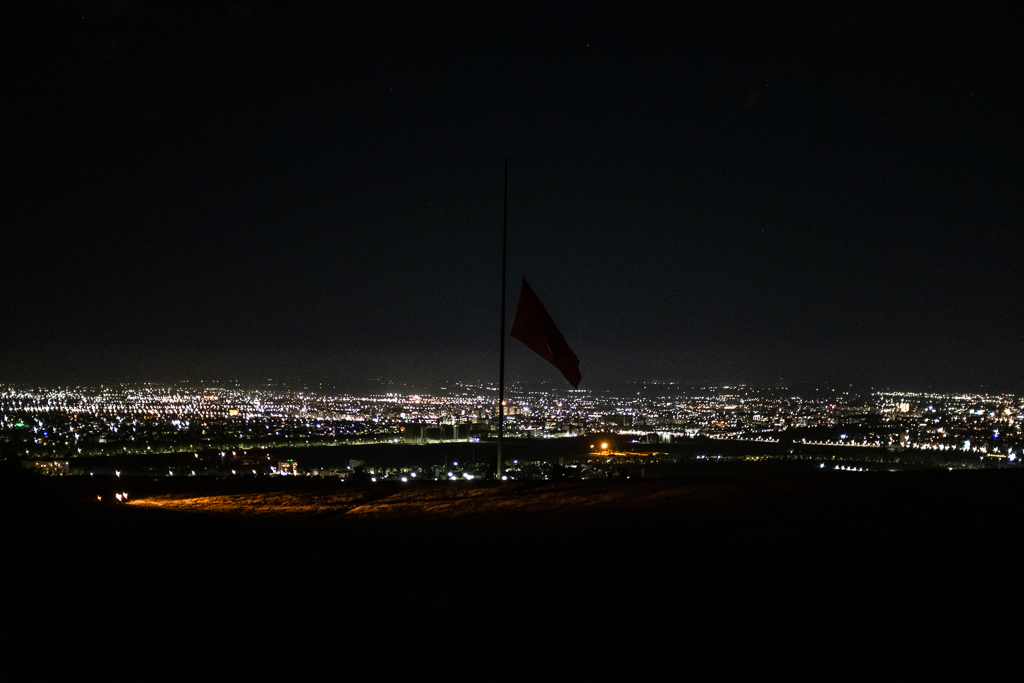