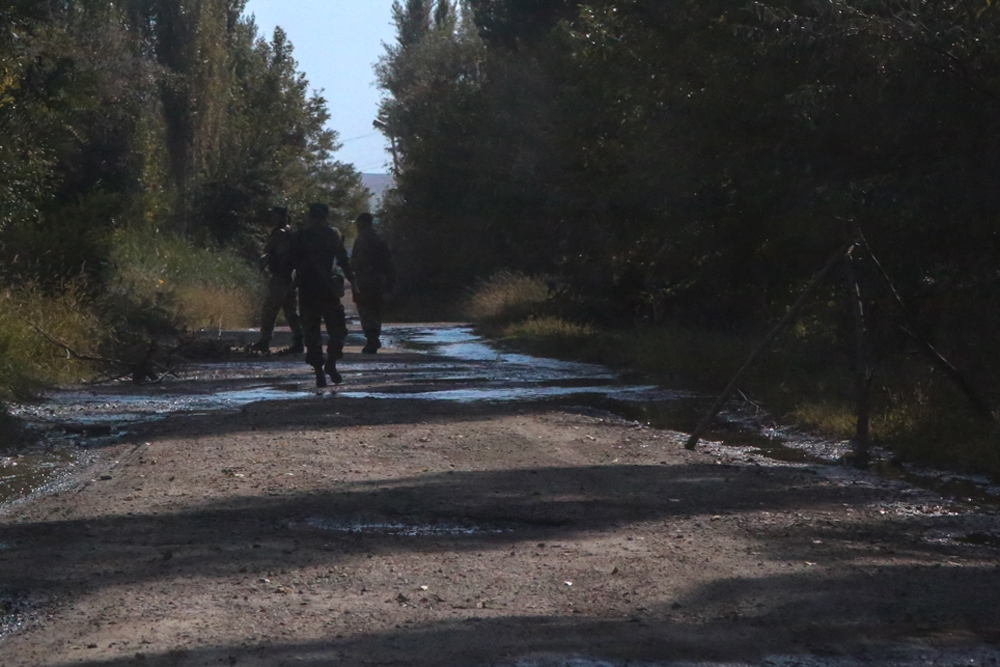 A Kyrgyz post, marked by a pyramid made from tree branches and a camouflage-pattern tent by a brook, guards the dirt track leading to the Kasan-sai reservoir. (Photo: EurasiaNet)

As strangers approached, a trio of soldiers guarding the dirt track leading to the Kasan-sai reservoir emerged warily from the bushes, rifles at the ready.

The soldiers were Kyrgyz, and less than a minute’s walk beyond them was the entrance to a village of Uzbek citizens living near the reservoir.

The Kyrgyz post, marked by a pyramid made from tree branches and a camouflage-pattern tent by a brook, serves the line of contact for one of the region’s most intractable territorial disputes.

Twice this year, Kyrgyzstan and Uzbekistan have gone toe to toe over who should have ownership over the Kasan-sai reservoir, which is claimed by Uzbekistan despite lying several kilometers inside Kyrgyzstan. The latest confrontation culminated in August with Uzbek police seizing a nearby mountaintop Kyrgyz telecommunications tower and detaining four technicians working there.

Local communities in this area of Kyrgyzstan’s Jalal-Abad region bristled with anger at the audacity of the move — an apparent attempt by Tashkent to gain leverage in its campaign to retain ownership over Kasan-sai. “This is Kyrgyz land,” said Satinbay Mamashev, a 74-year old herdsman taking his family’s cattle to pasture on the banks of the reservoir opposite the Uzbek village. “Why don’t they just stick to their own land?”

Standard explanations for these border disputes are rooted in the haphazard way in which the Soviet authorities drew the boundaries between constituent republics. This is only part of the story, though. It is the flowing water, not the firm soil, that truly matters.

When the Soviet Union collapsed, Kyrgyzstan’s government parceled out plots to the farmers that lived and worked on the state farms. But land is hard to master in this mountainous country.

Surveying the Fergana Valley in the Jalal-Abad region from the roads hugging the border with Uzbekistan, it is easy to see that Kyrgyzstan was dealt a poor hand by history and politics. Down in the flat valleys, Uzbek towns and villages teem with crops and endless rows of poplars. Kyrgyz villages cling to the edge of mountains, leaving the rearing of livestock as the only realistic option for many. Ethnic identification was not always a determining factor when drawing up maps. In some instances, Kyrgyz communities ended up in Uzbekistan — other times it was the other way around.

Mamashev tends to 20 cows belonging to him and his children. When Kyrgyzstan gained independence, his family was allocated 800 square meters of irrigated land and another 2,800 square meter plot of rain-fed soil. Mamashev said that the larger plot was used to grow grain for many years, but was eventually rendered useless by years of drought. On paper, pumps and canals could be used to draw water from the reservoir down the road, but that kind of expense is far beyond the means of Mamashev and small farmers like him.

Uzbekistan’s claims over the water coming down from Kyrgyzstan’s peaks compound the frustration.

“Uzbekistan converted so much land for cotton cultivation. In places where they had no water, they pumped it in and took it for themselves. Well, I don’t care about that. Oh, if only I were a rich man,” Mamashev said.

The town of Ala-Buka is a short drive from the reservoir. A faintly decayed and sleepy spot, it bursts into life on Sunday, when the bazaar comes to town. Thousands thread through the tightly packed stalls set up on a slope running off the main thoroughfare.

There is yet more cacophony at a cattle market outside town. Clusters of sheep with runny noses are bound together so tightly that they face one another. A single sheep in good shape can sell for as much as 5,000 som ($70), but that is all subject to negotiation. Cows are a far more expensive proposition and there are far fewer of them for sale. Buyer and seller shake hands as they haggle, never letting go until a price is agreed with a cry of “ber-bereke!” — a term that doesn’t quite lend itself to direct translation but means “we have a deal.”

“In Ala-Buka, people live off livestock,” said Abdyakim Orozov, a retired policeman overseeing the paddock in which the deals are made. “We have no factories or industry, so our livestock are the main thing in our economy.”

The best time to buy sheep and cows is at the start of autumn, which is when the conditions in the countryside are best for fattening the animals. It is a precarious existence. Many rely on loans for the money to buy sheep, goats or cows. The death or disappearance of an animal is a calamity. This is another bone of contention between communities on either side of the border. Kyrgyz herders accuse Uzbeks of occasionally pilfering their animals — and the Uzbek authorities turn a blind eye to such theft, as Kyrgyz herders have it. Despite Tashkent’s intense paranoia over securing its border, some sections are marked only by shallow ditches.

“If the cattle run over to that side, we never get them back. That’s why we keep a close eye on them,” Orozov said.

For all these local grievances, along the border, Kyrgyzstan and Uzbekistan rub alongside uncertainly, but relatively peaceably. That is until armed forces get involved.

In a gesture guaranteed to raise hackles in Uzbekistan, Kyrgyzstan’s government in November adopted a decree transferring the Kasan-sai reservoir onto the state’s books. Tashkent insists that since it built the reservoir with its money and resources during the Soviet era, it should get to keep it now. With that decree in hand, Bishkek dispatched forces to Kasan-sai to secure the site. When Uzbekistan asked for its technicians to be given permission to access the reservoir and dam, Kyrgyzstan reportedly refused.

And so in March, dozens of Uzbek troops were deployed to the road leading to Ala-Buka. That road was built to circumvent a spur of Uzbekistan jutting into Kyrgyzstan, but Tashkent was now arguing this section too was theirs. The claim was specious, but all the same, Uzbek soldiers threw up checkpoints, forcing motorists driving between the Ala-Buka district and the rest of the country to submit to document checks. Kyrgyz forces dispatched their own armored vehicles to the same area in response.

Then-Kyrgyz prime minister Temir Sariyev was sufficiently spooked by anger among communities along the border that he traveled to the area in person to soothe tempers. Uzbeks at the Kasan-sai reservoir have in years past reported being intimidated by mobs of angry young Kyrgyz men looking for trouble.

On March 19, the day before Sariyev arrived in Ala-Buka, a crowd of people mustered on the local football field to discuss what they would tell the prime minister. A petition was drawn up calling on the government in Bishkek to lay down the law to Tashkent.

“There was a petition in my hand signed by 300 people to demand an ultimatum to do [something] within three or four days or they, the people, would take the problems into their own hands,” local entrepreneur Almaz Tashanov, who helped draft the petition, told EurasiaNet.org, speaking in English.

Tashanov was one of a small group of Ala-Buka representatives admitted to see Sariyev and the top security officials accompanying him.

“They were nervous about the situation and asked us to calm down the moods of the crowd,” Tashanov said.

Sariyev promised action. After a week of negotiations, the Uzbek government withdrew its troops.

That bought a few more months of calm before another incident. As usual, there are dueling accounts about what sparked the latest escalation.

Anonymous Uzbek officials told Russian news website Sputnik that Kyrgyz special forces tried to force their way into the Kasan-sai reservoir on August 13 in a confrontation that ended with one Uzbek policeman being detained. Local authorities refute this story. Less than 10 days later, an Uzbek helicopter loaded with policeman landed on the nearby Ungar-Too mountain, where Kyrgyzstan maintains a valuable telecommunications tower. On September 18, Uzbek police pulled out from the mountaintop, again averting the potential for uncontrolled consequences.

Since March, Kyrgyz troops have been stationed around the Kasan-sai reservoir. Some are on the road leading into the grounds. Another larger group, equipped with an armored personnel vehicle mounted with an antiaircraft gun, is on a bluff overlooking the reservoir. It is not altogether clear whom they are protecting.

An officer with the State Committee for National Security, or GKNB, stationed in Ala-Buka told EurasiaNet.org that the troops were there to prevent “provocations” — in other words, to stop local people from trying to mount an improvised raid on Kasan-sai. As well as protecting Kasan-sai, however, the Kyrgyz troops are to all intents and purposes holding the people living there hostage.

While no officials have put it quite so explicitly, the terms of the latest standoff were clear enough. If Kyrgyzstan wants long-term, unhindered access to the Ungar-Too tower, it must agree to grant Uzbekistan de facto control over Kasan-sai and give Uzbek technicians free and unfettered access. That arrangement would enrage many in Ala-Buka, who view river waters as nothing less than a birthright given away cheaply. And foreign diplomats worry this would formalize the appearance of yet another Fergana enclave, creating another potential flashpoint of future unrest.

Although Uzbekistan is far better equipped on the military front, it has been outplayed by Kyrgyzstan on strategy. Historically, Tashkent in earlier disputes had leverage over Bishkek, namely it could withhold deliveries of electricity and natural gas to Kyrgyz customers. But this is no longer the case, as people in Ala-Buka like to point out with pride.

In 2015, Kyrgyzstan unveiled the Datka-Kemin high-voltage power line linking the south and north. Built with Chinese loans, the line pulled Kyrgyzstan out of the Soviet-designed Central Asian power grid that had left it at the mercy of its neighbors.

This change in fortunes has given people in Kyrgyzstan a sense that the tables have been turned.

“We will not give them [Kasan-sai]. That is a very important and strategic site,” said Orozov, the former policeman running the cattle market. “Let them beg us. If they want water, they can buy it.”