'We Want a Voice': Women Fight for Their Rights in the Former USSR 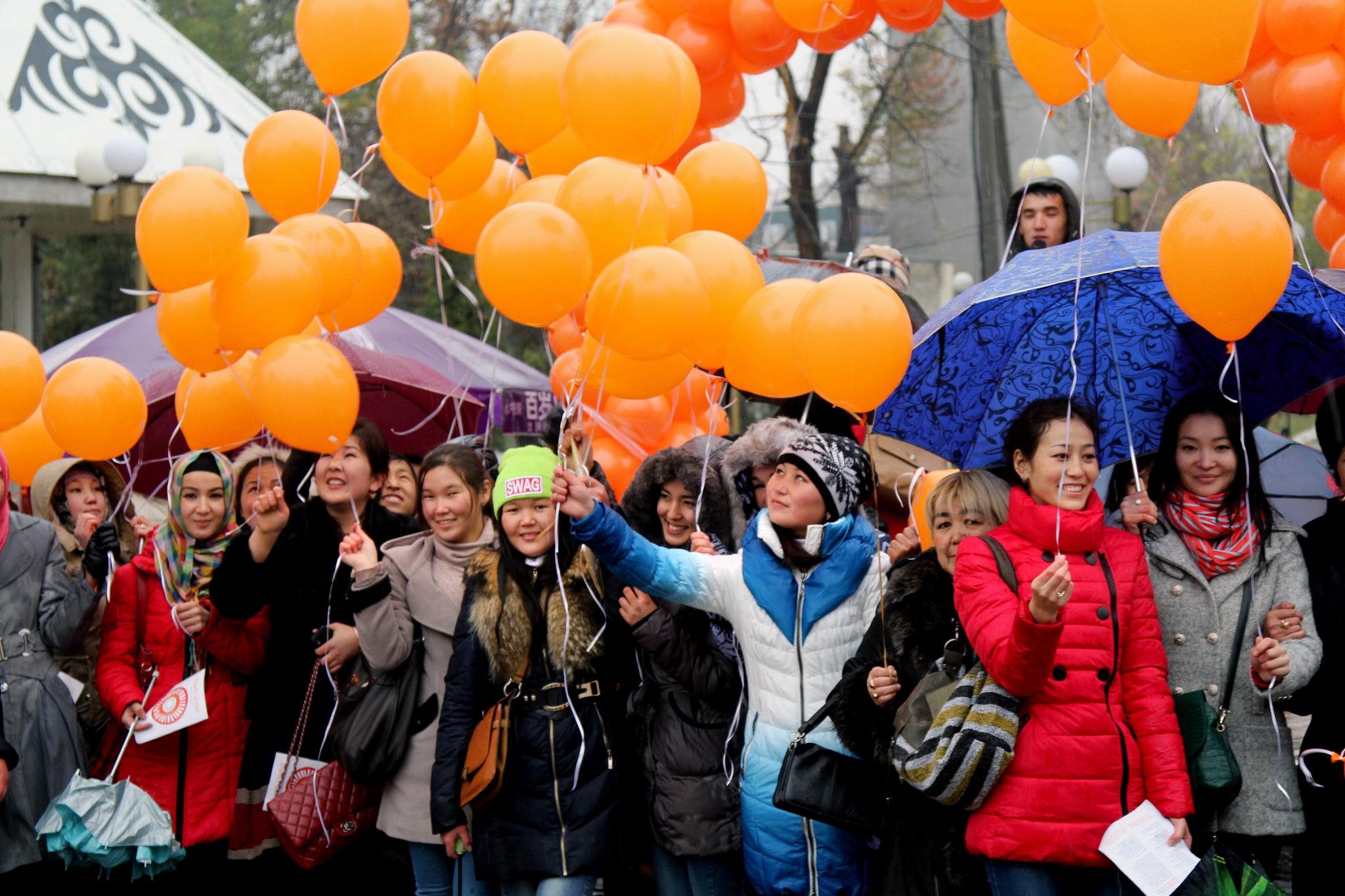 Women gather at an event organized by UN Women Kyrgyzstan as part of a campaign against gender violence. (Photo: UN Women/Meder Sadyraliev)

Women had stood shoulder to shoulder with men in the Russian Revolution of 1917, according to its leader Vladimir Lenin, and were said to be at the vanguard of the drive to build an equal society in the world’s first communist state; the Union of Soviet Socialist Republics (USSR).

From Moscow in European Russia to Tashkent in central Asia, Soviet leaders embarked with revolutionary zeal on a mission to liberate downtrodden women – and by 1930, Joseph Stalin, Lenin’s successor in the Kremlin, declared the job done.

Moscow had enshrined equal rights in law, and given women of the Soviet state more power over their reproductive rights with the legalisation of abortion in 1920 (though it was banned again for two decades from 1936). It coaxed – or herded – women into the workplace, providing universal child care and generous maternity benefits to oil the wheels of the socialist machine.

Yet despite these apparent freedoms, for the average Soviet woman emancipation meant a life of drudgery; bearing the “double burden” of home-making and child-rearing alongside work outside the home was all the more onerous in a country beset by rampant shortages and widespread abuses.

Today, almost 25 years after the fall of the USSR, many problems faced by women across the post-Soviet states have a familiar ring in the west. Though each country has formally expressed its commitment to equal rights, campaigners say they face a particularly tough job in many of the conservative, patriarchal societies that dominate the region, especially in those countries where the Kremlin’s family values agenda holds sway.

Latvia, where women make up 55% of the population, comes out top for women’s rights in the 13 post-Soviet countries that are included in the World Economic Forum’s 2014 Global Gender Gap report, though - like much of the rest of the world - it still struggles with a significant gender pay gap.

On the other end of the spectrum, Turkmenistan and Uzbekistan, the two post-Soviet states not ranked in the report, are seen as two of the world’s most repressive countries. In the region’s most socially conservative countries – mainly in central Asia and the Caucasus – women confront a host of abusive practices which are difficult to root out, from bride kidnapping to denials of their reproductive rights.

In Kyrgyzstan, which ranks 67th in the gender report, bride kidnapping – never fully stamped out in the USSR – is back with a vengeance. Studies show that some 11,800 women are kidnapped every year, and up to a fifth are subjected to violence, including rape. The government acknowledges bride snatching as a problem and is cracking down, adopting new legislation which more than tripled the maximum sentence to 10 years – but prosecutions remain a rarity.

Meanwhile, women in neighbouring Uzbekistan are reportedly falling victim to a secret government-sponsored campaign of forced sterilisation to control an exploding population – though the government denies any such campaign exists.

Across central Asia and the Caucasus young brides are subjected to humiliating virginity rituals, with bloodied bed sheets brandished as evidence and expulsion from their new home as the penalty for those who fail the test.

“The stigma is attached to the woman – it’s not the groom who’s driven out of the home if there’s no blood,” says Umida Ahmedova, an Uzbek film-maker who produced a harrowing documentary on this practice in 2010. She was prosecuted for her pains, and found guilty of “slandering the Uzbek nation”.

Economic insecurity is also taking its toll, pushing women into becoming “second wives” in countries like Kyrgyzstan, Kazakhstan and Tajikistan, where some are married by imams who recognise polygamy under Islamic law – but have no legal rights in a state which does not.

In Russia, where Kremlin views still have considerable influence for many countries in the region, President Vladimir Putin revels in a cult of masculinity. The alpha-male president pulls off macho PR stunts, from bare-chested horse-riding to rescuing a TV crew from a staged tiger attack. For some, this manly version of Russian power comes at a cost for the country’s women.

“With Putin, it’s not just about the masculinity of his persona, it’s a conflation of Putin’s strength and Russia’s strength,” says Professor Valerie Sperling of Clark University in the US, author of Sex, Politics, and Putin: Political Legitimacy in Russia.

Domestic violence is not recognised as a crime in Russia, leaving victims and the police with little recourse even as thousands of women die each year at the hands of violent partners. Fighting domestic abuse is an uphill struggle even in former Soviet states which have adopted laws against it, like Georgia, where “alarming and intolerant opinions” prevail in a blame-the-victim culture, the Tbilisi-based Human Rights Centre says.

Sperling says feminism has become “a dirty word” in Russia and any challenge to Putin’s macho image is crushed. Witness Pussy Riot, the anarcho-feminist punk group whose irreverent performance in Moscow’s main cathedral in 2012 landed performers behind bars – and sparked what Sperling calls “anti-feminist hysteria” in Russia. The judge cited Pussy Riot’s feminist beliefs as tantamount to promoting religious hatred, and the influential Russian Orthodox Patriarch Kirill later gave his verdict on feminism: “a very dangerous phenomenon” promulgating the “pseudo-freedom of women” outside marriage and the family.

Moscow exerts powerful cultural sway over its former colonies, and the Kremlin’s anti-western, family-values agenda chimes with conservative social attitudes already prevalent in the region. For Moscow, foreign policy is often a zero-sum game: its former colonies are either with it or against it, and that means falling in with Russian pressure to resist “western values”. The Kremlin’s hostility towards gay rights often makes headlines – but women’s rights are also at the sharp end of this culture war.

Two countries in the Caucasus - western-friendly Georgia and neighbouring Armenia (which embraced Russia in a foreign policy U-turn last year) - present a striking contrast. Women’s rights are rising up the agenda in Georgia, says the Tbilisi-based Human Rights Centre, and “we think one of the reasons is Georgia’s pro-western policy and European aspiration.”

Meanwhile, campaigners in Yerevan like Lara Aharonian, director of the Women’s Resource Centre Armenia, have faced death threats amid a smear campaign painting gender equality as a western ruse to destroy the family – a potent message in societies which hold the family sacred.

“Today it’s very difficult to use the word ‘gender’ in Armenia,” says Aharonian. “It means an insult.”

In Kyrgyzstan, campaigners are “threatened, they’re attacked, they’re dehumanised, they’re demonised,” says a Bishkek-based activist speaking anonymously for fear of reprisals. “We can feel this backlash with our bodies. That’s how strong it is.”

Despite the many challenges, and sometimes dangers, women across the region maintain small but strong feminist campaigns. “We are part of society and we want to have a voice!” is the rallying cry of Girl Activists of Kyrgyzstan, a group fighting to change mind-sets “in a society where early marriage is a great success in life… where violence is normal… where education [for girls] takes a backseat… where boys are placed a step above us… where people don’t want to listen to us.”

In Ukraine – the country on the bloody frontline of what has turned into a cultural tug of war between Russia and the west – an anarcho-feminist group forced to flee amid a civil rights crackdown has returned since the revolution that installed a pro-western government in February last year. Femen marked the anniversary of the start of the uprising in November with a topless protest in which activists splashed slogans like “death to dictatorship” across their breasts. “The breast is chosen as a weapon, in a bid to reclaim the female body, says co-founder Anna Hutsoi. “The resistance of the patriarchy shows we’re on the right track.”

Nearly a century ago, Lenin confidently proclaimed: “The first proletarian dictatorship is truly paving the way for the complete social equality of women.” Yet in today’s environment, far from the days of Lenin, there is plainly still a long way to go.