Bread-and-butter issues, more than allegiance to an opposition leader, are tying protesters together. 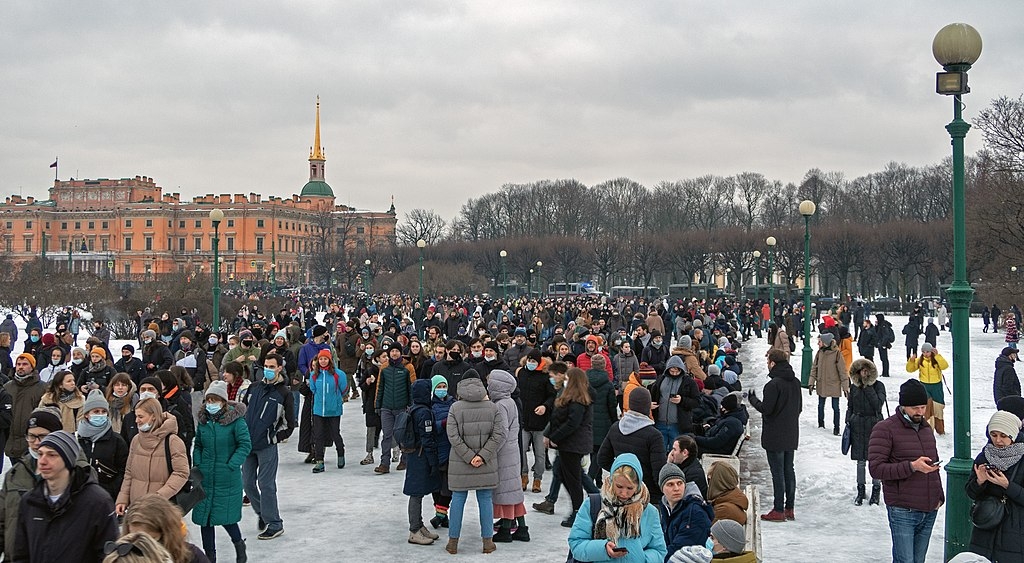 A protest in support of Navalny last month in St. Petersburg (Bestalex/Wikimedia)

Recent weeks have shown that the economic anxiety felt by many Russians is starting to outweigh their fear of repression. This shift is enabling anti-corruption activist Alexei Navalny to galvanize support for a mass movement that is posing the most serious challenge to the Kremlin in a decade.

The simmering anger over the steady erosion of quality-of-life standards raises the chances that the protest mood will endure even with Navalny behind bars.

By many accounts, the protests have already brought together disparate segments of Russian society, including educated urbanites, the rural poor, old-school believers in communism and progressive democrats. Discontent with Russia’s economic direction is the common thread that ties the movement together.

In a speech during a court hearing on February 2, after which he was sent to prison for a parole violation, Navalny highlighted the significance of the country’s economic problems in mobilizing Russians.

“We’ve got 20 million people living below the poverty line. We have tens of millions of people living without the slightest prospects for the future,” he stated. “Life is bearable in Moscow but travel 100 kilometers in any direction and everything’s a mess.”

“The only thing growing in [Russia] is the number of billionaires. Everything else is declining,” Navalny continued, assailing Kremlin leaders. “I’m locked up in a prison cell and all I hear about on TV is that butter is getting more expensive. The price of eggs is rising. You’ve deprived these people of a future.”

Official statistics generally seem to support Navalny’s assertions. Yet they also appear to significantly underestimate the severity of the hardships.

It’s much the same story with unemployment. Rosstat fixed the unemployment rate in December 2020 at 5.9 percent. While that is highest rate recorded in several years, it still marked only a 1 percent increase from the start of 2020, a year in which COVID-19 caused massive economic disruption across the globe.

Other Rosstat data would seem to call its unemployment figure into question. Corporate earnings, for instance, fell by 31.9 percent year-on-year during the first 11 months of 2020; almost one-third of enterprises had a negative balance sheet during the same period. (December totals have not yet been released).

Data compiled by the Federal Tax Service also undermines faith in the accuracy of official unemployment figures. A report compiled by Moscow-based Center for Macroeconomic Analysis and Short-Term Forecasting, which styles itself as an independent non-profit research organization, found that entrepreneurship flagged in 2020. For example, there were just over 243,000 new legal entities registered in 2020, including for-profit and non-profit employers – more than a 24 percent drop over the previous year.

For Russian businesses that survived the COVID downturn, over two-thirds of executives responding to a November survey published by Rabota, a HR consultancy, described 2020 as “the worst” or “among the worst” years they had experienced. Almost half the corporate respondents said the toughest challenge they faced during the year was either laying off employees or cutting wages.

Even if the economy rebounds and employment figures improve in 2021, steep inflation is likely to persist. Central Bank statistics show the country’s money supply (the total amount of rubles – cash and non-cash – in circulation) in Russia increased by 13.5 percent in 2020, and by 21.5 percent since October 2019.

Survey data lends credence to the idea that economic dissatisfaction is driving people into the streets. Irina Kozlova, a sociologist in St. Petersburg, told Eurasianet that preliminary results of a survey she concluded in early February showed that almost half of the 400 respondents had joined a public protest for the first or second time within the past year. Young people are a large element of the new protesters, she found, adding that most respondents indicated they were turning out more to express concern about their own futures, rather than out of any loyalty to Navalny’s agenda.

“I have a feeling that the degree of indignation is growing,” Kozlova said in assessing her findings. “There is growing irritation that, as young people say, there is no opportunity to gain a sense of self-fulfillment, to find a decent job. […] The inability to live a normal life, including in an economic sense, is oppressing and irritating people.”

The government has embraced Soviet-style tactics in its initial response to the social and economic challenges underlying the recent protests – imposing price controls on essential foods while ratcheting up arrests. Such an approach could exacerbate tensions. The Soviet experience showed that price controls resulted in empty store shelves and the proliferation of a black market.

Meanwhile, the latest round of protests proved resistant to intimidation. Besides sending Navalny to prison for an estimated two-and-a-half years on a technicality, authorities arrested unprecedented numbers of protesters and journalists.

Navalny during his courtroom address predicted that the government’s reliance on fear and intimidation would ultimately backfire.

“This isn’t a demonstration of strength – it’s a show of weakness,” Navalny said. “I hope very much that people will realize this. And they will. Because you can’t lock up the whole country.”

With Navalny’s ability to relay his messages and stoke public frustration likely to be curtailed for the foreseeable future, it’s hard to predict how his movement will play out. His lieutenants have suspended calls for street protests for now. But economic reality and anecdotal evidence both suggest the protest mood will endure.

Kirill Medvedev, a writer and musician in Moscow, said the 2021 protests have had a different feel from earlier public displays of dissatisfaction, including the mass rallies at Bolotnaya Square in 2011.

“The difference between the previous waves of protests that catches the eye is not quantitative,” Medvedev told Eurasianet. “For one, people from more diverse backgrounds are involved in the [recent] protests. When you’re on a Moscow bus, you can’t help but hear someone nearby talking about Navalny, Putin's palace, participation in rallies and so on.”

“At the end of 2011, my apolitical friends suddenly started talking about politics,” he added. “It was a serious development at that time. But I don't remember feeling that the whole city is talking about it. Now it is.”