What Did Tajikistan's ISIS Colonel Learn From His American Training? 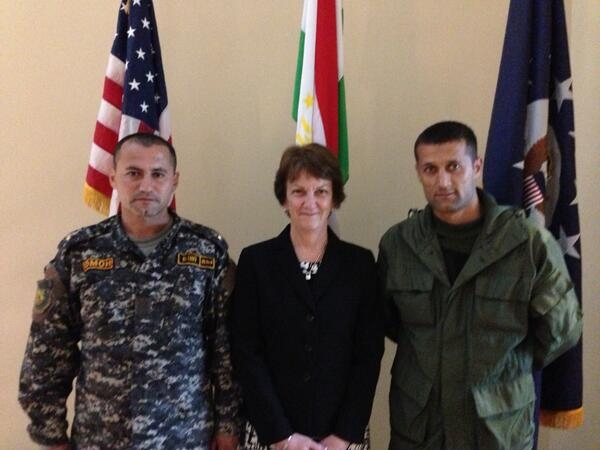 Colonel Gulmurod Khalimov, the head of the Ministry of Interior special forces OMON units, claimed in his ISIS promotional video that he gone to the U.S. three times for counterterrorism training, including with American mercenary firm Blackwater. "Listen, you American pigs: I've been to America three times. I saw how you train soldiers to kill Muslims," he said. "You taught your soldiers how to surround and attack, in order to exterminate Islam and Muslims."

That claim was confirmed by the State Department on May 30. "From 2003-2014 Colonel Khalimov participated in five counterterrorism training courses in the United States and in Tajikistan, through the Department of State's Diplomatic Security/Anti-Terrorism Assistance program," spokeswoman Pooja Jhunjhunwala told CNN.

OMON has been one of the key elements of U.S. security cooperation in Tajikistan, which has focused on training and equipping the country's various special forces units. That training has been controversial, even before there was any ISIS connection: while the special forces are Tajikistan's most capable units and would be used to combat genuine security threats, they also are a key element of President Emomali Rahmon's repressive rule and have been implicated in indiscriminate force in suppressing internal opposition.

In 2012, Tajikistan's leading opposition figure, Muhiddin Kabiri, told The Bug Pit: "I was recently in the airport in Istanbul and met 15-20 of our OMON troops who were returning from training in the U.S. I asked them about this training, and they said it was very good. I hope they will learn not only new military approaches but about human rights, how to protect people, how to protect human rights, the role of these kind of units in a democratic country. In our old Soviet system, the human has no place in this system. I hope when they have this training with the U.S. they will learn another approach, how to protect human rights, protect the country, not just one person. But I'm not sure if this has happened or not."

What was in these courses that OMON officers like Khalimov took? It's not clear which courses Khalimov himself took part in, but thanks to Wikileaked diplomatic cables and other sources we have some indication of what U.S. special forces soldiers taught their OMON counterparts.

In a 2009 diplomatic cable, the U.S. embassy in Dushanbe wrote: "We undertook a number of training events [in 2008] in which the units successfully demonstrated the benefits of training in later operations...We developed counterterrorism capacity within the Ministry of Internal Affairs OMON unit used for SWAT and other emergency response operations. The MVD's elite Militia Detachment for Special Purposes (OMON) drill at the Embassy demonstrated an improved anti-terrorist response."

In briefing slides, the U.S. embassy also has reported that it supplied "Equipment and weaponry for OMON," though it's not clear what weaponry that might have been. OMON played a special role for the U.S., providing protection for the American embassy in Dushanbe. In 2013, U.S. Ambassador Susan Elliott tweeted a photo of herself with two OMON officers, adding: "Thanks to OMON for their support to keep our Embassy safe and secure."

So what does this mean given Khalimov's defection to ISIS? Probably not much in operational terms, and may actually damage U.S. interests less than the U.S.'s longtime support for Tajikistan's repressive state apparatus, writes John Heathershaw, a political scientist who studies Islamic militancy in Tajikistan:

By providing considerable military training to Tajikistan’s security services during the regime’s crackdown on the Islamic Revival Party [Kabiri's party] and all unofficial public expressions of piety, the US Government has associated its counterterrorism efforts with this campaign.... [S]uch military assistance is likely to be counter-productive and should be stopped.

Despite Halimov’s testimony, it is unlikely that his claimed motivation [dissillusionment with Dushanbe's repression of Islam] was the overwhelming cause of his defection. ‘Blowback’ does not refer to this kind of direct process but rather the counter-productive effect of fighting foreign wars via proxies, when an apparent ally turns his guns on his supposed friends. Halimov has now [become] the poster child for the folly of US military assistance in Central Asia.

In another must-read commentary on the Khalimov affair (translated into English here), Russian Central Asia expert Arkady Dubnov writes that the importance of Khalimov's references to the U.S. have been exaggerated, and noted that his threats to Russia were probably more significant:

It's understandable that propaganda produced by ISIS can't do without a threat against the U.S. in particular and Western democracy in general. It's much more telling that in the video for the first time Russia is so openly and sharply blamed and that Tajik "brothers" working there should stop being "servants" of the Russians, and instead only "servants of Allah." Colonel Khalimov called on his brothers to make a hijra [migration] to ISIS and start a jihad.

The former Tajik colonel, playing with his rifle against the background of a curved knife glistening in someone's hands, addressed unbelievers, vowing to "return with these weapons to your cities,' to "kill you." From the context it's clear -- in Russian and American cities. And so we discover an unexpected argument in favor of cooperation between Moscow and Washington in the fight against ISIS...

Russia has, to a greater degree than the U.S., been ginning up the threat of ISIS in Central Asia. And there is a widespread belief in Russia that ISIS is somehow the creation of the U.S. (though this doesn't seem to have been publicly expressed by Russian officials). This affair will certainly do a lot to add fuel to those conspiracy theories. While Khalimov also had been trained by Russia, the emphasis he makes on the U.S. could bolster the belief in Moscow that Washington is an untrustworthy partner in the counterterror fight in Central Asia.

And it will also be interesting to see how this episode affects U.S. military policy in Central Asia. On the one hand, for those inclined to see a danger of Islamist militancy, it provides clear evidence of the threat. But on the other, if U.S. policymakers have been unmoved by their proxies committing human rights violations in remote corners of Tajikistan, a defection to ISIS makes a much more vivid statement about the risks of training repressive security forces.