What Does Adding India And Pakistan Mean For The SCO? 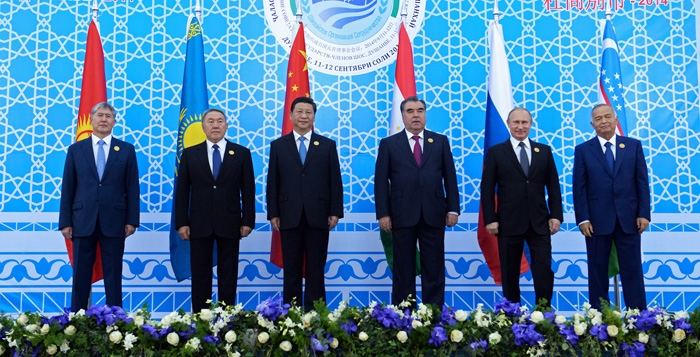 A group photo of the presidents of the six SCO member states, at the 2014 summit in Dushanbe. Will the 2015 photo have two more presidents? (photo: SCO)

After last month's summit in Dushanbe, the Shanghai Cooperation Organization appears poised to finally expand its membership after years of discussion and speculation. SCO members signed protocols for admitting new members, and various officials from member countries have signaled that India and Pakistan will be invited to join at next year's summit in Ufa, Russia.

This would be a watershed move for the organization, which has captured the geopolitical imagination of many around the world who see it as a growing counterweight to Western dominance. That mystique has grown in spite (or perhaps because) of the fact that the group has thus far been more about talk than action.

The SCO is now dominated by two powers, Russia and China, and also includes the Central Asian republics Kazakhstan, Kyrgyzstan, Tajikistan, and Uzbekistan. Those were the original six members when the group was founded in 2001, and despite many entreaties to join -- in particular by India, Pakistan, and Iran -- the group has never expanded. So why is it doing so now? And will expansion add to the group's clout, or dilute its ability to act?

Russia's interest in SCO expansion is relatively obvious: in the wake of the collapse of its relations with the West, the Kremlin is eager to make it appear as if it has plenty of friends around the world and so doesn't need Europe or the U.S. That's resulted in a renewed enthusiasm in Moscow for the SCO; Russia had previously mistrusted the group as being a possible stalking horse for Chinese expansion into what it considers its own strategic backyard, Central Asia.

But China's motivations are less clear, as Beijing isn't as desperate for affirmation and adding India and Pakistan runs the risk of watering down China's ability to use the group to its own ends in Central Asia. (What few concrete achievements the SCO can claim have generally been to promote Beijing's interests in Central Asia, for example investing in infrastructure or gaining help cracking down on Uyghur political groups.)

Expansion "will testify to the rest of the world that the SCO is a truly open and equal platform for safeguarding regional peace and development, not an exclusive and ambitious China-led 'military alliance' as portrayed by some Western powers," wrote Xinhua in a commentary.

In acquiescing to expansion Beijing may just be trying to avoid conflict with all the other parties involved, suggested Raffaello Pantucci, an expert on China-Central Asia relations at the Royal United Services Institute. "It seems clear that the idea of new membership was something that was being advanced by Russia within the organization, though I am equally sure the outside players wanted to get in as much as the Russians wanted them in," he told The Bug Pit. "China dislikes confrontation - especially with countries that it sees as tight allies (Pakistan) or is trying to actively court (India)."

China's interest in India and Pakistan has increased since adopting its New Maritime Silk Road strategy and that could be behind its acquiescence to their joining the SCO, added Li Lifan, a researcher at the Shanghai Academy of Social Sciences. "I think China supports India and Pakistan to become full members simultaneously in line with the development of the grand 'Maritime Silk Road' scheme proposed by China last year," Li told The Bug Pit, adding that secure access to the Indian Ocean is valued not just by China but by the Central Asian SCO members as well.

So what will expansion do to the organization? It could strengthen China's role as a regional security provider. "An expanded SCO will be in a better position to achieve Xi’s vision of becoming the regional security heavyweight," wrote Shannon Tiezzi in an analysis at The Diplomat. "Despite a tendency to see the SCO as a competitor to NATO, Chinese leaders stress that the SCO is something entirely new. In Dushanbe, Xi announced that 'SCO members have created a new model of international relations — partnership instead of alliance.'”

It could also, however, dilute the group's already meager powers. After expansion the SCO "will become even more of a symbolic organization rather than a vehicle for any kind of substantive regional integration or cooperative problem solving," said Alexander Cooley, a Eurasian politics expert at Barnard College. "But the inclusion of India and Pakistan will take the spotlight away from the China-Russia relationship, and tensions over the organization's purpose and role, and recast the organization as a more comprehensive regional forum."