What does China’s BRI mean for Central Asia’s water future?

The Belt and Road Initiative could exacerbate Central Asia’s water tensions, a new paper argues, and Beijing seems to have thought little about the risks. 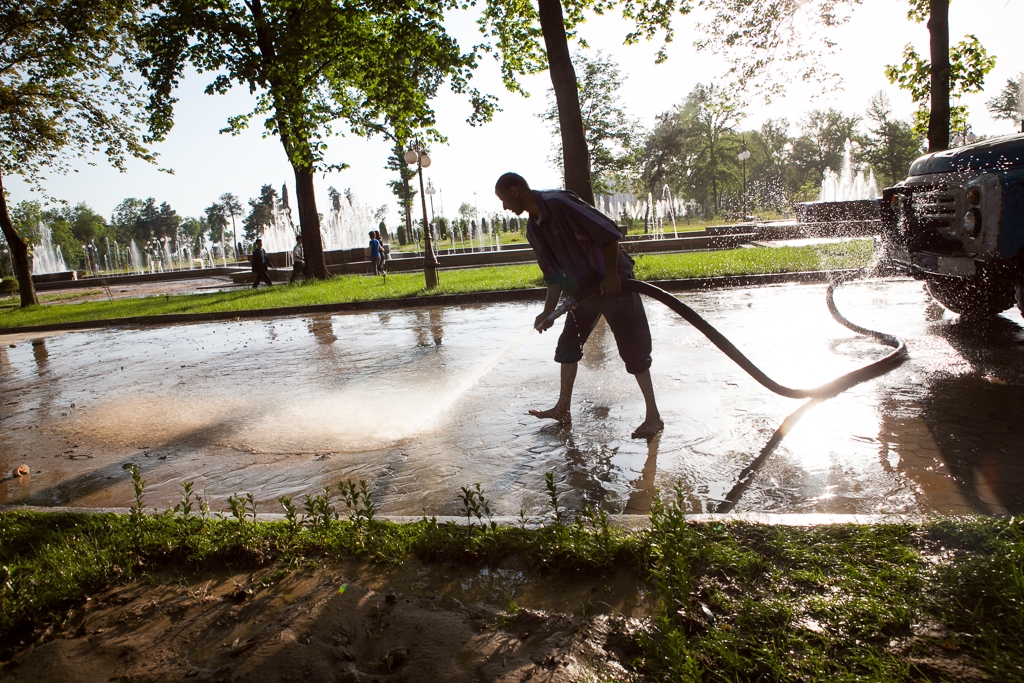 Enough for everyone? Washing the streets of Dushanbe (photo by David Trilling)

For Central Asia, China's Belt and Road Initiative is the biggest infrastructure drive in generations. And like the Soviet mega dams, mines, and devastating cotton monoculture that preceded it, the BRI is poised to foment problems of water sharing and pollution for generations to come.

A new paper flags questions about how the BRI – a shapeless and shifting cluster of projects financed by Beijing, often in extremely corrupt countries – is impacting precarious water supplies across Central Asia, questions that regional governments and their Chinese partners have not answered.

Water is “possibly the most serious problem along the [BRI’s] route,” write Melinda Davies of the University of Queensland and Nathanial Matthews of King’s College London in the International Journal of Water Resources Development. And it is unclear “whether the development proposed through the BRI, and the rapid economic stimulation it will bring, will place too great a burden on an already disjointed and dysfunctional water management system.”

Since independence from the Soviet Union in 1991, the five Central Asian republics have bickered over what were once common resources managed by Moscow. Though Uzbekistan’s 2016 change in leadership has quieted some of the most vicious disputes, the five have shown little progress coordinating to address persistent water shortages, amplified by growing populations and climate change.

The authors hope China can play a constructive and unifying role; it will see no benefit from socio-political instability on its western flank. But precedent suggests that Beijing lacks the deft touch necessary. Chinese companies have a well-documented history of opaque deals in the region; there is a persistent lack of coordination among BRI contractors; and Chinese developers are not known for considering public opinion even in the face of profound skepticism about their motives. (As a sign of things to come, Kazakhstan already worries about China’s usage of the Irtysh and Ili rivers before they flow over the border, the authors point out.)

Davies and Matthews survey existing literature, including on water management in Chinese investments elsewhere, and interview regional experts and stakeholders about how industry, hydropower, and agriculture are impacting water supplies and cooperation. They find little evidence of a thoughtful approach to managing the inevitable tradeoffs, for example when an upstream country increases water usage for cement production and a downstream country needs that water to grow tomatoes: “Water resources and their management currently do not appear to be specifically referenced in any policy documents or proposals relating to the BRI; and the initiative does not have any associated transboundary water cooperation frameworks.”

Cement production is one of many industries fueling concerns that China, in its efforts to green its own economy, is exporting its most polluting industries. Tajikistan’s cement output has increased tenfold in the last five years thanks to Chinese finance; it exported almost 1 million tons in the first nine months of 2020. But Tajikistan’s leaders show little interest in regulating industry or allowing civil society activists a seat at the table.

Though the BRI is often associated with road and rail networks, agriculture is lately generating excitement. As China grows into one of the world’s largest food importers, Central Asian governments are keen on the job-creating opportunities. Increased yields could benefit locals, too. But an expansion of agriculture adds pressure on water supplies.

Will China share knowledge about how to use water efficiently and help repair leaky Soviet infrastructure? Anyone driving around the Ferghana Valley can see how desperately the canals need mending. The waste is monumental. So are the opportunities: “China’s Xinjiang province, which will be closely linked to Central Asia through the BRI, possesses advanced knowledge and technologies in terms of improving irrigation efficiency and tackling issues of salinization.”

At the moment, alas, “specific [agricultural] projects and initiatives remain largely unclear.” And local benefits may be limited, “particularly as Chinese companies […] regularly dispatch their own labor force, limiting demand for local employment, and there is also a risk of the overexploitation and degradation of water resources.”

Once again, tradeoffs are necessary. But who is making the tough decisions?

That’s unclear – and, with the desiccation of the Aral Sea a fresh memory, a cause for worry.

Without careful planning and a balanced, holistic approach to regional water supplies, the paper points out, “the history of the region’s unintegrated resource management demonstrates that unsustainable development has a limited and costly lifespan.”