What Does Greek Crisis Mean for Azerbaijan’s Energy Interests? 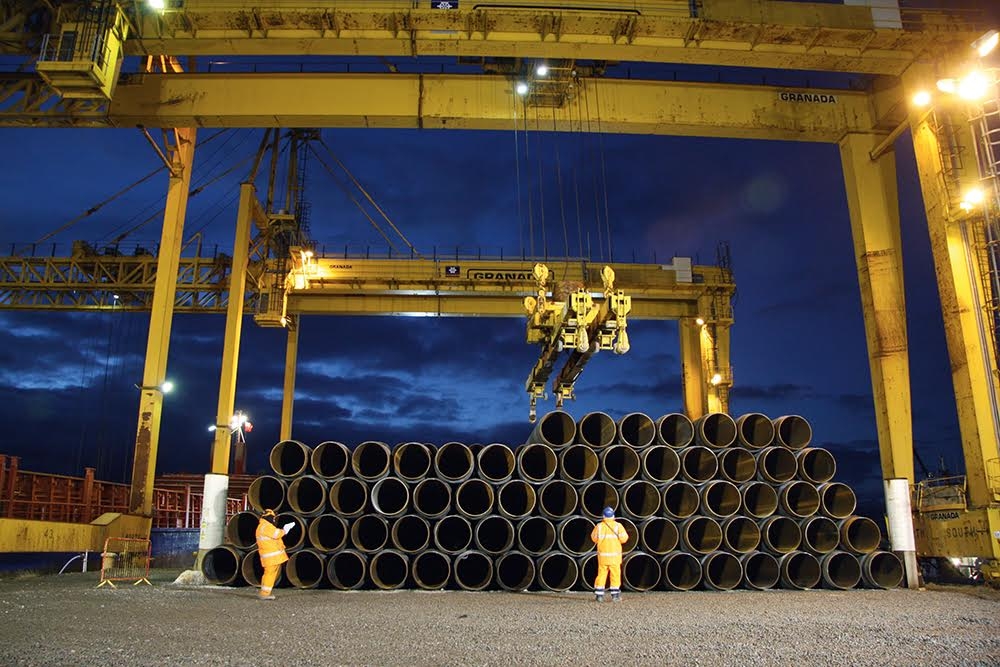 Workers stack sections of pipe to be used in the construction of the Trans Adriatic Pipeline (TAP). While Greece is interested in obtaining a stake in TAP, Azerbaijan’s SOCAR hopes to complete the purchase of a 66-percent stake in Greek gas transmission operator DESFA. (Photo: Trans-Adriatic Pipeline)

The near collapse of Greece’s economy has raised pressing questions for energy power Azerbaijan, which had viewed the country as a potential turbo boost for its energy ambitions in the European Union. Now, as Athens cleans house financially and talks deeper energy ties with Russia, Azerbaijan, which has an agreement to purchase a majority share in Greece’s gas distribution network, needs to protect its own interests, energy analysts say.

Azerbaijan’s entry point into Greece comes via the Trans-Adriatic Pipeline (TAP), an 870-kilometer-long gas pipeline which, by around 2019, will bring Greece, Albania and Italy 10 billion cubic meters of Azerbaijani gas per year – part of a 3,500-kilometer-plus-long pipeline network from the Caspian Sea called the Southern Gas Corridor.

In 2013, the State Oil Company of the Azerbaijani Republic (SOCAR) further strengthened its European targets by agreeing to pay 400 million euros (then $524.2 million) for a 66-percent stake in Greece’s state-owned gas distribution network, DESFA, its first such European acquisition. Via DESFA, which will operate the Greek section of the TAP pipeline, SOCAR also would obtain half ownership in a planned 182-kilometer-long branch to Bulgaria.

But Greece, since the beginning of 2015, has indicated that it wants to reduce SOCAR’s share of the network to 49 percent. And that it wants cheaper prices for the 1 bcm of gas it will receive annually from TAP.

SOCAR has resisted both requests, but, now, with a question mark over all of Greece’s assets, much less its ability to pay for gas, Baku may need to change its expectations.

“Greece’s huge debts stand to jeopardize the Southern Gas Corridor and Azerbaijan being a major shareholder in DESFA,” commented Mehmet Öğütçü, chairperson of the Istanbul-based Bosphorus Energy Club, a networking group of which SOCAR is a member.

For one, further delay on SOCAR’s acquisition of DESFA is likely. Under the terms of Greece’s bailout deal with the EU, a newly created fund may obtain control over Greece’s gas grid and the national gas company DEPA, but not until after October, Hellenic Shipping News reported on July 27.

One energy executive quoted by the publication, Aegean Gas Chief Executive Officer Theodore Theodoropoulos, said that, consequently, he does not think SOCAR’s purchase of DESFA “will proceed in its current form.”

At the same time, Baku’s own enthusiasm for DESFA may be growing cold.

Thanks to lower oil prices, SOCAR and Azerbaijan both have seen their revenue shrink. Furthermore, in January, the European Commission suspended deliberations about whether to approve SOCAR’s purchase of DESFA.

Reasons for the delay are not clear – some sources say the EU, others SOCAR – but energy expert Marco Giuli of Brussels’ European Policy Center, an independent think-tank, believes Russia inadvertently plays a role here.

EU legislation bars Russia’s Gazprom, the source of most of Greece’s gas imports and SOCAR’s distant rival in the campaign for European markets, from taking over DESFA. Gazprom in 2013 withdrew from a bid for DESFA’s parent company, DEPA.

“This is a matter of credibility. The EU does not want to be seen as allowing SOCAR to get what Gazprom couldn’t get,” Giuli said.

SOCAR, by contrast, holds only a 20-percent stake in TAP, a six-partner project which is exempt from EU rules requiring third-party access to pipelines.

SOCAR has not commented publicly on DESFA since the EU’s July 13 bailout deal with Greece, but on July 19, Azernews.az, an Azerbaijani-government mouthpiece, underlined that SOCAR’s takeover of the network would inject much needed cash into the Greek economy.

The original June 2013 purchase deal, however, allows SOCAR to opt out of DESFA if the sale is not concluded within two years, Greek and Azerbaijani media outlets have reported.

Yet even if the DESFA deal falls through, analysts believe that Greece and Azerbaijan will remain energy partners.

If Greece opts out of the TAP pipeline, it will incur penalties. “So, it concerns Europe, rather than Baku,” noted Ilham Shaban, director of the Baku-based Caspian Barrel, an energy research center.

Shaban, however, sees no risk for such a prospect. Greece needs to promote its own energy security. “Athens will hang on to Azerbaijan so that it chooses Greece for its resources to flow into central Europe,” he predicted.

For Greece, the construction contracts, thousands of jobs and related investment from the TAP pipeline are “godsent gifts,” agreed Öğütçü.

Greece earlier had expressed interest in also taking a share in TAP, and in receiving annual transit fees. Azerbaijan welcomed the first proposal and rejected the second.

But, at the same time, Greece, led by the left-wing Syriza Party, also is quite happy to hold on to Russia, the source of most of its gas and oil imports.

On July 12, as Greece debated the EU bailout deal, Russia, which signed an agreement in June with Athens to run its proposed 47-bcm Turkish Stream gas pipeline across Greece, pledged to consider “direct energy supplies” to Greece.

Details have not emerged, though Moscow recently reemphasized its commitment to the pipeline agreement.

Energy analyst Giuli, citing EU legislation, plays down the prospect of such a partnership, however. “One can, of course, speculate about Greece looking for Russian financial support, but, in the end, Greece cannot commit exclusively to one single source [of gas]…”

The EU, meanwhile, recently underlined its support for Azerbaijan’s energy ties to Europe. “Azerbaijan is our reliable and strategic partner in the energy field, and we want to take this partnership further,” European Council President Donald Tusk said in Baku on July 22.

Writing on July 24, Azernews.az noted that Russia will need “many years” to find the funds for the $50-$60-billion pipeline. By contrast, it boasted, Azerbaijani gas from TAP would be “finding clients long before … Russian gas arrives…”