What Is the EU’s Game in the Caucasus Separatist Territories? 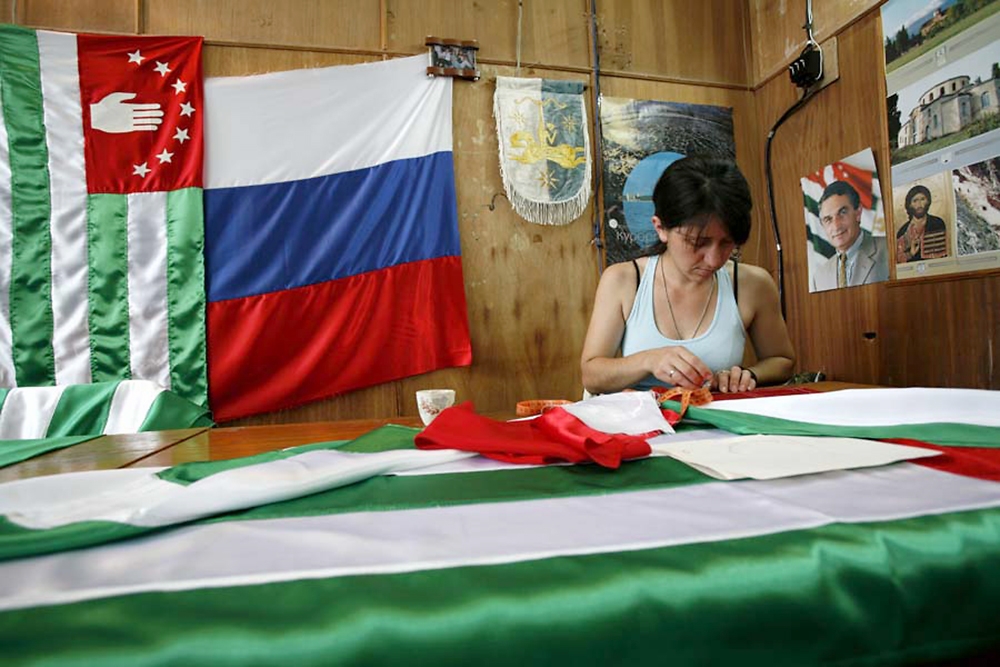 In preparation for independence day celebrations in 2006, a tailor sews Abkhazian flags in a Sokhumi shop, which also displays a Russian flag. Already under the protection of Russia, the Georgian breakaway region is taking steps toward improving relations with the European Union. (Photo: Justyna Mielnikiewicz)

The European Union is making a push to raise its profile in two trouble spots in the South Caucasus, Abkhazia and Nagorno-Karabakh. Brussels insists its forays in the region are nothing more than routine diplomacy. But some observers believe the EU is hoping to push back against Russia’s troublemaking in Ukraine.

The opening EU diplomatic thrust was aimed at Abkhazia, a Black Sea territory that broke free from Georgia in 1993. It remains financially dependent on Russian subsidies to maintain a semblance of self-government.

On February 3, the EU’s special representative for the South Caucasus, Herbert Salber, met with Abkhazia’s de facto foreign minister, Viacheslav Chirikba, in the region’s capital, Sokhumi, to discuss the EU’s activities, according to official reports. The meeting was held a day before Russian President Vladimir Putin signed an “alliance and strategic partnership” agreement with the separatist-controlled territory, which Moscow recognizes as an independent country.

Initial media reports from both Abkhazia and Georgian-controlled territory suggested that the EU intended to establish a representational office in Sokhumi. If accurate, such a move would mark a major policy shift; de facto Abkhaz officials long have insisted that Brussels treats Abkhazia on par with the Georgian government. To date, the EU supports de jure Tbilisi’s sovereignty over not just Abkhazia but also Georgia’s other breakaway territory, South Ossetia. The EU has virtually no access to South Ossetia, the scene of Georgia’s 2008 war with Russia.

Boris Iarochevitch, deputy head of the EU Delegation to Georgia, moved quickly to quash speculation about a representational office. He told EurasiaNet.org the office in question would be an “EU info center” that would explain what the European Union is and how it works. The idea had been floated for some time with Tbilisi’s consent, he told EurasiaNet.org. “Mr. Salber may have mentioned that and it was misinterpreted,” Iarochevitch surmised.

Observers in Abkhazia are not expecting much to come out of the EU visit. Liana Kvarchelia, co-director of the Center for Humanitarian Programs in Sokhumi, believes that “the overall geopolitical situation” – a reference to antagonism between the EU and Russia over Ukraine – will likely negatively impact any relations between Abkhazia and the EU. She stressed that in engaging with Abkhazia, the EU would have to be “careful to avoid pre-conditions that would link Abkhazia to Georgia in one way or another.”

Other Abkhaz, such as Maxim Gunjia, vice president of the Chamber of Commerce and Industry in Abkhazia, and the territory’s former de facto foreign minister, are skeptical about the EU’s intentions.

“If an EU businessman said he wanted to establish trade relations, I would say ‘yes,’ but a representative of the EU coming from Georgia? He is coming from a failed policy, just to irritate Russia,” Gunjia said. “I do not place much value in their rhetoric.”

Representatives of Abkhazia’s de facto foreign ministry could not be reached for comment.

Iarochevitch admits that the EU’s “margin of maneuvering” in Abkhazia is narrow, but believes that any chance to expand its activities outside of its role as a mediator in peace talks with Moscow and Tbilisi should be used. “I do not know how far Moscow will let us go,” he said.

Few believe that Moscow would embrace the idea of the EU opening an info center in the region.

Sergei Markedonov, associate professor of foreign policy and regional studies at the Russian State University for the Humanities in Moscow, claims that Russia did not object to the EU’s attempted contacts with Sokhumi before the Ukrainian crisis, but that “[t]his attitude, however, changed after Ukraine.”

Officials in Tbilisi, eager to expand ties with the EU and to reintegrate Abkhazia, have not commented on the trip. Henri Duquenne, spokesperson for the European Union's special representative, scoffed at the notion that the EU is challenging Russia in Abkhazia. “How can you compete with Russia in Abkhazia? All the billions of rubles over the years, even during the [financial] crisis, compared to us?”

Meanwhile, the EU move in Karabakh sparked speculation about Brussels’ involvement in the peace process.

On February 10, Salber met in the Armenian capital, Yerevan, with Karen Mirzoian, de facto foreign minister of the breakaway region of Nagorno-Karabakh, an Armenian-defended separatist territory claimed by Azerbaijan. The talks were Salber’s first with a de facto Karabakhi official since his July 2014 appointment, and, like the Abkhazia trip, was billed as nothing unusual.

Some local analysts, however, see a larger role for the EU in both Abkhazia and Karabakh. “[T]he EU is alarmed by the Ukraine situation and understands its possible implication for the South Caucasus and Putin’s increasing activities on alternative integrationist projects requires greater involvement,” asserted Leila Aliyeva, president of Baku’s independent Center for National and International Studies.

The EU’s Duquenne maintains that Brussels has no interest in taking on a larger role in Karabakh. Since 1992, talks between Armenia and Azerbaijan over the breakaway region have been overseen by the OSCE’s Minsk Group, which comprises France, Russia and the United States.

“We support [the Minsk Group’s] work and do not want to create problems with the OSCE, especially since we all want the same thing,” he said.

The Azerbaijani government recently has complained about the lack of progress with the Minsk Group talks, but has not given any public sign of wanting to curtail Russia’s role in the talks.

Unlike in Georgia, Moscow supports the territorial integrity of Azerbaijan, which claims Karabakh as its own. Even so, Moscow provides both Armenia and Azerbaijan with military equipment.

Azerbaijani press reported that Baku welcomed the EU discussions in Yerevan as a peace-building measure.

Ultimately, the EU does not have much room for maneuver in the Caucasus breakaways, said longtime Caucasus analyst Thomas de Waal, a senior associate at the Carnegie Endowment for International Peace in Washington, DC. The EU’s recent actions in Abkhazia display only “the same good intentions of a few,” he wrote in an email to EurasiaNet.org, while in Karabakh, “the Minsk Group still leaves very little role for the EU.”