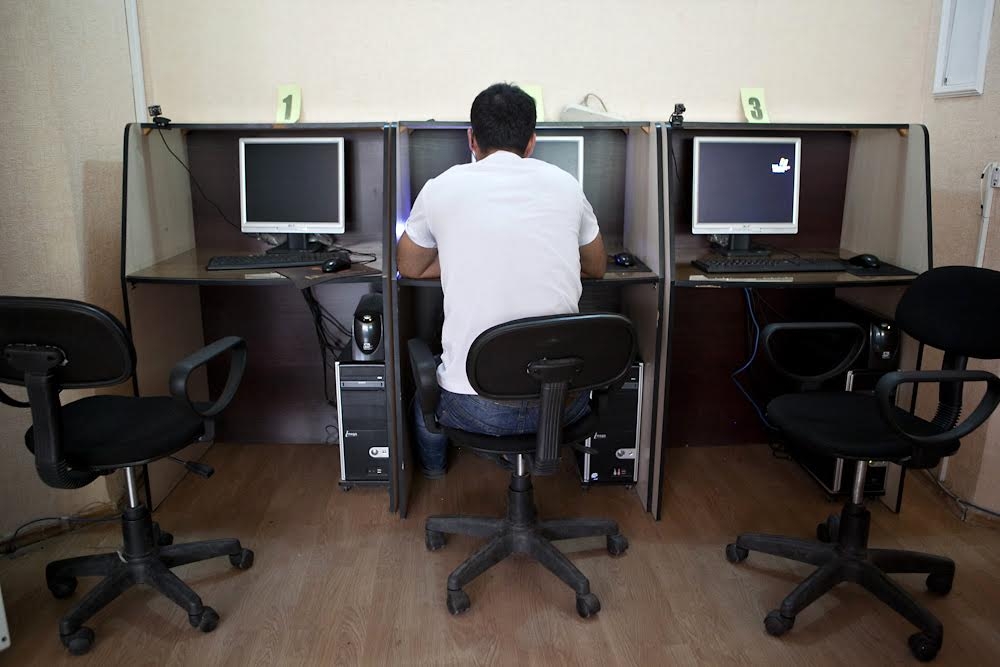 Internet speeds for computer users in Tajikistan, as in this Internet cafe in Dushanbe, are generally relatively poor compared with countries in the neighborhood, such as Uzbekistan, Kyrgyzstan and Kazakhstan. At one time Tajikistan was considered something of a regional leader in Internet innovations, with 3G arriving in 2005 and 4G in 2012. (Photo: David Trilling)

“We have the Internet!” the receptionist at Kulyab’s newly opened Chanor Hotel volunteered with disconcerting eagerness. And so they should.

The hotel, which opened in the southern Tajik city amid much fanfare on August 31, was built with 46 million somoni ($7.2 million) in financing from the government’s communications agency.

Internet users might see irony in the fact that a government agency has helped build a hotel with reliable web access. In recent years, it has become increasingly problematic for Tajiks to obtain news online, as officials have taken steps to limit access to information.

President Emomali Rahmon’s administration has worked assiduously over the years to tighten its grip on power, underscored by official efforts in late August to restrict the main opposition Islamic Renaissance Party. In keeping with the administration’s governing style, official news outlets in Tajikistan tend to be light on information and lack analysis. That is why people increasingly turn to the Internet for news about political developments and unfolding disasters, like the deadly floods that struck Tajikistan in July.

That free flow of news and opinions, however, seems to unnerve authorities, who tend to take fast action to suppress signs of dissent and discontent. Officials in late August, for example, ordered Internet providers to deny access to several websites, including Facebook and YouTube. That policy was implemented by Beg Zukhurov, Tajikistan’s communications agency chief, who is related to President Rahmon by marriage.

Asomiddin Atoev, chairman of Tajikistan’s Association of Internet Providers, said blocking websites is counterproductive and inefficient. “Public servants who know nothing about the nature of the Internet and cannot use it properly consider this measure expedient. This is self-deception,” Atoev told EurasiaNet.org. Younger web-users in Tajikistan have long grown used to such blockages and are adept at using proxy servers to reach their favorite sites.

Every wave of censorship ignites feverish speculation about the possible pretexts, which the government never makes public. Online users queried by EurasiaNet for this article offered a variety of alternatives for the most recent blockages.

Some suggest that authorities wanted to close off fora in which people could complain about lavish expenditures on Independence Day celebrations, which took place on September 9. The government also has spent heavily in recent years on what are widely seen as vanity projects, including a giant flagpole and mega-teahouse. The topic of state spending may be especially sensitive these days, given the gloomy economic indicators recently in what is already Central Asia’s poorest state. Tajikistan is heavily dependent on remittances from labor migrants, most of them working in Russia. Russia’s Central Bank last week reported that remittance flows to Tajikistan had dropped to $696 million in the first half of this year, compared to $1.7 billion in the same period in 2014.

Another potentially sensitive area for the government is an ongoing crackdown on devout Muslims. Authorities are said to incessantly harass young men wearing beards, sometimes with reportedly tragic outcomes, and discourage traders from dealing in the sale of excessively Islamic clothing to women.

A recent incident involving Dushanbe resident Amirbek Isoev vividly illustrated social media’s role in the government’s crackdown. The man celebrated his birthday in a restaurant and then posted pictures on Facebook. That drew the attention of the authorities, who punished him with a $600 fine under an interpretation of a 2007 law that makes it illegal to hold celebrations “beyond the family circle.”

Social networks on occasion have proven nettlesome for officials by raising questions about corruption. A video uploaded to Facebook on August 27, for example, depicted a memorial service in the northern town of Konidobom for the late mother of a provincial chief prosecutor. The footage, filmed outside a vast teahouse, raised hackles among many viewers because it showed rows of expensive car unaffordable to most Tajiks that belonged to those attending the memorial service. Many of the vehicles bore vanity license plates readily embraced by the nouveau-riche set.

The history of blocking websites dates back to the eve of a 2003 referendum to abolish a constitutional provision limiting the president to only one term in office. The practice was seldom applied in the following years, but it has become more commonplace since 2010.

Seven Internet providers operate in Dushanbe, each with its own gateway infrastructure to the global network. The four largest mobile phone company operators act as providers. Speeds are generally relatively poor compared with countries in the neighborhood, like Uzbekistan, Kyrgyzstan and Kazakhstan. Prices for Internet subscriptions, meanwhile, rarely conform to level of service provided.

It was not always that way.

Until recently, Tajikistan was considered something of a regional leader in Internet innovations. In 2005, it was among the 17 countries that introduced the 3G format for commercial use. The even faster 4G format was launched in 2012.

Flagging connection speeds are hampering educational prospects for some young Tajiks. Online, long-distance programs sponsored by the Russian government and designed to help students gain a stronger command of the Russian language are hindered by poor Internet facilities, one foreign university professor told EurasiaNet.org, speaking on condition of anonymity.

Internet provision is also far from ideal even in the most expensive foreign-owned hotels in the capital, Dushanbe.

Personalities may be part of the problem.

Connection speeds were, by Tajikistan’s normal standards, startling in Kulyab’s Chanor Hotel, if only in the reception area, when EurasiaNet.org visited in early September. Other amenities at the hotel were less satisfying. Plumbing had not yet been activated, which meant guests were compelled to use buckets to bathe.

Some clues suggested financial resources and Internet speeds may have been diverted to the Chanor Hotel, in part, to serve the pride of members of Tajikistan’s elite, like communications tsar and the hotel’s builder Beg Zukhurov.