What’s the future of Azerbaijan’s “ancestral lands” in Armenia?

Ilham Aliyev is playing both good cop and bad cop with Armenia, offering to formally recognize their territorial integrity while also suggesting that he has the right not to. Post-war report. 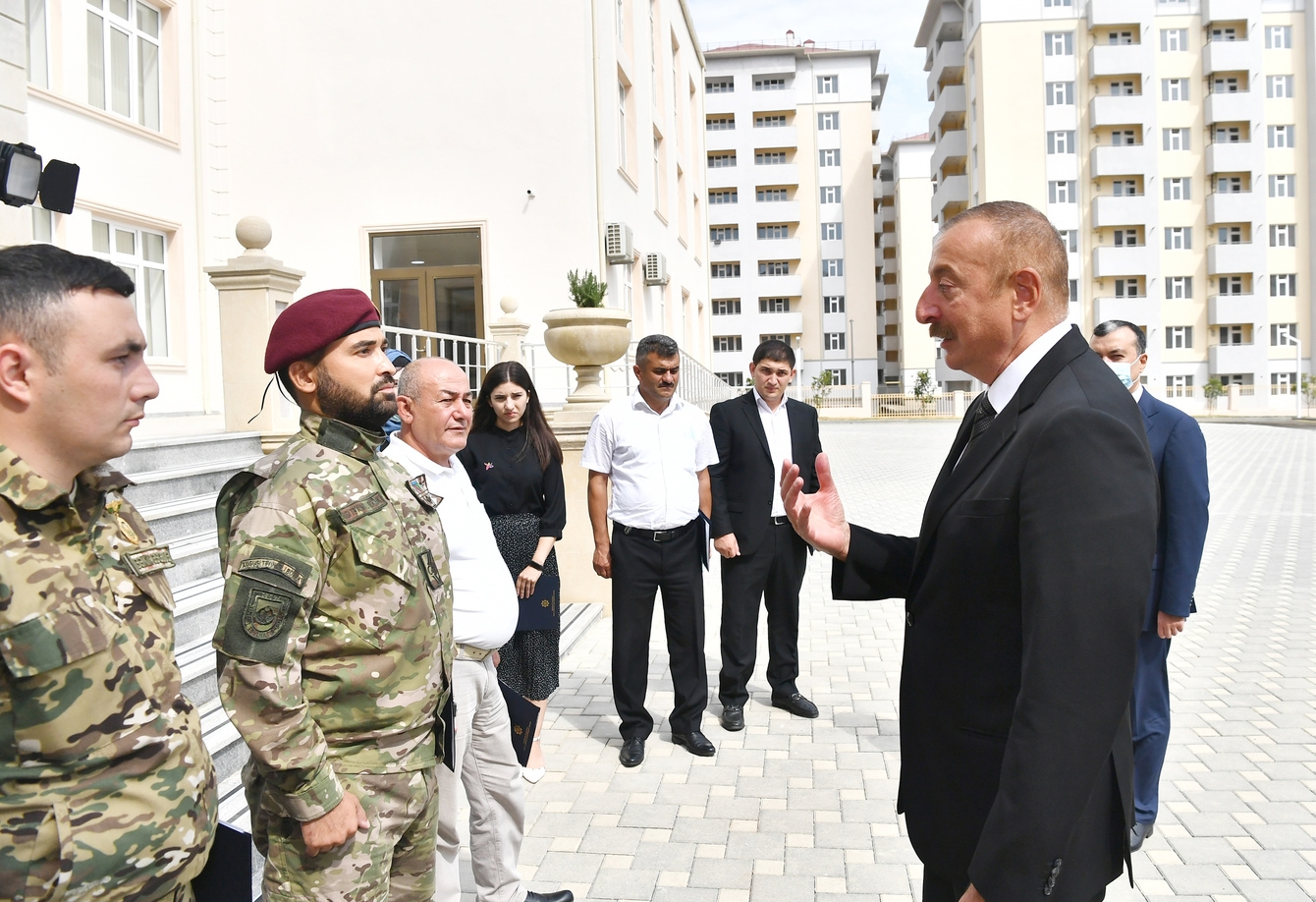 So: Is Azerbaijan making territorial claims against Armenia?

It’s hard to say, which was no doubt Aliyev’s aim, as Azerbaijan is trying to ratchet up the uncertainty in the apparent hopes of convincing Armenia to make a deal to formally resolve their decades-long conflict.

Last week, when Azerbaijan rolled out what it presented as a technical reorganization of the country’s regional economic zones, one of the new zones had an intriguing name: East Zangezur, on the far western edge of Azerbaijan. The name implies the existence of a “West Zangezur” – across the border in Armenia, in what Armenians now call Syunik – and the idea that East Zangezur may thus be incomplete.

It didn’t take long for the other shoe to drop, as Aliyev this week went straight to the point. “West Zangazur is our historical land,” he said in a July 14 speech opening a new housing complex for families of soldiers killed in last year’s war. He argued that the territory is rightfully Azerbaijani and that Azerbaijanis have the right to “return” there – without specifying what exactly “return” entails. He stopped short of making an explicit territorial claim, but made vague threats to Armenia.

“The Soviet government tore Zangazur apart from Azerbaijan and handed it over to Armenia. It is relatively recent history – 101 years ago. So why should we say that this didn't happen? Why? We are telling the truth. It is the land of our ancestors: the whole of Zangazur – East and West Zangazur. In Armenia they now say that Ilham Aliyev is making territorial claims. If there is East Zangazur, then there is also West Zangazur. Yes, West Zangazur is our ancestral land. I said that we have to return there,” he said. “We will and we are already returning there. No one can stop us.” And much more in that vein.

It’s a formulation he has used repeatedly in the past: aggression mixed with just enough plausible deniability.

Aliyev’s speech was followed the next day by even more explicit claims from Tural Ganjali, the Azerbaijani member of parliament representing what Azerbaijanis call Khankendi and what Armenians call Stepanakert, the capital of the self-proclaimed Nagorno-Karabakh republic. “A merging of Eastern & Western #Zangazur provinces of Azerbaijan will boost economy of the South Caucasus region definitely,” he tweeted. “This combination will positively address new realities in the region after ending 3 decades of occupation.”

There always have been multiple ways to interpret Baku’s claims about Azerbaijani “historical lands” in what is today’s Armenia. In the long-running information war with Armenians over the region’s history and who rightfully owns what, they serve as a riposte to Armenians’ own exclusive claims to territory in today’s Azerbaijan. They also could, though, lay the intellectual rhetorical foundation for future explicit territorial claims should the opportunity for that arise. (The possibility that the two peoples could possibly live together, as they did for centuries until the collapse of the Soviet Union, is no longer entertained.)

In the case of Aliyev’s remarks this week, the explanation is relatively simple, and it’s a common one these days: it’s a bargaining tactic.

Azerbaijan has been increasingly pushing Armenia for a formal peace agreement to resolve the conflict, and Aliyev returned to the theme in the speech directly after making the not-quite-maybe-territorial claims.

“We are prepared to sign a peace agreement with Armenia,” he said. “However, there is no reaction from Armenia; there is no official reaction. The information we have received through unofficial channels is that Armenia is not ready for this. I think this would be a big mistake.” The first condition of a peace agreement, he added, would be “recognition of each other's territorial integrity.”

Taken together, it looks like Aliyev is trying to make these quasi-claims on Armenian land in order to make it look like a concession of sorts when in a future peace deal Azerbaijan formally recognizes Armenia’s territorial integrity. And in his speech, he saved his most explicit threat for the discussion of the peace deal. “Let them think carefully before it is too late,” he said. “Just as in the past, had they voluntarily vacated our lands, they would not have been humiliated like that. Our proposal is the proposal of the winning country, the proposal of the powerful side, the offer of the victorious people. If there is an adverse reaction to this in Armenia, it is up to them. But again, they will regret it.”

This rhetorical barrage coincided with a bit of an uptick in violence between Armenian and Azerbaijani forces. One Armenian soldier was killed on July 14 in an exchange of fire in Yeraskh, on the border with Nakhchivan, the Armenia’s Ministry of Defense reported. The Azerbaijani Ministry of Defense reported on July 16 that exchanges of fire were continuing in the area. Exchanges of fire also were reported near Shusha, in Karabakh.

The Azerbaijani MoD also reported shooting between the Kelbajar region of Azerbaijan and what it identified as “the village of Zerkend in the Basarkechar region” of Armenia. Azerbaijani social media commentator Javid Agha noticed the phrasing, which appears to be yet another informal quasi-claim on Armenian territory. These are the Azerbaijani names for what Armenians call the village of Kut in the province of Gegharkunik. “AzMOD usually uses modern administrative names for Armenian settlements,” Agha tweeted. “This is new.”

If the goal is to force Armenia to the bargaining table, it remains to be seen how effective this strategy of coercion is going to be. Armenian Prime Minister Nikol Pashinyan responded to Aliyev’s claims, denying that Armenia was resisting efforts toward a peace agreement and other issues like demarcating the border. Azerbaijan’s strategy is “predictable,” Pashinyan said, aimed at “creating fake grounds for building an aggressive policy, which we have seen in recent days.” Pashinyan did not, however, further address the idea of coming to a formal peace agreement.

As Aliyev said, the key element of a peace agreement is going to be mutual recognition of each other’s territory. And the sensitivity of that question was highlighted again this week when the Azerbaijani government took the Baku ambassadorial corps to visit Shusha, the jewel of the territories that Azerbaijan won back in last year’s war.

The visit quickly became the source of controversy, however, because three key embassies skipped out: the United States, France, and Russia. These are the co-chairs of the OSCE’s Minsk Group, the body that was in charge of peace negotiations between the two sides before last year’s war but which has since then been shunted aside, its role now unclear.

The three countries have refused to explain why they skipped the trip. But both in Armenia and in Azerbaijan the visit to Shusha was clearly interpreted as a de facto recognition of Azerbaijani sovereignty over the city. (Foreign diplomats virtually never visit Armenian-controlled Karabakh in sensitivity to its contested position.)

In Azerbaijan, the episode resulted in an obviously choreographed campaign against the three countries, as various media and political figures lined up to denounce the snub. Former foreign minister Tofik Zulgufarov went so far as to say the three ambassadors should be “isolated” and not invited to anything else until they visit Shusha.

The 46 ambassadors who did go, meanwhile, got it from the other side. Armenia’s Foreign Ministry handed out notes verbales to the ambassadors from those countries, complaining that the visit to Shusha was “utterly unacceptable” given that it considered the city to be “occupied territory” of the unrecognized (even by Armenia) Nagorno-Karabakh Republic.

All of that may be an overinterpretation. The American, Russian, and French embassies also don’t appear to have participated in any of the many other trips that Baku has organized for the diplomatic corps to other parts of the retaken territories, including those like Aghdam and Jabrayil that Armenia no longer claims. The trips are invariably turned into PR events by the Azerbaijani government, and the Minsk Group co-chairs may think it prudent to stay out of them altogether, even the ones to less controversial regions. But it all speaks to the diplomatic minefields that lay ahead whenever a real peace agreement starts to be worked out.