Nikol Pashinyan’s movement didn’t come out of nowhere. Yet despite his success, many forerunners still languish in jail. 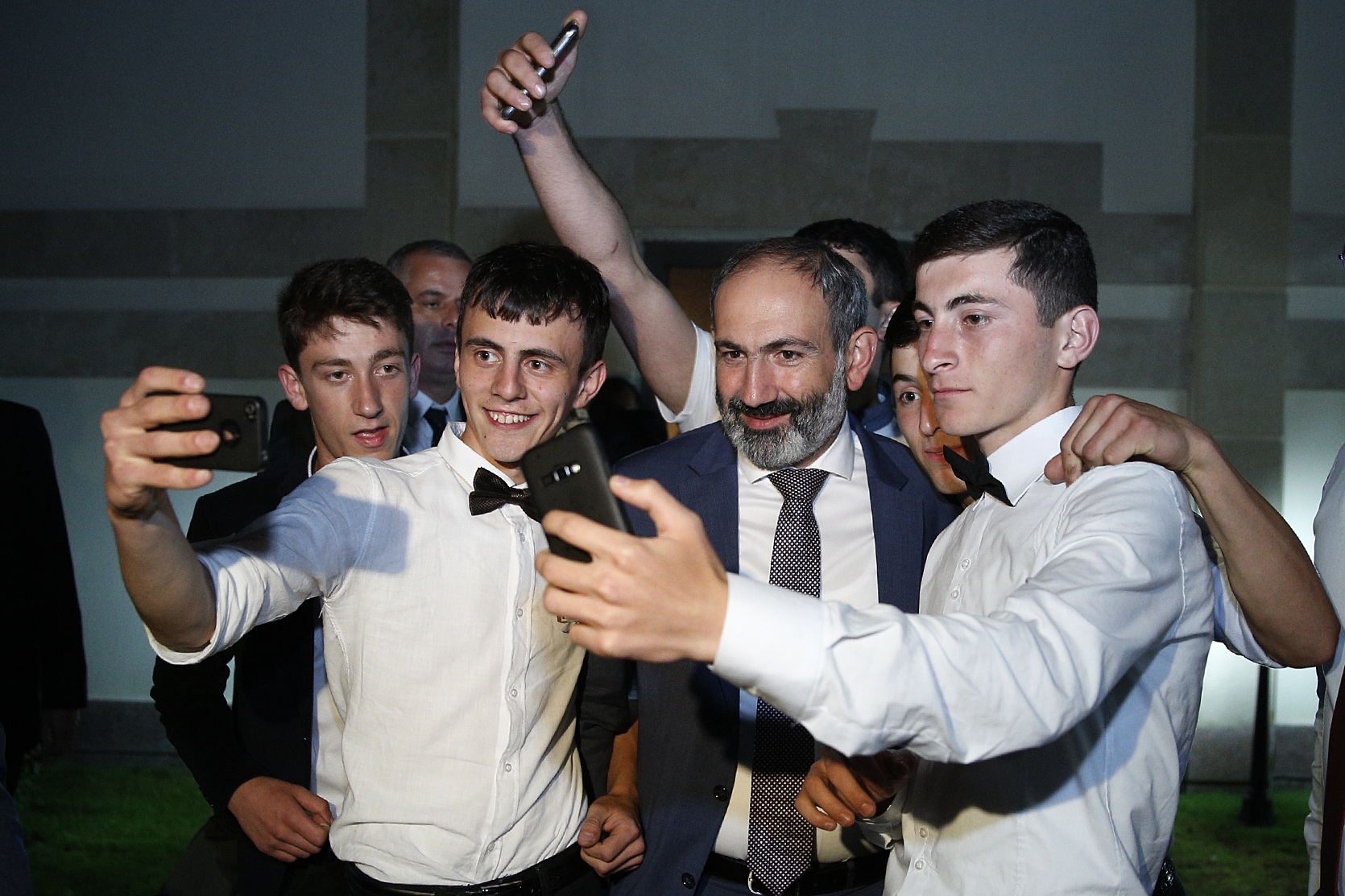 But Pashinyan’s movement didn’t come out of nowhere. True, he was more successful than his predecessors in opposing Sargsyan, but he built his campaign on their attempts to change Armenia’s direction. Some have been released, but others still languish in jail. And Pashinyan, who initially talked broadly about releasing political prisoners, has grown quiet about their fate.

To be able to deliver on Pashinyan’s promise of a snap election, the new government “seems to have made an agreement with the former regime,” Andreas Ghukasyan, a former presidential candidate who had been held in pre-trial detention until May, told Eurasianet.

Pashinyan also appointed as ministers some of Sargsyan’s former allies from the Dashnaktsutyun and Prosperous Armenia parties, and so far has refrained from tackling judicial reform. The judicial system is still controlled by prosecutors picked by the previous government and judges that many believe are loyal to oligarchs close to Sargsyan. Indeed, under Sargsyan, “the judiciary did not generally exhibit independence and impartiality,” said the U.S. State Department’s 2017 human rights report.

Sargsyan may be out of office, but these courts are still holding his rivals. Some call these figures political prisoners, from Shant Harutyunyan and his supporters – jailed in 2013 after clashes with riot police – to the decorated Karabakh war commander Samvel Babayan.

“Realpolitik is in conflict with the issue of political prisoners,” said Ghukasyan.

Ghukasyan is preparing to participate in the snap election, probably this fall, and raising funds to establish an Armenian Constructive Party. The party would pursue a social-liberal agenda and question Armenia’s membership in Russia-led organizations like the Eurasian Economic Union and Collective Security Treaty Organization. However, “judicial reform is going to be a key issue. That’s what Armenian voters expect from us,” said Ghukasyan, who has also called for Sargsyan to be investigated for presiding over elections marred by fraud last year, and for territorial losses during the 2016 conflict with neighboring Azerbaijan.

The year 2016 marked the worst political crisis of Serzh Sargsyan’s second presidential term. That April, a resumption of fighting with Azerbaijan over the disputed territory of Nagorno-Karabakh killed 94 Armenian soldiers, including volunteers and reservists. Armenian-backed troops lost three-square miles of territory.

Many were outraged by Sargsyan’s attempts to downplay the defeat, and by his reluctance to protest Russian arms sales to archrival Azerbaijan. Sargsyan responded to the criticism by cracking down, beheading what was left of Armenia’s non-parliamentary opposition forces.

Leaders of the Founding Parliament, a hardline group, were arrested – among them Jirayr Sefilian, a Lebanese-born Karabakh war hero and longtime foe of Sargsyan's – for allegedly plotting a coup.

Then in July, the country was rocked by violence in the capital.

On July 17, 2016, armed men seized the Erebuni police station in Yerevan and called on people to take to the streets. The gunmen, among them six Founding Parliament members, demanded Sargsyan’s resignation and Sefilian’s release. Mass demonstrations, headed by Pashinyan and other opposition leaders, followed. During the 14-day standoff, three policemen were killed, several of the militants were wounded, and more than a hundred protesters were injured in clashes with police. According to Human Rights Watch, police “used excessive force against peaceful protesters and assaulted journalists reporting on the demonstrations.”

The gunmen were members of Sasna Tsrer – “The Daredevils of Sassoun” – a group that takes its name from a medieval epic about the Armenian struggle against Arab invaders. Only in the modern case, it was Sargsyan’s government, as a branch of “Russian colonial power,” that was cause for revolt.

In all, 32 men have been held since the unrest. Most are accused of seizing government buildings and illegal weapons possession; two are accused of killing police officers. There’s no consensus about this case among Armenia’s chattering classes. Some call the men radicals. Others point out grave violations of due process, including police beatings, that marred the trial from the very beginning.

At one Yerevan rally this April, the crowd suddenly started chanting "Sasna Tsrer! Sasna Tsrer!” while Armen Grigoryan – then a civil society activist, now secretary of the National Security Council – was on stage. Grigoryan hesitated for a moment, and then joined the chant: “Sasna Tsrer!” At many rallies in April and May, placards declared, “We must not forget our heroes. Sasna Tsrer shouldn’t be political prisoners.”

“They are prisoners of conscience, not criminals and should never be treated as such,” the placard’s author, artist and calligrapher Ruben Malayan, told Eurasianet.

The men allegedly involved or connected to the takeover are being tried in two groups, of 14 and 18 defendants respectively. Court hearings are scheduled this week. Since Sargsyan’s resignation, three defendants who didn’t participate in the standoff, but were accused of aiding the group, have been released.

The Founding Parliament was formed in 2012 by a group of Karabakh veterans and public intellectuals. For years, it held peaceful rallies and traveled to Armenia’s regions calling for regime change. In January 2015, the group’s leaders were beaten by police on their way to hold a demonstration in Karabakh. A few months later, they were briefly arrested. The Founding Parliament has never been widely popular, but it nevertheless played a role in Armenian politics, standing out from other groups with rhetoric about social justice, its refusal to engage in electoral politics, and its pro-Western foreign policy. The group advocates for “Armexit” – “the liberation of Armenia from Russian colonial rule” – and for a strategic alliance with America.

The group’s leader, Sefilian, whose release was among one of the demands of the gunmen who seized the police station, was sentenced this March to over 10 years in prison.

Pashinyan has repeatedly called Sefilian a political prisoner and deemed the verdict “bogus.” But since assuming the premier’s office last month, he has declined to comment on specific cases. In a video address, he reiterated his promise to release political prisoners but warned against demanding specific actions from the new government, saying that any intervention from the executive branch would jeopardize the independence of the judiciary. So far, First Deputy PM Ararat Mirzoyan has been the only senior official to take a position on this case, saying that “Sefilian must be promptly released because he’s a political prisoner.”

Questions about Sefilian’s fate grew in mid-May, when Garegin Chugaszyan, the Founding Parliament president and one of Armenia’s most respected public intellectuals, was released from detention, but continued a hunger strike to demand Sefilian’s release. On May 24, Pashinyan met with Chugaszyan. The two had a lengthy conversation, after which Chugaszyan suspended his hunger strike and declared they had developed “a roadmap” to release Sefilian.

A hearing was scheduled for May 30, but it didn’t happen. Armenia’s police chief Valeri Osipyan, who was appointed by Pashinyan, decided against bringing Sefilian to court, citing “operative information” he received about Sefilian’s supporters planning to close down a street. Sefilian’s brother Toros called the development “sabotage against Nikol [Pashinyan].” The hearing was rescheduled for June 6.

Even without clarity on Sefilian’s release, the Founding Parliament’s Yegnukian told Eurasianet he is “very supportive” of Pashinyan. He spoke highly of the civil society activists Pashinyan appointed to key government positions: “The young cabinet is very educated and eager. They’re clean.”

Preparing for a snap election

Insiders disagree over the chances these disparate opposition groups could join forces.

Ghukasyan – the former presidential candidate released from jail in May – argued that Pashinyan’s allies in the parliamentary Yelq bloc, the Founding Parliament, and his own new party should form a unified democratic front ahead of the snap election. Yegnukian of Founding Parliament agreed, saying “we have slight differences in approach but the end result is the same. We’re not the opposition to Pashinyan.” On June 5, Sasna Tsrer issued a statement endorsing the new cabinet: “We consider it our duty to stand above political disagreements and fully support Nikol Pashinyan’s government on all issues of statehood and the rule of law.”