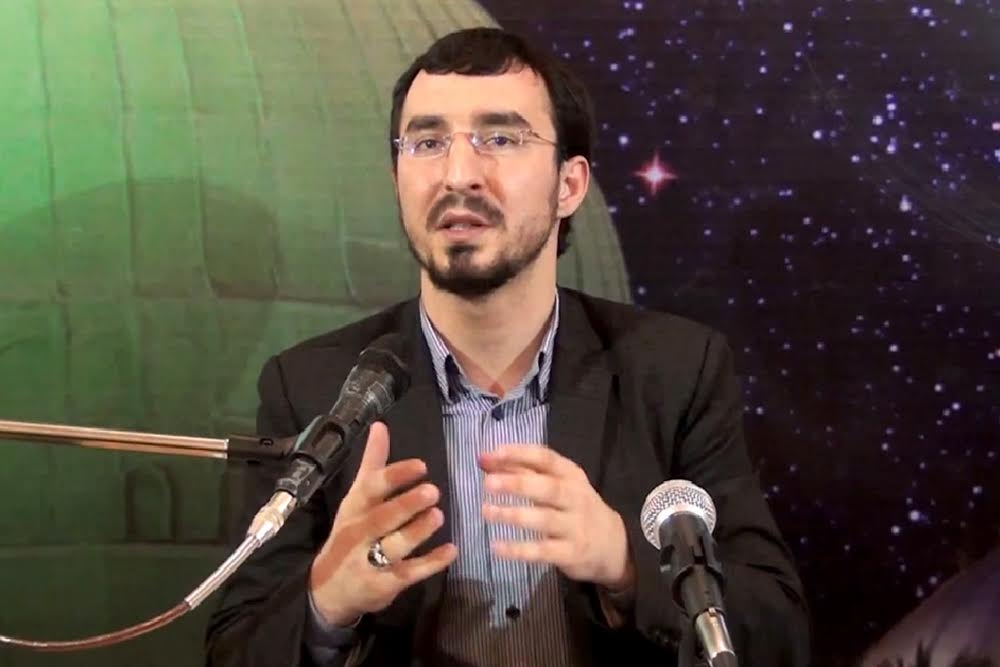 Taleh Baghirov, a religious scholar and activist, was sentenced in November 2013 to two and a half years in prison on illegal drug possession charges after sharply criticizing the government in his Friday sermon. He was released July 31 after serving his full sentence. (Photo: Azadliq Radiosu/RFE/RL)

The overall atmosphere in Azerbaijan is grim when it comes to freedom of speech and freedom of conscience. Yet, the release from prison of Taleh Baghirov, a young, charismatic Shia Muslim cleric, goes against the general trend in Azerbaijan. While it is certainly premature to call Baghirov’s release a “game changer,” it has implications for Azerbaijan’s Islamist politics that are worth pondering.

Baghirov was released from prison in late July after serving his full two-and-a-half-year sentence on what were widely seen as trumped-up drug-related charges. Local observers believe the real trigger for his arrest was a fiery sermon he delivered in Nardaran, a town known as a bastion of conservative Shia believers. In his sermon, Baghirov assailed President Ilham Aliyev as a “zalim,” or tyrant. The cleric then went on to recall the fate that befell another “zalim,” Iraq’s late president Saddam Hussein.

Upon his release, Baghirov let it be known, in case anyone doubted, that he would remain a public presence and be active in opposition politics. He called Azerbaijan “a big prison” and vowed to work to break the walls of this prison with the help of the Muslim Unity Movement, established in January 2015. He additionally called for the release of other political prisoners – not only the members of the Islamic Party of Azerbaijan (IPA), Islamists arrested for protesting the hijab ban in Azerbaijani schools, but also secular activists, including Leyla and Arif Yunus, Ilgar Mammadov, Intigam Aliyev and others.

Unlike the more cautious older generation of political Islamists, such as the former imam of the Baku-based Juma mosque Ilgar Ibrahimoglu, Baghirov had no qualms in reminding people that sharia law existed in Azerbaijan in 19th century. At the same time, he has stopped short of calling for its re-imposition in today’s Azerbaijan.

Baghirov’s outspokenness begs the question of how effective his Muslim Unity Movement, or Islamist politics in Azerbaijan in general, can be?

In some ways, developments in Azerbaijan are moving in a direction that favors Islamists. Aliyev’s administration in recent years has muzzled non-governmental organization representatives, independent journalists and rights activists, most of whom happen to be committed secularists. Meanwhile, mainstream secular political opposition, as represented by the Musavat Party and the Popular Front, has been largely discredited and rendered ineffectual. The Republican Alternative (ReAl) movement, once hailed as Azerbaijan’s best hope for a radical liberal reform, never shed its elitist image of a Baku-based club of Western-educated youth who were unable to connect with ordinary Azerbaijanis.

Islamists, at the same time, have built and retained an image of authenticity, incorruptibility and unshakeable commitment to the cause. Most importantly, despite experiencing repression, Azerbaijani Islamist activists are able to claim a moral high ground even among un-religious people. As in other Muslim countries, they also best the liberals in networking and organizational skills.

Social conditions in Azerbaijan also enable Islamist activism. Even though the country has made progress in recent years in reducing poverty, almost two-thirds of the country’s roughly 9.6 million people still are struggling to move out of the ranks of the working poor and into the middle class. Most Azerbaijani families still cope with inadequate housing conditions, a lack of educational opportunities, limited employment options and uneven access to public services. For many, expectations for improvements in living standards, driven by the country’s energy-export boom, have not been met. Corruption is widespread, and the gap between rich and poor is growing wider every day. It has reached the point where there is an entrenched public perception that the system benefits a select few at the expense of the rest.

The inability of both the government and the secular opposition to provide a convincing secular development narrative for those struggling on the cusp of poverty naturally opens the doors for grassroots, bottom-up Islamization. Authorities may be ill-suited to control such a process. A recent example when the authorities were wrong-footed was a demand of a group of local religious figures and “concerned citizens” to establish halal beaches in the Caspian towns of Lenkoran and Astara in the country’s south, near the Iranian border. Earlier, in 2012, a group of “activists” protested with stones and sticks an “immoral” international folklore festival in the town of Masalli. Such incidents are relatively rare for the moment, but Azerbaijani authorities can expect to face more of such incidents in the future.

The international context also can be seen as encouraging an expansion of Islamist activism in Azerbaijan.

Wisely, Azerbaijani authorities pursued the normalization of relations with Iran before Tehran struck its nuclear deal with international powers. Aliyev’s administration and Iranian leaders have a shared interest in containing what is known in Azerbaijan as the Salafist threat. The clearest manifestation of this danger is the hundreds of Azerbaijanis who are known to be fighting with the Islamic State (IS) and Al-Qaeda in Syria and Iraq. There are communities in Azerbaijan’s north, as well as the city of Sumgait, where the Salafist influence is on the rise.

But Baku may have to pay a price for working with Iran to fight Salafism: the clerics who run Iran’s Islamic republic remain interested in exerting greater spiritual influence over Azerbaijan’s Shia believers. Thus Aliyev’s administration might have to tolerate some Iranian proselytism in Azerbaijan.

Of course, Azerbaijan’s cautious rapprochement with Iran could still easily careen off the tracks. A major irritant in Azerbaijani-Iranian relations is still present, specifically Baku’s strong strategic ties with Israel, which is adamantly opposed to the Iranian nuclear deal. If relations do sour, Tehran might be tempted to use Azeri Islamists proxies to stir up trouble for Azerbaijan.

There are some important factors that militate against the growth of Islamist influence in Azerbaijan – at least in the short term. First and foremost, Azerbaijanis genuinely value stability. Memories of the chaos and misery of the early 1990s – a time of unprecedented political activism, economic upheaval and a disastrous war against Armenia over control of the Nagorno-Karabakh enclave – linger in the back of most adults’ minds. These memories are reinforced by the current images of violence and destruction coming out of Ukraine, Syria, Libya, Yemen and Iraq. In addition, with so many preoccupied with economic issues, Azerbaijanis tend to be politically apathetic, something underscored by the general absence of a public outcry against the recent arrests of civic and political activists. It is telling that on the day when the trial of Leyla and Arif Yunus began, a group of young Azerbaijanis paraded in Baku to defend their right to wear shorts.

In the near term, the deep desire for stability, combined with broad public apathy, limits the chances of any form of radical change taking place in Azerbaijan. However, persistent corruption, social injustice, cultural alienation and the lack of avenues for expressing peaceful and loyal dissent means the Aliyev administration likely will continue to face big social and political challenges. Given the lack of convincing secularist alternatives, along with a potentially major change in the region’s geopolitical context, Azerbaijan’s Islamists seem now well positioned to eventually emerge as a leading voice for political change in the country.