Who really is Kazakhstan’s leader of the nation?

The consensus among Kazakhstan watchers is that the former president is trying to contain his successor. 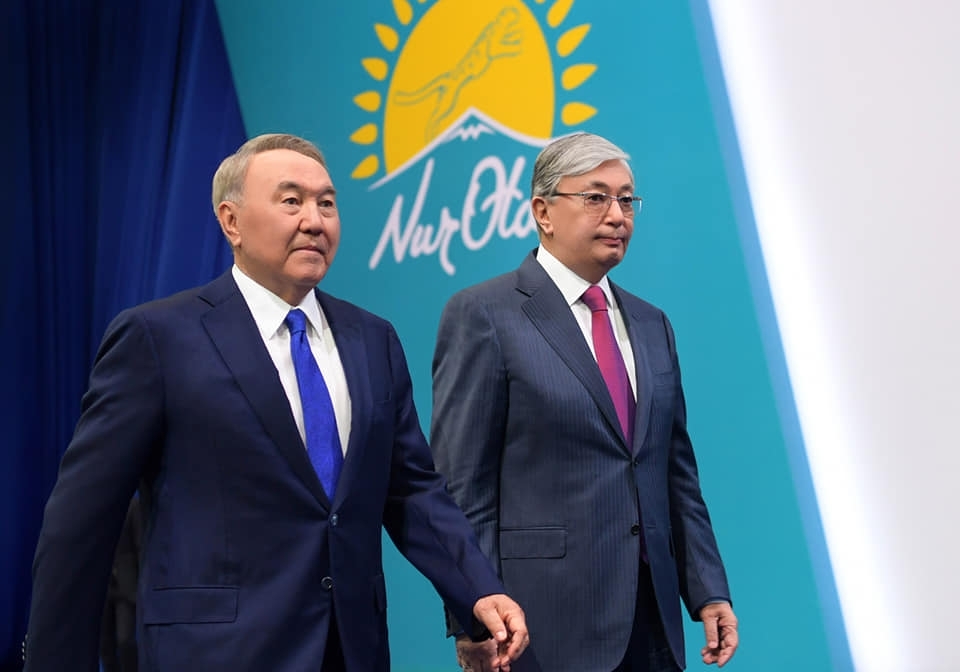 Who’s got the power? (Akorda.kz)

In an interview earlier this month, Kazakhstan’s former President Nursultan Nazarbayev tried to strike a pose as a man of leisure.

These days, he spends his time reading classic literature and painting. He’s even planning an exhibition.

All this chatter that he is secretly running the country in tandem with his anointed successor, Kassym-Jomart Tokayev, or even worse, that there is infighting among the old and new guard, is just dross concocted by troublemakers, he assured state television in an interview aired on October 11.

Any skeptics inclined to think Nazarbayev was dissembling now appear to have been amply vindicated.

On October 9, two days before Nazarbayev's interview, Tokayev had signed off on a decree that will severely constrain his scope for independent action. According to that document, whose existence only came to light 12 days after it was approved, Nazarbayev has been handed a veto over key political and security appointments.

“More than half a year after Nazarbayev’s resignation, the unexpected new legislation illustrates that … the transition has not gone to plan so far and requires constant readjustments to curtail Tokayev’s authority,” Kate Mallinson, managing director of London-based consultancy Prism Political Risk Management, told Eurasianet.

This new set-up constitutes a major rewrite of the rules that took effect in March, when Nazarbayev resigned, ending his three-decade-long rule, and handed the reins to Tokayev.

In his capacity of Leader of the Nation, a bespoke title created in 2010, Nazarbayev retained the right to continue influencing policymaking in important ways. Nazarbayev is also lifetime chairman of the Security Council, the body that oversees all the nation’s security bodies.

In recent weeks, it has seemingly been determined that was not enough. The chair of the Security Council must now be consulted before the president is permitted to appoint all but a few top officials.

Tokayev has ceded his right to unilaterally appoint most cabinet ministers, heads of various security forces, as well as regional governors and city mayors. He can still appoint three ministers without deferring to Nazarbayev: defense, internal affairs and foreign affairs.

That leaves the National Security Committee, the powerful security services body known as the KNB, the foreign intelligence service, the Prosecutor-General’s Office and the central bank within the former president’s sphere of influence. Tokayev is even required to consult Nazarbayev over the appointment of the head of his own security detail.

The decree contains a clause theoretically allowing the president to bypass the consultation procedure. But given the current balance of power, it seems unlikely that Tokayev would defy Nazarbayev by failing to consult him.

The consensus among Kazakhstan watchers is that Nazarbayev and his entourage are trying to contain Tokayev.

“With the resignation of Nazarbayev, Kazakhstan moved from a personalist regime to a more oligarchic system, in which Tokayev can only exert the amount of power he is allowed by the group of cadres operating in the background,” said Luca Anceschi, lecturer in Central Asian Studies at the University of Glasgow.

It is unclear what precipitated this rearrangement of the furniture, but there are some glaring clues.

Tokayev has recently been outspoken over matters close to Nazarbayev’s heart. He lambasted the state of Nur-Sultan, the capital city that was Nazarbayev’s brainchild and bears his name. While doing so, he ordered the broadening of a probe into allegations of corruption in a light railway construction project.

This episode was read in some quarters as a sign of strain in relations between the presidential administration and Nazarbayev’s entourage, who are collectively nicknamed “the Library,” as they work out of the First President’s Library.

Now, Tokayev must “run to the Library” to get permission to make appointments, preventing him from forming his own powerbase, political analysis website Exclusive.kz noted in an editorial comment.

Exclusive.kz was one of only a handful of outlets to break a media blackout on the October 9 decree, which has not been published on the presidential website.

Analysts see the KNB and its chairman, Karim Masimov, as the main players in this drama.

“The powerful KNB and security agencies will play the roles of ‘kingmakers’ in the next phase of the transition,” said Mallinson.

Another possibility is that pledges by Tokayev to implement political and economic reforms may be ruffling the feathers of a hawkish old guard.

For Mallinson, the act of tying Tokayev’s hands “makes a mockery” of any reform agenda.

Even if the transition process is being revisited at elite level, changes at the popular level will be harder to manipulate, however.

“Unless Tokayev is removed – and I don't see how that can be done in the near future – he will continue to build his own legitimacy, which can be done only through addressing problems that accumulated in the country. And it seems to me we have a consensus on how considerable the scale and acuteness of these problems is,” she told Eurasianet in emailed remarks.

Dosym Satpayev, an Almaty-based analyst who has made elite-watching his stock-in-trade, said that the decree confirms for him that Kazakhstan is at most going through a “semi-transition.”

“While the first president is living, the second president is surrounded not only by multiple red flags, but also by concrete barriers, including over appointments of cadres,” he wrote on Facebook.

With these developments, reading the tealeaves about succession is again in vogue, if it ever really went away.

Dariga Nazarbayeva was appointed chair of the Senate days after her father resigned as president. That position means she would take over if Tokayev were ever to resign or become incapacitated.

Mallinson said that this suggests “the presidency will ultimately return to the Nazarbayev family, in some shape.”

Officials shrugged off the buzz of commentary around this issue.

This was a “routine” matter, said Tokayev’s spokesman, Berik Uali, as he denied that his boss had ceded any powers.

Justice Minister Marat Beketayev perhaps said more than he intended when he sought to downplay the clamor by likening Kazakhstan to other nations where top officials are appointed following coordination among different branches of government.

“In constitutional monarchies, the practice is such that coordinated agreement is a formality,” he was reported as saying.

Exclusive.kz was less forgiving in addressing the question about whether Tokayev had been stripped of power.

“The answer is not comforting, gentlemen: this is a coup.”