Why Georgians second-guess their doctors

Deregulation has left Georgian medical care something many Georgians would rather avoid. 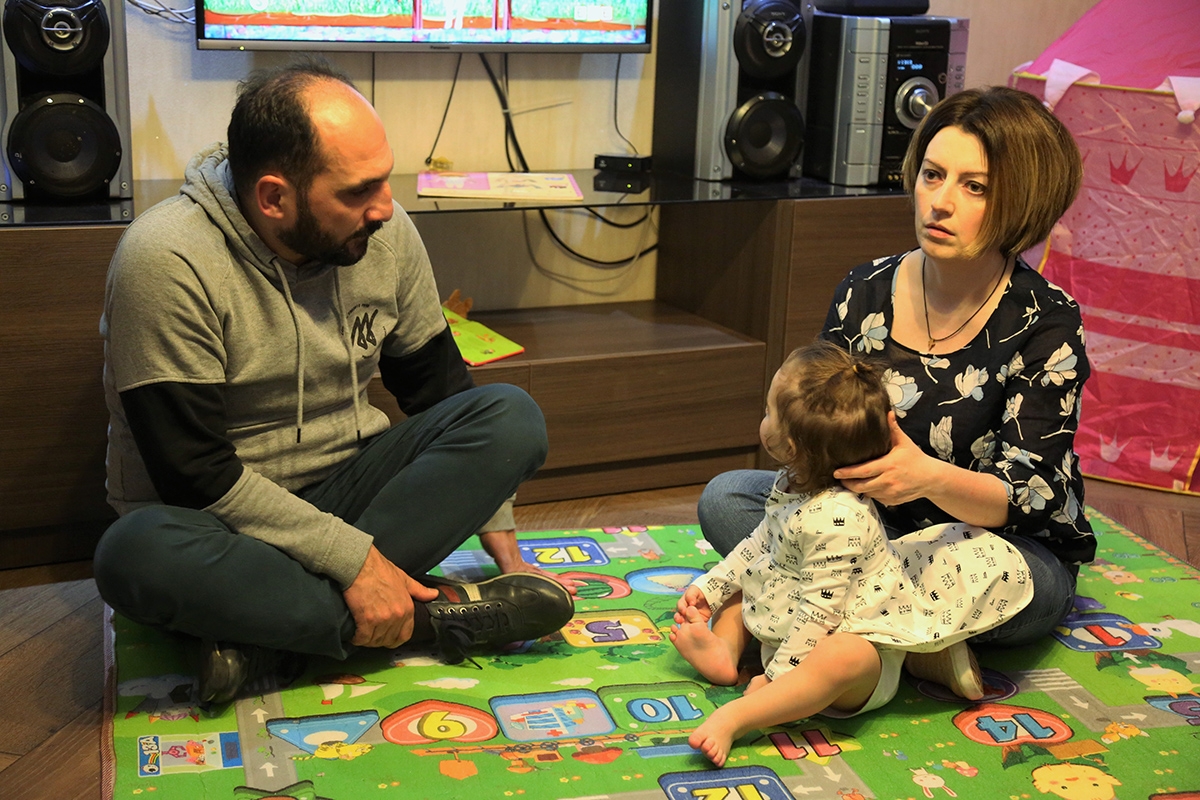 Kira and her parents. (Photo by Giorgi Lomsadze)

Veranika Ebralidze, a stay-at-home mother of two from Tbilisi, took a deep breath to process what the doctor had just told her. Her younger daughter, one-year-old Kira, had a massive tumor in her left abdomen, according to an ultrasound scan. From that moment, events developed at a dizzying pace.

Clutching her baby and the test results, Ebralidze sped to her family pediatrician, thoughts racing through her head. “It all made sense in retrospect: the recurrent fever, the diarrhea, all the little things I did not make much of before,” she recalled.

There was a chance that the thing inside Kira was not a problem. The pediatrician described a few alternative explanations and said that additional tests, like magnetic resonance imaging (MRI), were needed to take a better look. He mentioned that clinics in neighboring Turkey have more sophisticated diagnostic equipment.

Ebralidze’s husband, Paata Sharikadze, wasn’t taking any chances. He took a leave from his job as an analyst at a private bank and booked the first flight to Istanbul.

Georgians widely regard their country’s medical care as subpar. And when they have the means or can borrow from friends and family, they often go to Turkey to treat life-threatening diseases like cancer. They also go for second opinions. Turkey offers advanced and, compared to the European Union, relatively affordable medical services. As one Tbilisi doctor told Eurasianet, “Turkey is now Georgia’s intensive care unit.”

The two-and-a-half hour flight to Istanbul seemed endless. “I was holding my daughter in my hands, thinking what if something happens to her now, while we are in the air. We wouldn’t be able to do anything,” Sharikadze said.

Back in Tbilisi, family and friends were on tenterhooks, praying and checking for updates. Sharikadze’s workmates went around their office to raise money to help him pay the pending medical bills. Georgians commonly turn to crowdfunding to help the gravely ill undergo treatment in Turkey. A government fund also sponsors Georgians’ treatment abroad, especially minors with acute oncological conditions, mostly in Turkey.

The next day, Ebralidze, sleepless and running on fumes, watched a doctor in Istanbul’s Liv Hospital inspect her daughter with an ultrasound. She was gripped by alarm when the doctor called a few colleagues to take a look.

Then, to her amazement, everyone began laughing.

Barely containing themselves, the doctors turned to her to say, through an interpreter, that the mysterious thing in Kira’s belly was, “A spleen?!” Ebralidze repeated. Yes, the amused doctors said, and not even an enlarged one for that matter. “They asked me where we came from. When I said Georgia they just went rolling with laughter,” Ebralidze recalled.

Incredulous that a well-known Georgian sonographer could not recognize a internal organ, Ebralidze and Sharikadze took their daughter to another Istanbul clinic, the Acibadem International Hospital. There, again, Kira was diagnosed with having a spleen.

Kira’s case adds to the litany of complaints about medical errors in Georgia. Indeed, it’s common to hear of Georgians returning from a medical examination abroad having realized they had been misdiagnosed at home.

Last year, Giorgi Tsiklauri, 24, was diagnosed with leukemia at a hospital in Tbilisi and was about to undergo chemotherapy, but he decided to seek a second opinion in Turkey. As it turned out, he had an infection on the inner surface of his heart, Tsiklauri told local media, publicly accusing his Georgian doctor of incompetence.

Of course, doctors can make mistakes in even the most-developed countries. A 2017 study by researchers at Johns Hopkins University School of Medicine found that medical error ranks as the third-leading cause of death in the United States.

But the statistics suggest Georgia has a large number of poorly regulated doctors.

Last year, the Georgian government suspended 93 doctors’ licenses, mostly for malpractice, according to Nino Khutsishvili of the State Agency for Regulating Medical Activity. By comparison, the state of California, which has 10 times the population and five times the doctors, revoked 44 medical licenses on similar grounds.

Lapses in education and deregulation may, at least partly, explain the frequency of medical errors, suggests Giorgi Gotsadze, the president of the Curatio International Foundation, a healthcare think-tank based in Tbilisi.

“Medicine is a constantly evolving field and lifelong learning is needed to stay abreast of [changes]. In Georgia, physicians are not required by the state to keep upgrading their professional skills,” Gotsadze explained.

In a 2017 report for the World Health Organization, Curatio emphasized the risks of deregulation and the privatization of state medical facilities.

"In 2006, the government of Georgia introduced an aggressive privatization policy and applied market-regulated principles to the health sector, characterized by liberal regulations and minimum supervision. In the framework of this policy many regulations were abolished, and medical facilities and quality of services were no longer controlled by the state,” the report said. Today, “there are no regulations to appraise service providers’ clinical practice.”

Even if patients ultimately escape a poorly trained doctor unharmed, many are averse to go through with the drudgery of pressing administrative and legal charges. Dentist Nino Kopadze was content to simply tell off the doctor who mistakenly diagnosed her with stomach cancer. “I did not have the stamina to follow through with filing a complaint and all that, though I should have,” she told Eurasianet.

The man who did the original ultrasound test on Kira publicly admitted his mistake. “I am of course now convinced that I made a mistake and that there was nothing there. And I have no problem apologizing for it,” the diagnostic sonographer at Interclinic said on television. (Interclinic declined to be interviewed in a reasonable timeframe for this story.) Kira’s parents are now deciding whether to accept the apology or to press for compensation for the costs and stress they suffered.