Why is Armenia angry?

A new poll finds that Armenians exhibit the greatest prevalence of anger in the world, and are far more peeved than their Caucasus neighbors. 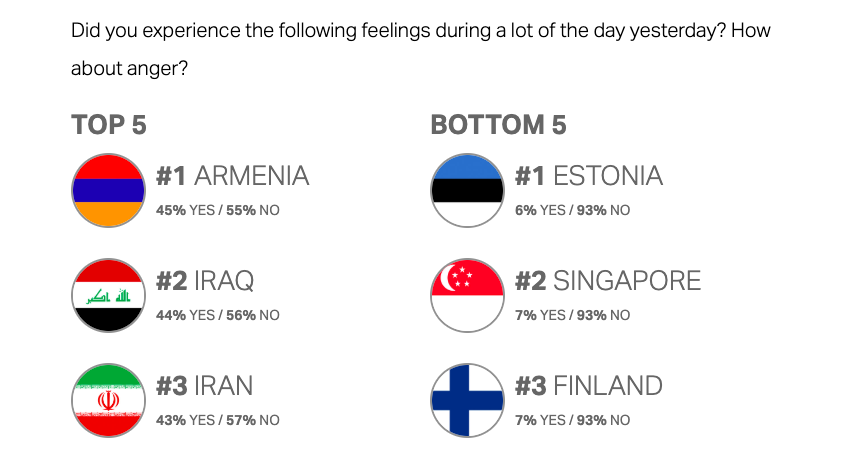 The world is an increasingly angry place and Armenia is the angriest place of all, a recent survey of international emotions found.

Fully 45 percent of Armenian respondents – the highest national percentage anywhere in the world – said that they had been angry in the past day. To Armenia’s north, in Georgia, the positive response rate was 27 percent, while the moneyed neighbor to the east, Azerbaijan, is the calmest in the Caucasus region, with only 18 percent reporting having been angry recently.

Nearby Iraq and Iran are nearly as angry, respectively coming second (44 percent) and third (43 percent) on the global ire chart.

The poll offers little explanation for the Armenian chagrin, which may seem surprising to an outsider. The last time the world turned its gaze toward Armenia, people were having the time of their lives there, dancing and making kebabs to celebrate the overthrow of their hated longtime leader, Serzh Sargsyan. But even Sargsyan was not averse to a little dance, and neither is the man who brought him down, Prime Minister Nikol Pashinyan.

Since the revolution, Armenia has been the most dynamic place in the Caucasus. Meanwhile, Georgia appears to be in a rut by comparison, while Azerbaijan has been politically and economically stagnant for years.

One famous syncopated depiction of peculiarities of national characters in the Caucasus, a performance by an Armenian musician in a restaurant that became a minor viral hit, depicts Armenia being more prone to drama than Georgia and Azerbaijan.

Gallup also found that the stress level is fairly low in Armenia, though not the most stress-free in the former Soviet world. That honor goes to Turkmenistan, which also happens to be the least free country in the region, so perhaps residents don’t have a choice.

The world’s most stressed country is Greece, and some half-jokingly blamed the Armenian anger and Greek stress on the country in between, Turkey, which has long-running disputes with both neighbors. (Though Turkey itself is fairly stressed out, Gallup found.)

Being sandwiched between two enemies, Turkey and Azerbaijan, probably does not make Armenia particularly happy, but, geopolitics aside, Armenians might be ticked off partly because they are not getting enough rest. The nation is among the three least well-rested countries in the world, the Gallup poll found. The poll also found Armenia to be the Nervous Nelly of the post-Soviet space, as measured by level of worry expressed by respondents. The Central Asian countries appear to be the most carefree in the region.

The world’s calmest nation also is a former Soviet republic: Estonia. This might offer grist for common Russian jokes that portray Estonians as phlegmatic and slow – “only Estonians can spend hours in the zoo watching sloths frolic and dart around” – but Estonia gets the last laugh as it ranks as the wealthiest (per capita) and the most democratic country to come out of the Soviet Union, far ahead of Russia on both counts.

Some questioned the poll’s findings, saying that some nations are more open about their emotions than others and that the word “anger” has different connotations in different languages. One case in point: the question “how are you?,” which is mainly a ritual greeting in English followed by a mechanical “great” or “good,” while in places like the Caucasus it is a genuine question that could result in an honest response about family, job or digestion-related problems.

One analysis, by Armenian economist Hrant Mikaelian sought explanations in other, past surveys. One Gallup poll published in 2017 showed that Armenia was among the top 10 countries that citizens wanted to leave, with all Armenia’s neighbors feeling far less a yen to emigrate. A 2013 poll rated Armenia as the most Soviet nostalgic among former members of the Union, with 66 percent of interviewees saying that the breakup of the USSR brought more harm than good. (Azerbaijan and Georgia leaned toward “good,” though by tight margins.)

Mikaelian also tied his country’s unhappiness to its poor economy – Armenia has the lowest per capita GDP in the Caucasus and one of the lowest in the post-Soviet space – and relative deprivation, the gap between the expected quality of life and reality.

Whatever confluence of factors may be ultimately at play, be it cultural relativism, political instability, or economic insecurity, Armenia’s new, revolutionary government has a lot of work to do if it wants to keep all that anger in check.