Will Georgia’s Parliamentary Vote Clear the “Free and Fair” Hurdle? 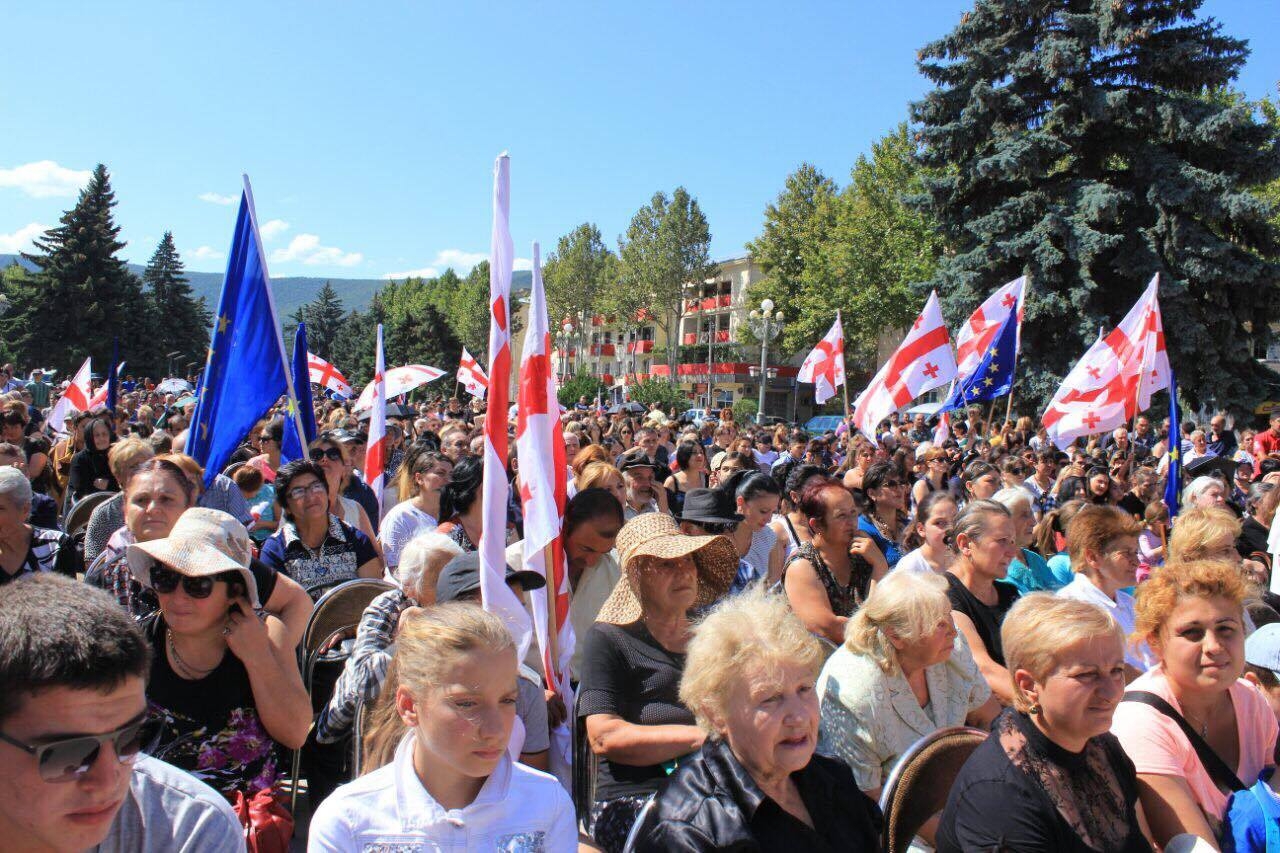 A rally organized by the United National Movement, Georgia’s largest opposition party, in Gori in early September. As Georgian voters prepare for a parliamentary election on October 8, various irregularities – among them, coup-plot allegations and the explosion of an opposition politician’s car – suggest that democratic practices in Georgia still leave much to be desired. (Photo: United National Movement)

As Georgian voters prepare for a parliamentary election on October 8, various irregularities – among them, coup-plot allegations and the explosion of an opposition politician’s car – suggest that democratic practices in Georgia still leave much to be desired.

A clean and peaceful election could reinforce Georgia’s credentials for membership in the European Union and North Atlantic Treaty Organization, its two long-term goals. And so far, analysts generally agree that, compared with 2012, when former President Mikheil Saakashvili’s United National Movement (UNM) was in power, this campaign season has improved. The government, now run by the Georgian Dream-Democratic Georgia, has not hindered opposition access to broadcast media (though some insist they tried and news outlets still play political favorites) nor imposed administrative or financial restraints on opposition candidates.

Yet, as in elections past, the struggle for control of the country’s 150-seat legislature has been far short of calm.

On October 4, a prominent parliamentarian, Givi Targamadze, for the UNM, now the country’s largest opposition party, survived an apparent car bombing in the capital, Tbilisi.

The UNM described the attack as a premeditated act of terror and the result of a “climate of hate” supposedly created by the Georgian Dream government. The authorities promised a swift investigation of the blast, but some Georgian Dream members insinuated that the UNM staged the explosion to rally voters against the government.

Until this incident, violence and intimidation had appeared to be on the wane, the International Society for Fair Elections and Democracy (ISFED) reported. It observed about a dozen instances of campaign-related violence between July and October, including the use of gunfire at one rally for an opposition candidate. A suspect has been arrested.

Nonetheless, “[t]here is a heavy dose of mistrust among parties in law-enforcement institutions to address these cases with the full rigor of the law,” said the local ISFED executive director, Mikheil Benidze.

Apparent eavesdropping on the government’s political opponents, long characteristic of Georgian elections, has added to that sense of unease. Just weeks before the October 8 vote, wiretapped conversations posted on YouTube implicated the UNM and its de facto leader, Saakashvili, now a regional Ukrainian governor, in plans to overthrow the government should the Georgian Dream win the election.

Saakashvili and his alleged UNM interlocutors charged that the Georgian security services had doctored the conversations at the behest of the Georgian Dream and billionaire businessman Bidzina Ivanishvili, seen as the government’s grey cardinal. Similar recordings appeared last year amid a court fight over the ownership of Rustavi2, the country’s largest TV station and an openly pro-UNM outlet.

Government officials deny any wrongdoing. In both cases, though, it stands accused of taking a page from the UNM’s playbook. Back in 2012, a volley of wiretaps revealed senior Georgian Dream coalition members allegedly making unflattering comments about the coalition’s founder, Ivanishvili.

The broadcast of such recordings has long created a sense of living in an Orwellian world of omnipresent snooping. “It is outrageous that another election campaign goes on against a backdrop of wiretapped recordings and that illegal surveillance/eavesdropping and dissemination of its results has reached systematic proportions,” a coalition of rights organizations called This Affects You: They Are Listening to Us complained in a statement.

The authenticity of all these tapes is disputed, but the recordings – like the 2012-election videos purporting to show abuse of prisoners – tend to torpedo civil discourse on policy issues. As a result, “programmatic debate recedes to the backdrop and the political actors engage in mud-slinging instead of connecting to the voters,” commented ISFED’s Benidze.

But less dramatic challenges to a fair election exist as well.

Georgian law sets a cap on campaign donations at 60,000 lari (about $25,800) for individual donors and twice that amount for organizations or companies. But just ahead of the elections, a private bank founded by Ivanishvili got around that by giving the Georgian Dream a one-million-lari ($429,867), four-month loan.

“They must have hit a snag and had to borrow the money,” remarked Ivanishvili to reporters on September 29. He claimed no previous knowledge of the transaction.

Other parties may not have that kind of financial backing, but have attempted to secure voter loyalty among society’s poorest stratum, according to ISFED.

The anti-corruption watchdog Transparency International Georgia has reported that in almost every region “employees of state-funded institutions have been mobilized to attend campaign events” for the Georgian Dream.

The party’s executive secretary, Irakli Kobakhidze, promised officials will look into these cases, but stressed that the abuse of administrative resources is less frequent than in 2012 – a claim with which some observers agree.

Election day itself, however, presents one more hurdle to a free and fair vote.

In a 2015 redesign of Georgia’s election districts, some single-mandate districts where the Georgian Dream lost races in 2012 were “systematically” merged with districts where the ruling party’s candidates had prevailed, the Caucasus Research Resource Centers (CRRC) found in an August 9 report. In several cases, this resulted in districts made up of non-contiguous parts.

While the CRRC considers that the redistricting generally reflected actual population distribution, David Sichinava, a former senior CRRC researcher who mapped the new districts, noted that “Had the current election map been in place in 2012, the Georgian Dream would have nine more parliament members.”

The Georgian Dream did not respond to emailed questions about redistricting in time for publication.

Even once the polls have closed, however, the controversy may not end.

Both the UNM and the Patriots’ Alliance, a coalition of five conservative mini-parties, have pledged night-time demonstrations in downtown Tbilisi if the preliminary vote results do not tally with their preferred exit poll or expectations.