Will Kazakhstan’s giveaway solve debt disease or postpone it?

The relief may only be temporary, since those in most trouble are never far away from another cycle of debt. 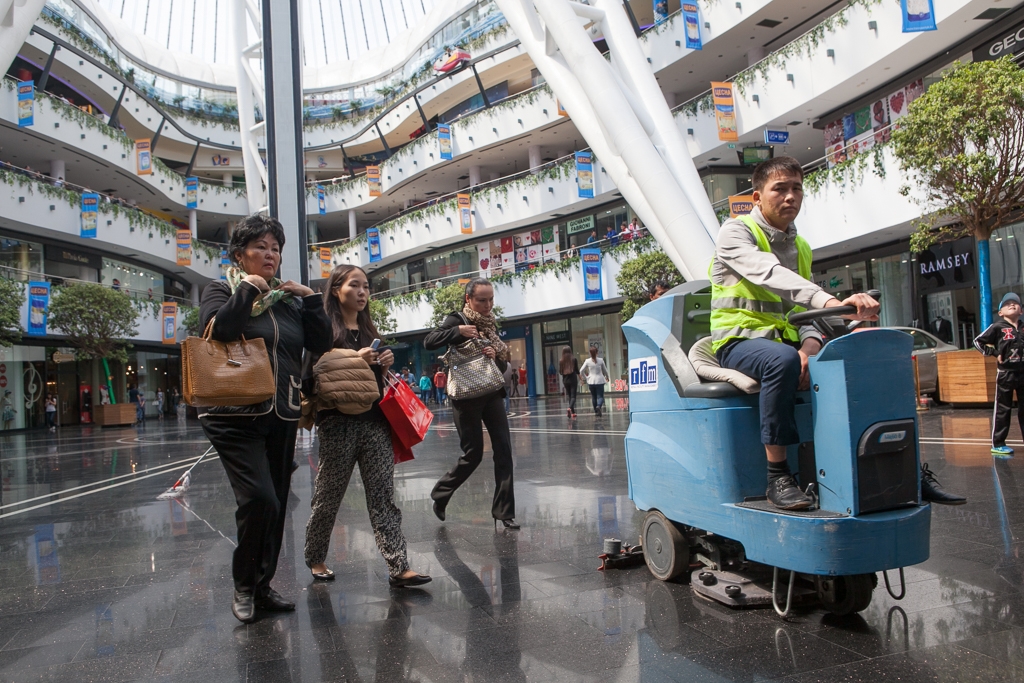 Costly and relatively small loans are most often taken out to pay for items like clothes, shoes and electronics. (Eurasianet photo)

And just like that, one quarter of a million people in Kazakhstan are getting their debts wiped clean.

Under a government program adopted earlier this year, banks are this month writing off penalties for overdue loans held by hard-up families. By the fall, the debts themselves will be forgiven.

This is a huge lifeline for people like Anara Ryskulova, a mother of four small children from the town of Kaskelen, just west of the business capital, Almaty. Ryskulova works two jobs and makes $400 a month. She often has to fall back on credit to pay for rent, clothing and medicine.

But the relief may only be temporary, since those in most trouble, like Ryskulova, are never far away from another cycle of debt.

"It's time to get my kids to school and there's no money, so at least I can take out a loan," she told Eurasianet.

The giveaway was approved in a June 26 decree from President Kassym-Jomart Tokayev, who is aiming to lighten the debt burden among especially vulnerable sections of the population. Consumer debts up to $800 will be wiped off in whole. Amounts over that will have $800 knocked off. As Tokayev told Bloomberg news shortly after approving the measure, the initiative should cover 3 million people in total – one-fifth of Kazakhstan’s population.

Tokayev’s motivations were primarily political. Kazakhstan has been experiencing unusual levels of activism from a public tired of unaccountability and stagnation in the real economy. Authorities appear especially spooked by the vocal grumbling from loose groupings of activists representing mothers. The government has long been able to cast opposition figures as power-hungry troublemakers, but that line works less well with the impoverished matriarchs of large families.

Debt forgiveness has received mixed reviews, however. Some are indignant that they have for years made conscientious efforts to manage their liabilities, only for others to suddenly benefit from a windfall.

Kurmet Zhakipov, a resident of Almaty, told Eurasianet that he believes this will simply generate a greater culture of irresponsibility.

“Many people will start thinking: Why not take out a loan for a new smartphone and not pay it back, since the government is going to pick up the bill anyhow,” Zhakipov told Eurasianet.

Bad credit is one of the most enduring headaches of Kazakhstan’s lending system. According to National Bank data from July, around 10 percent of people holding consumers loans have debts overdue by more than one month. By other estimates, the problem may be many times worse.

Most often, people take out unsecured consumer loans, for which the rate of annual interest tends to be 20 percent at the very least. First Credit Bureau, a credit history database, estimates that these kinds of loans account for more than half of consumer lenders’ loan portfolios.

Costly and relatively small loans are most often taken out to pay for items like clothes, shoes and electronics, according to bankers contacted by Eurasianet.

Ryskulova said that she used to go to the bazaar on the outskirts of town to find cheap clothes, but she has now become a habitué of shopping centers, where she uses her credit card to make purchases.

“It turns out a little more expensive, but you don’t need money to get what you need. You don’t need to wait and save up. It is very convenient,” she said.

And then there is the partying.

In July, the chairman of the National Bank, Yerbolat Dosayev, told a gathering of lawmakers that official figures show that around 10 percent of the easily issued loans are spent on one-off events.

Weddings in Kazakhstan are traditionally lavish affairs, even for those who can barely afford it. People earning a few hundred dollars a monthly are in some cases prepared to blow thousands – maybe tens of thousands – on a huge bash, or toi, as it is known in Kazakh. Failure to do so could mean loss of face. Meeting that demand, some local banks offer tailored loans of up to $15,000 at 15 percent interest without requiring collateral.

Banks are just the tip of the iceberg. Online lenders operate in a shadier area than banks and have become hugely popular.

Online lenders are not fussy about credit histories and solvency. After filling an online form, borrowers can expect to get a deposit on their account within minutes. But the price of convenience is high. Rates can exceed those offered by banks many times over, despite the National Bank cap of 100 percent per annum interest. Restrictions are circumvented by means of fanciful interpretations of the law, which the lenders argue puts them outside the purview of the National Bank.

National Bank Deputy Chairman Oleg Smolyakov said in June that the volume of debt issued to consumers by online companies and pawnshops is growing twice as fast as what banks are giving out.

Anna Smirnova, an Almaty resident, is suing several online companies who insist that she still owes them money despite her paying back the principle and very substantial interest. Smirnova concedes she agreed to the terms, but that the conditions were in violation of Kazakhstan law.

“There was one company alone where I was charged 1,000 percent per annum, factoring interest and late fees,” she told Eurasianet. “I have several such online debts and no way to settle.”

Smirnova said that the insistent behavior of debt collectors, who repeatedly visited her home and workplace, caused her to lose her job. She may be one of the lucky ones though. She has won two of her legal battles and clawed back some of the excess debt repayments.

Gulmira Ileuova, director of the Strategia think tank, said that consumer loans in Kazakhstan are a millstone around the necks of the poor.

“When express loans began to spread in the country in 2005, villagers rejoiced that life had finally begun to improve,” she told Eurasianet. “They perceive credit as a magic tool for fulfilling their wishes.”

This era of easy credit maybe coming to close, however. While embarking on the handout, Tokayev also approved measures severely tightening rules for issuing loans. Lenders are to be required to engage in a far more thorough assessment of the solvency of applicants. Loans will no longer be issued to citizens with monthly incomes below the subsistence level ($77). Those with outstanding loans overdue by more than 60 days will also not be eligible.

The National Bank is also moving to close loopholes exploited by online lenders and pawnshops, requiring them to register by July 2020.

Aliya Adambayeva, a National Bank spokeswoman, told Eurasianet that the new law will increase the transparency of the lending market and reduce risks for both financial institutions and borrowers.

“Online companies and pawnshops will be required to comply with new lending requirements. And the National Bank will have complete information about the debt burden of citizens,” she said.

Ilueova of Strategia said that a policy aimed at foreclosing lending to the poor is draconian, but maybe necessary.

“If the borrowers cannot take responsibility, then somebody will have to do it for them,” she said.