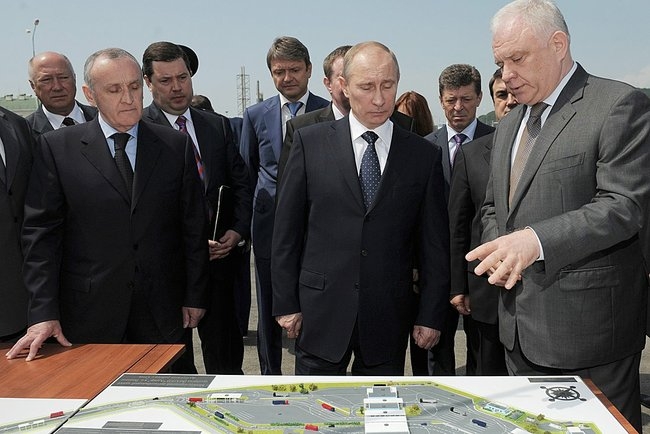 The upcoming Winter Olympics in Sochi, Russia, are an event of enormous symbolic importance for the Russian government and President Vladimir Putin. So any sort of attack on the games -- like the one that Chechen Islamist leade Doku Umarov recenrly called for -- would come as a huge blow to Russia.

So in that regard, it's interesting that Putin has reached out to Georgia to propose some sort of cooperation on security for the Olympics, which will be held just five miles from the border of the Georgian breakaway region of Abkhazia. Putin was recently asked about Georgian help regarding Olympic security:

“Of course, we are absolutely ready for such help,” Putin said, when asked whether a Georgian security contribution would be accepted.

“We want to repair our relationships. We have a very warm attitude to Georgia. We are very close peoples."

He did not specify whether such help could include Georgian police on the ground.

And Georgian Prime Minister Bidzina Ivanishvili responded positively, saying that “The Georgian side will provide maximum assistance; we should ensure that no incident takes place during the Olympics."

What might the form of this competition take? It's not yet clear. Caucasus analyst Tom de Waal is skeptical that cooperation will amount to much. But Georgian Defense Minister Irakli Alasania said that the specifics would be worked out with Moscow soon.

But since taking office last fall, Ivanishvili's government has taken a number of steps to reverse some of the previous government's policies that had exacerbated tensions vis-a-vis the North Caucasus. It closed down PIK TV, the Russian-language television station that Georgia beamed into the North Caucasus and it promised not to boycott the Olympics. And it has stopped -- if such a thing had ever been started -- a secret Georgian government effort to train Chechen terror groups inside Georgia.

Anyway, while Georgia may not be able to contribute that much concrete to Sochi security, at least a few months where Georgia is not the problem in the Caucasus, but part of the solution seems like it could have significant ramifications for Georgia-Russian relations. One wonders if Georgia might try to use this period to try to take some aggressive steps toward European/NATO integration, during a time when its cooperation with Russia would blunt any objections that the Kremlin might otherwise raise.