Will the last person leaving Turkmenistan turn out the lights?

Officials in Ashgabat are seemingly oblivious to the irony of making people get into long lines. 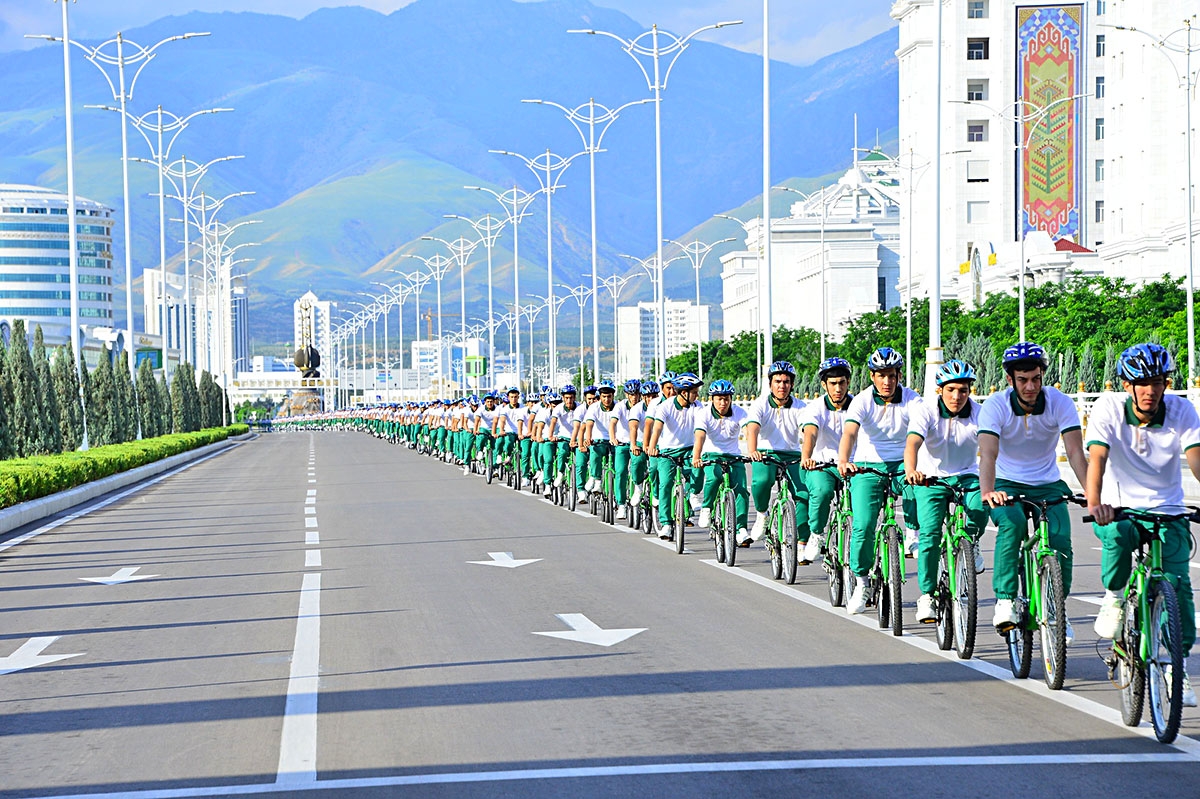 Turkmenistan: Long lines on bikes, and at grocery stores and gas stations. (http://tdh.gov.tm)

Turkmenistan sought another perch in the Guinness Book of World Records this week by arranging what it hopes was the longest-ever single file of bicycle riders.

The stunt was organized to mark World Cycling Day on June 3, which has become an all-consuming obsession for President Gurbanguly Berdymukhamedov. Last year, he corralled around 3,246 people into riding their bikes to set what was the described as a record-setting cycling lesson.

Officials in Ashgabat are seemingly oblivious to the irony of making people get into long lines. This is something Turkmens have become greatly used to. RFE/RL's Turkmen service, Azatlyk, reported again on the appearance of a number of queues outside stores selling state-subsidized foodstuffs. There have also been reports of long lines at gas stations in the capital.

The cycling-centered festivities have largely overshadowed preparations for the June 4 holiday marking the end of Ramadan, which is known locally as Oraz Bayramy. Not that authorities have been above meddling in religion. Azatlyk reported last month that imams have been ordered to invoke the president in their sermons.

Although Berdymukhamedov prefers racetracks and concert halls to praying, he is not a total stranger to the mosque. On May 31, he donated funds raised from the sales of his many books to the self-dedicated Gurbanguly-Hajji Mosque in the city of Mary.

Although religion does not feature prominently in official chronicles, attention is paid to the fact that Berdymukhamedov has performed the hajj. That he felt compelled to do this in 2016, however, might have been something to do with his relentless efforts to persuade the Saudis to part with cash on his Turkmenistan-Afghanistan-Pakistan-India, or TAPI, natural gas pipeline dream. If anything, the norm for Ashgabat in the past has been to prevent the devout from performing the pilgrimage. In 2014, Forum 18, a news service that reports on religious rights violations in the former Soviet Union, cited Saudi diplomatic officials as suggesting that the Turkmen government appeared to be actively hindering pilgrims from making the trip.

For the sources of this nervousness about Islam, one must only look next door to Afghanistan, which regularly provides a bulletin of bad news. On May 31, Afghan media reported that the Bala Murghab district of Afghanistan's Badghis province, which borders Turkmenistan, once again fell to the Taliban. Fighting in the area in March briefly forced a large number of Afghan forces over the border before Ashgabat forced them back, reportedly into the hands of the Taliban.

Turkmenistan’s relations with other neighbors near and far have been somewhat on the mend. On May 31, Ashgabat played host to a Commonwealth of Independent States heads of government summit. Berdymukhamedov, the only CIS leader to serve as both head of state and head of government, snubbed last September’s summit in Dushanbe, sending a deputy in his place. Tajikistan returned the favor, sending a deputy prime minister to the Ashgabat summit. Kyrgyzstan and Armenia also only sent their deputy prime ministers.

The absent premiers did not miss much. Berdymukhamedov recited some tired lines about the importance of mutual respect and cooperation. Seizing the opportunity, he also invited CIS members to get in on the TAPI action. The highlight of the summit was Berdymukhamedov’s decision to pick up Russian Prime Minister Dmitry Medvedev from his hotel in a vintage GAZ-21 Volga. The streets were cleared of traffic, so the pair did not have an opportunity to see the lines for which Turkmenistan is becoming famous.

Sergei Prikhodko, a senior Russian government official, hinted that a “medium-term” gas contract between Ashgabat and Moscow could be agreed and come into force as soon as the third quarter of this year.

The era of Russian-Turkmen gas swaps – a throwback to the 2000s – may be beckoning anew. One scenario envisioned in Ashgabat is for Turkmenistan to help Russia fill its 1,391-kilometer trans-Baltic Nord Stream 2 pipeline. As government-aligned news website Orient volunteered in April, “for Turkmenistan, it is not a problem to supply Russia” with half of Nord Stream 2’s capacity of 55 billion cubic meters.

A columnist writing in Russian state-run news service Sputnik argued that Moscow could notionally fill Nord Stream 2 with Turkmen gas to avoid Brussels injunctions against perceived monopolistic practices by Gazprom. Of course, the geography logically means that the actual fuel would unlikely be the Turkmen gas as such, which is where the swap mechanisms come in. The success of such a workaround would, from the Kremlin’s perspective, have the additional appeal of possibly torpedoing the prospects for a trans-Caspian pipeline, which is the only other way that Turkmen gas could feasibly reach Europe in large volumes.

Gas is not the only thing leaving Turkmenistan in large volumes.

Azatlyk claimed, in a very intriguing and significant piece of reporting, to have a source in the government telling it that almost 1.9 million people have left Turkmenistan over the past decade.

"According to classified information, which the State Statistics Committee has been collecting for a long time … in 2008-18, 1,879,413 people left to take up permanent residence [elsewhere] or for permanent work. This category almost never returns,” the broadcaster’s source said, adding that this number does not include people have who have left the country on a temporary basis.

Azatlyk said the figures have been confirmed by three sources in various government departments.

That timespan covers almost the entirety of Berdymukhamedov’s rule. What lends the report a certain credibility is that Turkmenistan has for decades stubbornly (and suspiciously) avoided carrying out a census. The fact that people are leaving in such large numbers is a stark indictment of people’s lack of belief in the future of the country.

Ruslan Myatiev, editor of Turkmen.news (previously known as the Alternative News of Turkmenistan), developed that theme further in an interview with Foreign Policy magazine. Myatiev lamented that "Soviet Turkmenistan was much, much more free than now.” While noting that even though the country came in last place in the Reporters Without Borders 2019 Press Freedom Index, his own site’s efforts to highlight the inhumanity of Turkmen prisons had still had some positive effect.

But the cost of stepping out of line can be immense, as evidenced by the continued imprisonment of independent reporter Gaspar Matalayev, who was recently honored with the International Labor Rights Forum's Organizing Award.