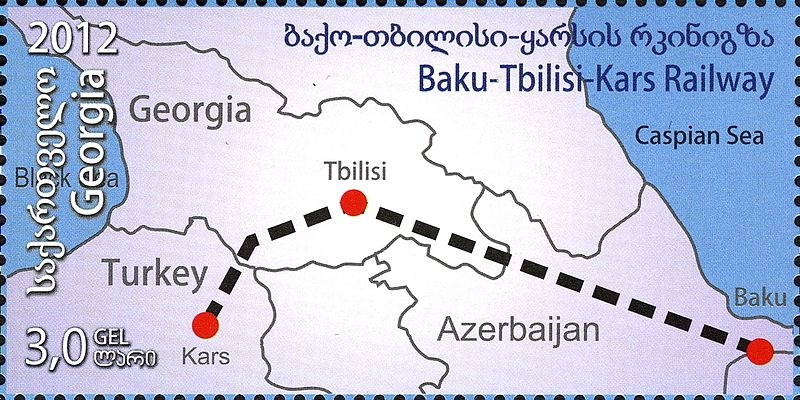 The new deadline for a new railway line that would connect the Caspian Sea to Turkey appears to be delayed yet again, making it highly unlikely that Georgia and Azerbaijan will profit much from U.S. military transportation business.

The presidents of Azerbaijan, Georgia, and Turkey met in Tbilisi on Wednesday, and the focus was "joint energy and transportation projects, among them Baku-Tbilisi-Kars railway." This is the railroad that last year the three countries had been promoting as the centerpiece of their proposal to gain a significant share of the "retrograde" transit of U.S. military equipment out of Afghanistan and back to Europe and the U.S. The idea would be to ship equipment through Central Asia, over the Caspian Sea, and through the South Caucasus. The railroad was "the vital missing link which will be operational soon," said Batu Kutelia, deputy secretary in the office of national security, said at the time. A senior Turkish official said the railroad would be operational by the end of 2013 and that "taking into consideration the reverse transit process, we wanted to accelerate the process."

This would be a geopolitical winner from the Pentagon's perspective, as it would decrease the U.S.'s reliance on the mercurial Pakistan and the new enemy, Russia. As an analyst at the Washington-based Heritage Foundation wrote this week:

Georgia has offered its territory, infrastructure, and logistic capabilities for the transit of NATO forces and cargo for Afghanistan. Georgia is modernizing key airports and port facilities in the country, and a major railway project is due to be completed later this year linking Azerbaijan to Turkey via Georgia. The transit route through Georgia provides one of the shortest and potentially most cost-effective routes and offers huge potential for NATO’s use as the Afghan withdrawal begins to increase. Most important, it would reduce NATO’s dependence on Russia for moving military resources in and out of Afghanistan.

But after the trilateral summit on Wednesday, Georgian Economy Minister, Giorgi Kvirikashvili said that "the railway is expected to be put into operation before the end of 2015," reports Civil.ge. That would seem way too late to get any substantial portion of the Northern Distribution Network business.

However, the military official in charge of the NDN said recently that the U.S.-Russia tensions haven't affected the NDN: "We have also continued to be able to move cargo through Russia, so we have not had any impact to the Northern Distribution Network through Russia with respect to the ongoing situation in Ukraine," General William Fraser, the commander of U.S. Transportation Command, told Defense News. That's good, since it looks like the U.S. is stuck with Russia a little while longer.