With capitalist ambition, a KGB museum opens in New York

The investors behind the project wish to remain anonymous. 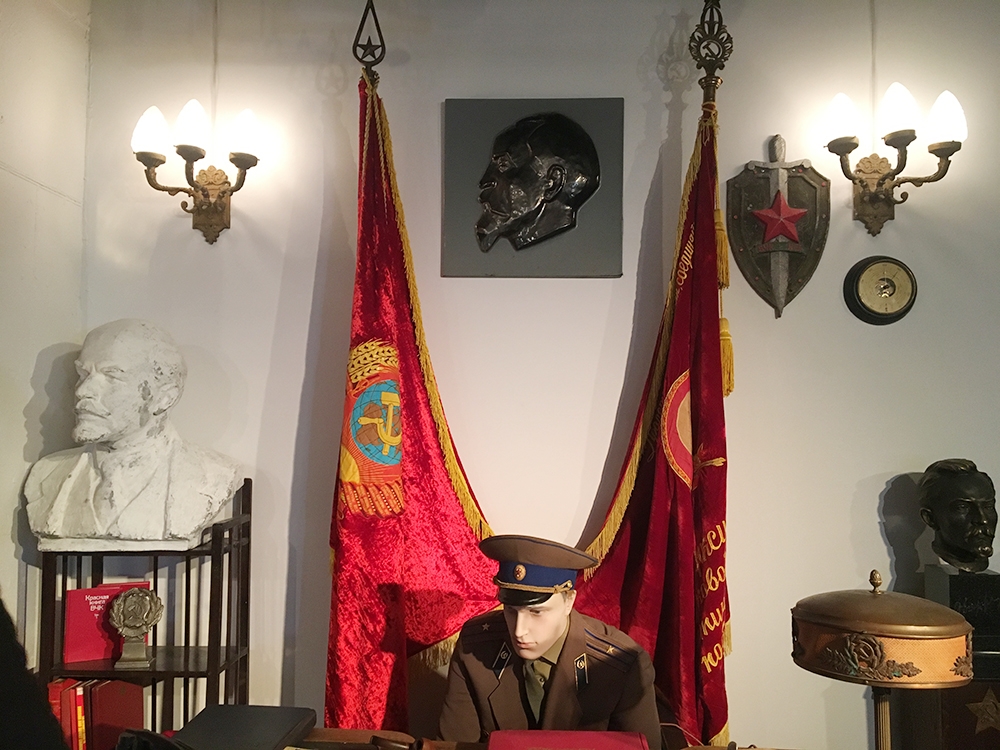 The KGB's New York debut. (All photos by Natasha Frid)

Any witness to the ongoing transformation of New York’s hip Meatpacking District is accustomed to surprises. But few expected a giant bust of Stalin when it appeared around Christmas.

The bust belongs to the KGB Espionage Museum, which opened on 14th Street earlier this year. Boasting over 3,500 objects, the for-profit gallery presents the gadgets, weapons and methods used by the Soviet secret police during the Cold War. The $25 admission fee includes a 90-minute guided tour.

The museum aims to be “apolitical,” to showcase the KGB without attempting to sway opinion on their legacy, said founder and curator Julius Urbaitis. Speaking over loud Soviet military music, the Lithuania-native explained, “We do not want to associate our museum with politics. We just tell the facts because you can never find a single truth. There are always two truths and two stories.”

As part of the experience, Urbaitis encourages visitors to don greatcoats and be photographed as KGB agents; or sit in a torture chair for questioning. There are games to assess whether you would be a “good KGB agent,” as guide Daniil explained to Eurasianet during a recent visit.

Panels narrate key moments in Soviet history, though one short biography of Vladimir Lenin describes him merely as “one of the most mysterious personalities of the 20th century” – an apparent attempt at balance that results in empty gibberish.

Indeed, not everyone finds the museum’s offbeat storytelling devices effective. Earlier this year, award-winning Russian-American journalist Masha Gessen reviewed the museum in the New Yorker and found it “blithely morally neutral.” She wrote that it “resembles a museum one might find in Russia itself – the country that has been ruled by a former KGB colonel for the past 19 years, a place where the KGB is not only glorified and romanticized but also simply normalized.”

Urbaitis, who collected many of the items himself, argues that his museum serves an educational function.

“We want to show the methods, the history, not only about the exhibits, but about the people who lived every day behind the wall and suffered. People were killed, sent to gulags, many were sent to the Lubyanka [prison] in Moscow,” Urbaitis, sporting a T-shirt featuring a matryoshka doll, told Eurasianet. “Lots of Russians come here [to the U.S.] who do not want to go back. Their children were born here and they want to show their children the history. The hair raises on their arms because there are a lot of emotions.”

Urbaitis, 55, claims that many of his artifacts could not freely be exhibited in Russia, insisting he could go to prison for such a museum there. Though that is most likely an exaggeration, it’s true that the Kremlin is not interested in freely discussing the KGB’s crimes. Last month Kommersant reported on how Gulag historian Sergei Prudovsky was barred from accessing secret police archives, where he had hoped to find information on a series of executions during Stalin’s Great Terror.

The museum is not the first offbeat venue capitalizing on Cold War kitsch in New York. Across lower Manhattan is the KGB Bar, a Soviet-themed literary venue and dive, complete with hammer-and-sickle paraphernalia and a “communist chic” aesthetic.

But, perhaps most intriguingly, how can Urbaitis afford this space? The Meatpacking District boasts retail rents of almost $500 a square foot. And the gallery was not bustling on a recent weekday visit.

Urbaitis says American investors who wish to remain anonymous are bankrolling the project. They learned of Urbaitis and his collection, he says, from his participation in exhibitions around the world. For his part, he hopes “the museum will make it into the top 20 most-popular museums in New York.”

His timing is fortuitous, with the news cycle dominated by talk of the U.S. president’s apparent fondness for Russia. But Urbaitis says he had no intention to piggyback on America’s frosty relations with Russia. When asked if the so-called “Russiagate” scandal had influenced his decision to open the museum, Urbaitis alleges indifference, claiming, “The Cold War never ended. Two great powers with great ambitions: there may always be a Cold War.”

Natasha Frid is a journalist based in New York.