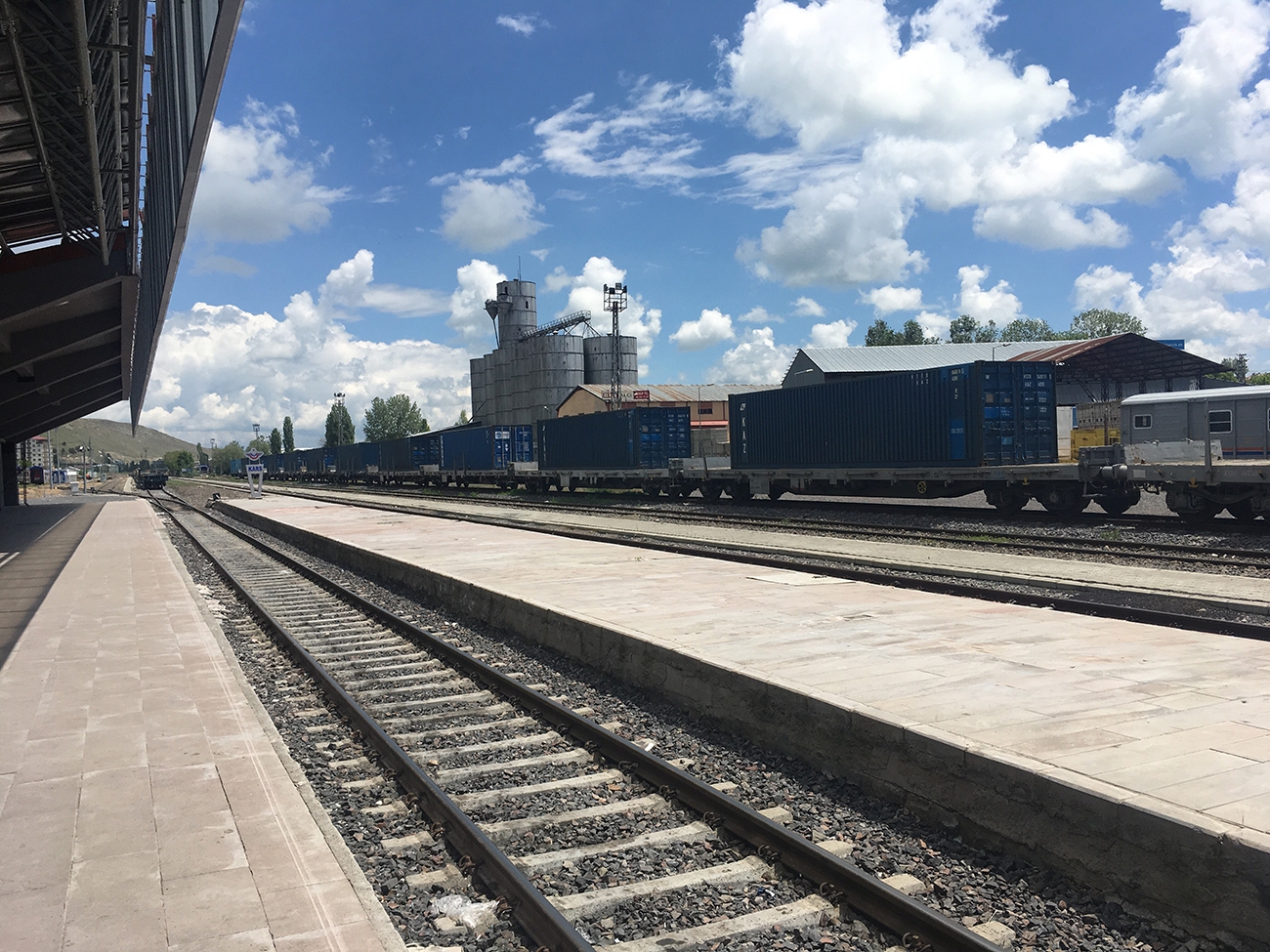 Kars railway station has become an important hub for freight being transported between Europe and Asia. (Photo: Bradley Jardine)

Kars, in far eastern Turkey, has a long history as a frontier, changing hands repeatedly between the Ottoman and Russian empires before becoming one of NATO's strategic outposts on the border of the Soviet Union.

Today, though, Kars is striving to be a connecting point rather than a dividing line, as hub for one of the region’s most ambitious infrastructure projects.

“We are planning [for Kars] to become a bridge connecting London and Beijing,” said Ahmet Arslan, Turkey’s Minister of Transport, Maritime Affairs and Communications in an interview with Eurasianet. “For us, the shortest route to realizing this vision is through the Caucasus.”

Since October 2017, the Baku-Tbilisi-Kars (BTK) Railway has been transporting goods between Kazakhstan and central Europe. In its current form, the railway is capable of carrying 6.6 million tons of freight each year, but planners are pushing to increase this to 50 million tons.

The railway was first proposed back in 1993, after Turkey and Azerbaijan closed their borders with Armenia as a result of the conflict over Nagorno-Karabakh. A quarter century later, the first trains are rolling along this 846-kilometer connector, transporting goods from London to China in as little as 15 days.

“Neither economics nor geopolitics sufficiently explain the scope of this project,” Arslan said. “We are aiming to boost our economy and integrate our regions in a way that benefits everyone.”

Fans of the project describe the South Caucasus as sitting at the center of an emerging Eurasian supercontinent – a market accounting for 65 percent of the world’s population and 75 percent of its energy resources.

Yet demand for this railway, like many other trans-Eurasian infrastructure projects, has thus far proved disappointing. BTK operators at the Kars railway station recently told Eurasianet that only one train, with just five carriages containing agricultural products, had left the station that week.

Nevertheless, local officials remain optimistic that the railroad can address some of the region's troubles, such as difficulties shipping its agricultural products. “There are 300 people directly employed by the BTK,” Rahmi Doğan, governor of Kars, told Eurasianet. “But we are hoping there are additional benefits brought on by increased trade. God willing, this trade will help overcome our economic problems and create jobs.”

Locals also hope a logistics center, which will process customs clearances and warehouse cargo, currently in the early stages of construction on the outskirts of Kars, will increase demand by streamlining trade. “Cargo from Central Asia and China will be stored here,” said Barış Canbaz, a project manager at the center’s construction site. “Any items passing through will be stored here and then loaded onto the trains.”

The BTK is also expected to feed into the town’s growing tourism sector. In recent years, Kars has seen an uptick in its economic fortunes thanks to the popularity of Turkey’s Eastern Express railway, which connects the city with Ankara. Tourists flock to the region in winter, taking advantage of the frozen Çıldır Lake and Sarikamish ski resort. Indeed, snow is central to the town’s identity; the Turkish word kar means “snow.”

“The railway is very important as it connects Azerbaijan and Turkey,” Doğan said. “Azerbaijan is our friend and ally and so the project is important politically, but we also hope more [people] will come to the region and seek investment opportunities.”

By the end of this year, the BTK is slated to begin transporting its first passengers, with backers claiming a potential 1 million travelers per year.

“There have been so many joyful comments on Azerbaijani social media because the prices for BTK passenger trains will be much lower than for airplane tickets,” said Fuad Shahbazov, a political analyst based in Baku. “As a result, the passenger trains may further boost economic cooperation between Turkey and Azerbaijan.”

Planners are currently looking for ways to connect the railway network to Nakhchivan via Kars. Azerbaijani and Turkish officials have said they hope to work with Iran to build a BTK spur through Nakhchivan to Iran and Pakistan via a recently restored Soviet-era railway link between Nakhchivan and the Iranian city of Mashad. “Since the region is so important, we want another project linking Kars, Nakhchivan, Iran and Pakistan,” Arslan said.

But Shahbazov says the railway projects' economic impact may be more mixed.

“Most probably, the railway will enable Turkey to flood the local Nakhchivan market with goods,” he said. “There is also concern that this railway project will not recoup the costs [for Azerbaijan],” Shahbazov said. “Nevertheless, given the socio-economic effect, Azerbaijan may view the rehabilitation of the line to Nakhchivan as a priority.”

Complementing Kars’s bid to expand into the Iranian market, Azerbaijan has put forward the capital to make it a reality. In January, Tehran accepted a $500-million loan from Baku to construct a 205-kilometer railway from Rasht to the Azerbaijani border (known as the Rasht-Astara line). Then in March, the foreign ministers of Iran, Turkey, Georgia, and Azerbaijan all met in the first-of-its-kind quadrilateral meeting.

In a statement following the meeting, the four sides pledged “further enhancement of cooperation for implementation of new projects in order to develop transport infrastructure and increase the transit potential of the four countries […] starting from the Iranian ports of Bandar-Abbas and Chabahar at the Persian Gulf through Rasht-Astara connecting to [the] Baku-Tbilisi-Kars railway.”

One regional country is conspicuously missing from all this integration, however: Armenia.

Turkish officials hope the BTK can act as leverage over Yerevan to bring an end to the Karabakh conflict.

“We are aware of the problem posed by Armenia,” Arslan said. “We want relations with Armenia too, but we have one important policy to meet this end and that’s to get Armenia out of Karabakh.” Arslan added that “if Armenia leaves Karabakh,” the Turkey-Armenia border would be opened, giving Armenia access to both the BTK and Kars-Nakhchivan railway.

“Ultimately,” Arslan said, “the Armenians have far more to gain from an open border than we do.”