With state help, Azerbaijani TV aims at the bottom 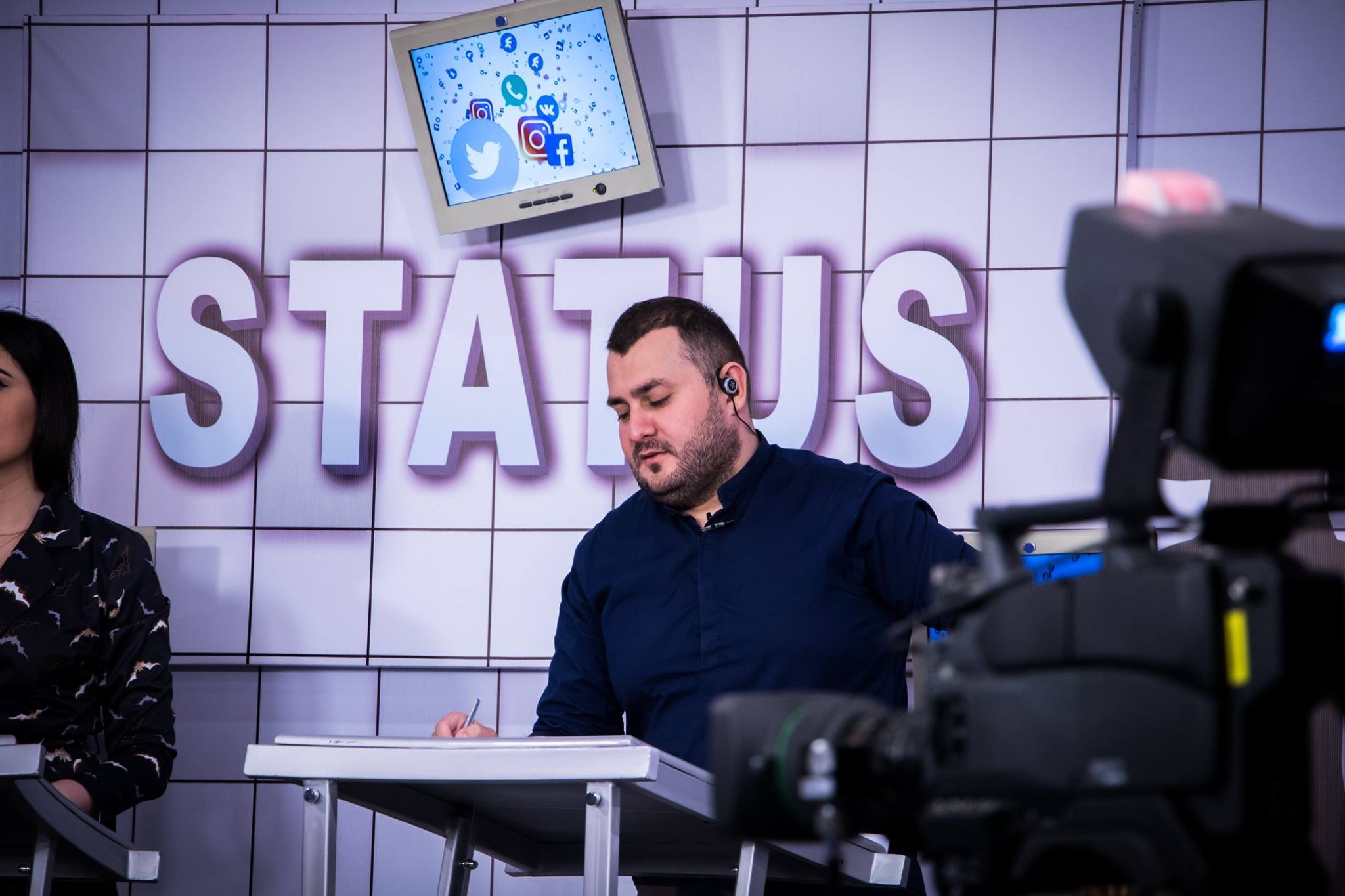 A lawyer, a poet, an actress and a psychologist sit in plush chairs in a slick TV studio. Across from them is 35-year-old Vugar with his parents. The topic: Vugar’s wife’s alleged marital infidelity. Over the course of the hour-long program, the expert panel picks apart the family’s relationship.

“Why did you choose this woman to bear your children?” the lawyer asks Vugar, an internally displaced person from Karabakh, who now lives on the Absheron Peninsula outside Baku. “On Judgment Day, your child will ask, ‘Why did you marry her and why did I come from her body?’”

“Her sister is the same way,” Vugar answers. “Their mother is even worse. I didn’t know them well when we got married.”

This is “Come and Share Your Grief,” one of the most popular shows on Space TV, a private television network close to the ruling family. With its focus on salacious melodrama – heavy on relationship problems, in-law conflict, and domestic violence – it is typical of Azerbaijan’s television landscape today.

Other popular shows in Azerbaijan include “Let Me Tell You,” “Our People, Our Secret,” “You Are with Us.” They are widely watched and discussed on social media, and are frequently a source of controversy.

“In our time it was exemplary people who appeared on television,” said Rasim Balayev, a prominent actor, in a recent interview. “Today anybody on the street can be on TV. An immoral person teaches me morals, a corrupt person lectures me about corruption, a stupid person teaches about intellect.”

While shows like these are far from unique around the world, in Azerbaijan they enjoy an unusual level of state support.

Over the years, the government has provided substantial subsidies to private television networks. In 2011 it granted 5 million manats (about $6 million at the time) to television stations to produce programming; in 2013 it allocated 6 million manats for the same thing.

According to a 2013 decree by President Ilham Aliyev, the money was spent “taking into account the great significance of television programs in promoting the cultural heritage of the Azerbaijani people and ingraining spiritual values and the formation of a national consciousness.” The funding helped get about 40 shows produced, mostly soap operas, according to a report from the National Television and Radio Council.

And in January, Aliyev announced a 3 million manat (about $1.8 million) state grant to private broadcasters to help them utilize a new Azerbaijani-launched satellite, Azerspace-1.

Many of today’s private TV channels were launched in the early 2000s, as Azerbaijan gained membership in the Council of Europe, which tried to push Baku to expand media diversity. One Council report from 2000 criticized the state’s dominance of television and the difficulty setting up private television stations.

All of the new stations, however, were set up by people with close connections to the government. The founder and president of Lider TV, a private network known for airing smear campaigns against opposition political figures and independent journalists, is Adalet Aliyev, Ilham Aliyev’s cousin. Aliyev’s sister, Sevil Aliyeva, is the founder of Space TV.

“There is absolutely no opportunity for businessmen in Azerbaijan to have a television network unless they have a close connection to the government,” Khalid Aghaliyev, an expert on Azerbaijani media law, told Eurasianet.

Some independent figures have applied to get broadcast licenses, but they’ve failed. In 2011, when the government announced a tender for a new license for radio broadcasting, journalist Yashar Agazadeh and human rights defender Rasul Jafarov applied. They were rejected, and the license was given instead to Araz Radio, which is headed by the son of Ali Hasanov, a senior adviser to Aliyev.

The Media Rights Institute, a local press freedom organization, took the case to the UN Human Rights Committee, complaining that it was a violation of the freedom of expression. In 2017, the body ruled against the government, its first ruling on Azerbaijan. (In the meantime, the Media Rights Institute was forced to close, a victim of the increasing restrictions on civil society groups in the country.)

For private networks, the state funding fills a critical gap. The country’s economy has been suffering and, as a result, there has been a decrease in advertising spending that might allow the stations to operate more independently. Advertising in media dropped from 25.1 million manat in 2014 to 4.6 million manat in 2017, the last date for which figures are available, according to government statistics.

“The media needs advertising revenues, but there is no such market in Azerbaijan,” Aghaliyev said.

This appears to be at least partly due to politics, in addition to the economic causes. Companies that might advertise on television are often state-controlled and thus are subject to political pressure when allocating ad spending. A 2012 report by the free press organization Article 19 noted that: “The Azerbaijani economy is predominantly state-run and hence resources available on the market for media belong to the government. In 2008, 40 percent of all expenses were paid by the banking sector and 25 percent by telecoms, all in the government’s control.”

“It does not suit the authoritarian regime, which is interested in information management and disorienting society, to have a large and free advertising market,” the independent news agency Turan wrote in a report on television advertising. Such a market would threaten to form “financially and politically independent media, as it was in the 90s of the last century.”

“This situation has been created purposefully for decades, and private television has no other option than to wait for government aid,” Aghaliyev told Eurasianet.

“Cheating is a godsend”

The first entertainment programs to become popular were show-business gossip and wedding-themed reality shows, both copied from Turkish versions. The reality sector grew and added family-drama series, as well as those offering charity to hard-luck cases. Even ANS, a once-serious independent news station, had largely transitioned to reality TV by the time it was closed in 2016 for allegedly promoting terrorism.

“Only rarely are there good discussions on TVs, and then it’s thanks only to a particular journalist,” said Gulu Maharramli, a journalism professor at Baku State University who worked for nearly 30 years in state broadcasting. “The audience has lost its hopes for TV.”

“Networks prefer shows about interpersonal drama to get attention,” one former TV employee told Eurasianet on condition of anonymity. “There are some favorite topics, including rape and violence. Cheating is a godsend.”

The drama is at least sometimes staged: Backstage footage from one reality show, “I’m Looking for You,” appeared on social media showing that producers were giving instructions to one of the subjects.

“It’s a fact that many of these are staged, with fabricated stories,” the former TV employee said.

Even Aliyev himself has criticized the low quality of Azerbaijani private TV. “Quite often, private television channels compete for advertising. Therefore, they try to show more spectacular shows, which slightly reduces their quality at times,” he told a group of cultural figures in March.

But chasing ratings is not the only incentive. In 2010, ahead of parliamentary elections, the state allocated four minutes of airtime in roundtable discussions on public TV to every candidate. “The result was the best-rated programming in recent years,” Aghaliyev said.

“The [state-]dependent media is scared,” Aghaliyev said. “It spreads harmless content that does not take any risks and that pleases the powers that control them. They don’t care what kind of content the public demands.”

Durna Safarova is a freelance journalist who covers Azerbaijan. Sign up for Eurasianet's free weekly newsletter.