With Turkmenistan, China Now Has "Strategic Partnerships" With All Five Central Asian States 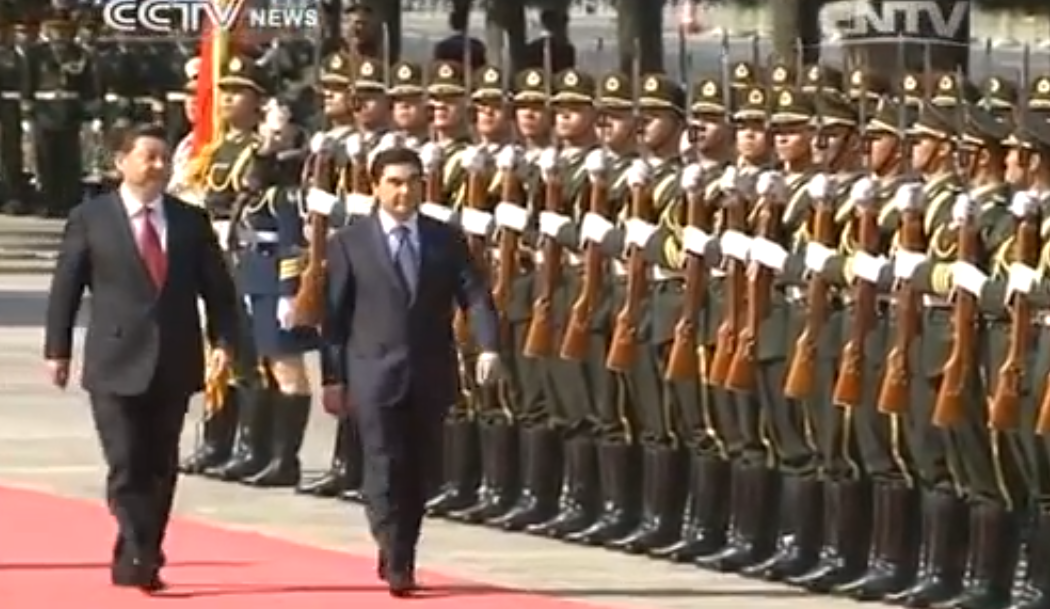 Screen shot of a Chinese state television report on the visit of Turkmenistan President Gurbanguly Berdymukhammedov to Beijing.

While talk of strategic partnerships may be cheap, there's no doubt that China takes its relationship with Turkmenistan seriously. Berdymukhammedov got a pretty impressive welcome in Beijing, and the People's Liberation Army even took the occasion to debut its first ever female honor guards who, as the South China Morning Post put it, "apparently left an impression" on Berdymukhammedov:

Clad in skirts, riding boots and hair pulled back into the classic chignon, 13 women soldiers from China’s military debuted as honour guards on Monday to welcome the visiting Turkmenistan president.

They are the first female People’s Liberation Army honour guards since the squad was established in 1952. Their attire of knee-high skirts and five-centimetre heels singled them out from the rows and rows of sober, hunter-green uniforms of their male comrades.

Their presence apparently left an impression on President Gurbanguly Berdimuhamedov, who is in China at the invitation of President Xi Jinping.

China-Turkmenistan ties are, of course, focused on energy. Just last week Berdymukhammedov inaugurated two new Chinese-built gas processing facilities, and gas exports are scheduled to increase from about 25 billion cubic meters this year to 65 billion in 2020.

During his visit, Berdymukhammedov also visited the offices of the China Aerospace Science & Industry Corporation to talk space cooperation. And the two sides signed deals to increase cooperation on infrastructure, telecommunications, agriculture, health care, and technology.