Without a clear alternative, Pashinyan manages to cling to power

While Armenians increasingly agree that the prime minister needs to step down, they are divided on who could replace him. 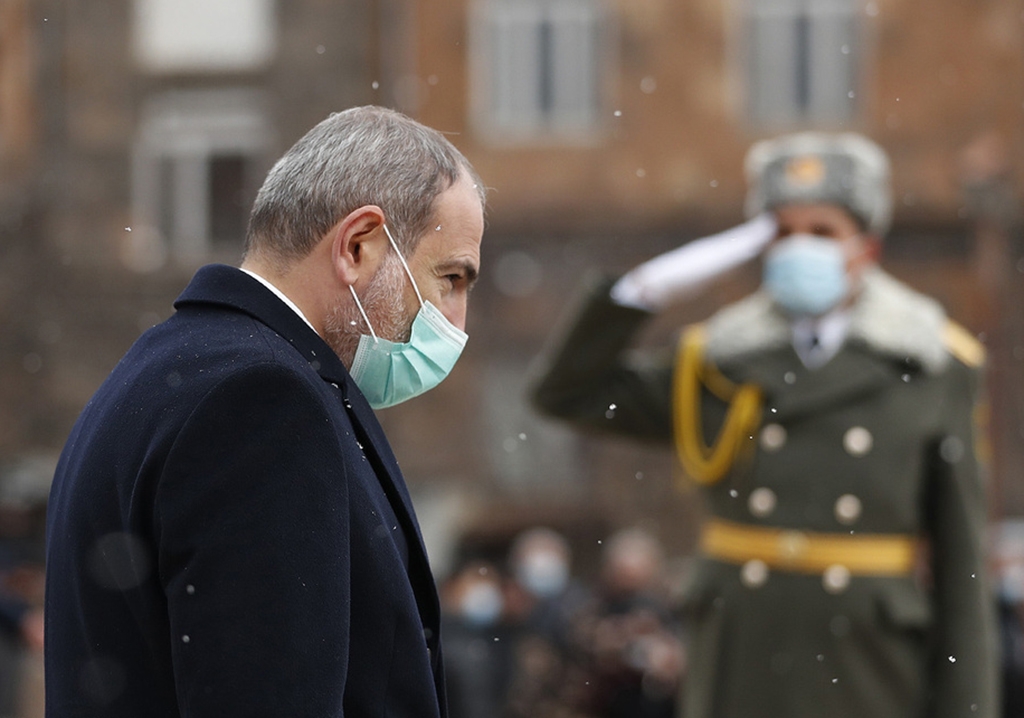 The loss in the war has crippled Pashinyan politically. (government handout)

In the wake of Armenia’s catastrophic defeat to Azerbaijan, the pressure continues to build on Prime Minister Nikol Pashinyan to step down. While a wide swath of Armenian society now believes he should resign, the more difficult question is: Who should replace him?

The forces aligning against Pashinyan are growing by the day, and those publicly demanding his resignation now include the country’s president, the two opposition parties in parliament, all three former post-Soviet leaders of Armenia, the leaders of the two major Armenian churches, the academic council of Yerevan State University, and several provincial governors and mayors.

Though there is no accurate polling to measure public sentiment, it appears that ordinary Armenians also have lost faith in the prime minister, who took power in 2018 on the back of street protests.

“Pashinyan has to go, but I don’t see a proper replacement,” Arthur Manucharyan, a thirty-something Yerevan taxi driver, told Eurasianet.

Pashinyan was initially wildly popular, and his coalition won more than 70 percent of the vote in parliamentary elections in December 2018. The loss in the war, though, has crippled him politically.

“It’s very clear that the mandate that the prime minister won two years ago no longer stands,” said political analyst Eric Hagopian in an interview with CivilNet. “He doesn’t have 75-80 percent support – he probably has half that.”

But it isn’t clear that any other Armenian political figure has more support. President Armen Sarkissian has been taking a higher-profile role, but he has stopped short of proposing himself as a Pashinyan successor and his campaign doesn’t seem to have caught on. Edmon Marukyan, the head of the opposition Bright Armenia party, also has put himself forward as a candidate but has gotten even less traction.

A coalition of opposition groups, including the former ruling Republican Party, have been organizing regular street protests in Yerevan demanding Pashinyan step down. They are proposing a caretaker government to rule for a year and then for new parliamentary elections to be held, and have put forward their own candidate for prime minister: Vazgen Manukyan, 74, Armenia’s first post-Soviet prime minister.

But Manukyan is a polarizing figure, and his association with the discredited former regime disqualifies him in the eyes of many Armenians.

“It is the same as bringing Sargsyan and Kocharyan back,” the taxi driver Manucharyan said, referring to the last two pre-Pashinyan presidents. Still, he added: “Manukyan is smart and he has managed crises before. I have thought a lot about this and I’ve come to conclusion that the new leader should be someone who has been in politics for long time, so he doesn’t get surprised by the new realities.”

“It’s no secret that Pashinyan and his team are incompetent,” another thirty-something, Arsen Babayan, told Eurasianet. “They are better managers of public opinion than crisis managers.” But he said that the opposition alternative was no good, either: “I’m not that young, I know who Manukyan is and he is not a better alternative. He is an outdated politician with radical views. In the ‘90s we lived in fear.”

With many Armenians uneasy with the resurgence of old regime figures, the protests in Yerevan have been relatively limited in size. They certainly are far smaller, to date, than the 100,000-plus that Pashinyan managed to gather a little less than three years ago in his successful campaign to oust then-prime minister Serzh Sargsyan.

Nevertheless, as time goes on these protests have been growing and adopting new civil disobedience tactics. And they do carry certain echoes of the 2018 events, like the regular marches and blocking of streets. The signature chants of each – “Serzhik – go!” and “Nikol – traitor!” respectively – even have the same staccato rhythm in Armenian.

And now, as then, the motivation of those coming out to protest was more opposition to the acting government than support for the alternative being presented.

Still, the mood is noticeably darker than it was in 2018. The police presence at many of the demonstrations is far larger, and there are regular confrontations between marchers, observers, and police. At one recent protest in Yerevan’s Republic Square, an elderly man held a sign reading “Vazgen Manukyan for prime minister.” A police officer shouted at him “Ando, if you show up here one more time we are going to send you to the nuthouse.” A group of women came up to Ando and screamed: “You are a Kocharyanite!” Another police officer, watching the scene play out at a remove, told Eurasianet: “They are all crazy, this is our regular crowd.”

One soldier who was attending the demonstration, and who asked that his name not be used, said that he was considering emigration. “The situation here is even more difficult than in the war, when we were expecting to die,” he said. “People have lost their homes and everyone has gone crazy but the real crazy person, Nikol, doesn’t want to leave. If he’s not leaving, then I’m leaving.”

In the face of the protests, Pashinyan has refused to step down, arguing that those on the streets do not represent Armenian public opinion. “Ninety percent of those who are demanding my resignation are the people who have been demanding it since June 2018,” he told a December 9 sitting of parliament. “If the people demand that I be shot, then I should be shot or hanged – but that has to be the opinion of the people, not of particular groups,” he said.

The government has, so far, successfully managed to tie the current protests to the old regime and thus blunt their effect, said Karine Ghazaryan, a journalist for the news website media.am. She noted that the government made a video that went viral showing the mobs who stormed parliament immediately following Armenia’s surrender to Azerbaijan, identifying many of the members as people connected with the former government. “The government used this episode to frame its message as ‘Do you want them to replace us?’” she told Eurasianet.

“Another problem is that someone needs to come up and say, ‘I'll be your leader,’” she added. Marukyan has little elite support, Sarkissian hasn’t been assertive enough, and Manukyan is “a boogeyman from the past,” she said. “The weak opposition is the key reason why Pashinyan has been able to stay in power,” she said.