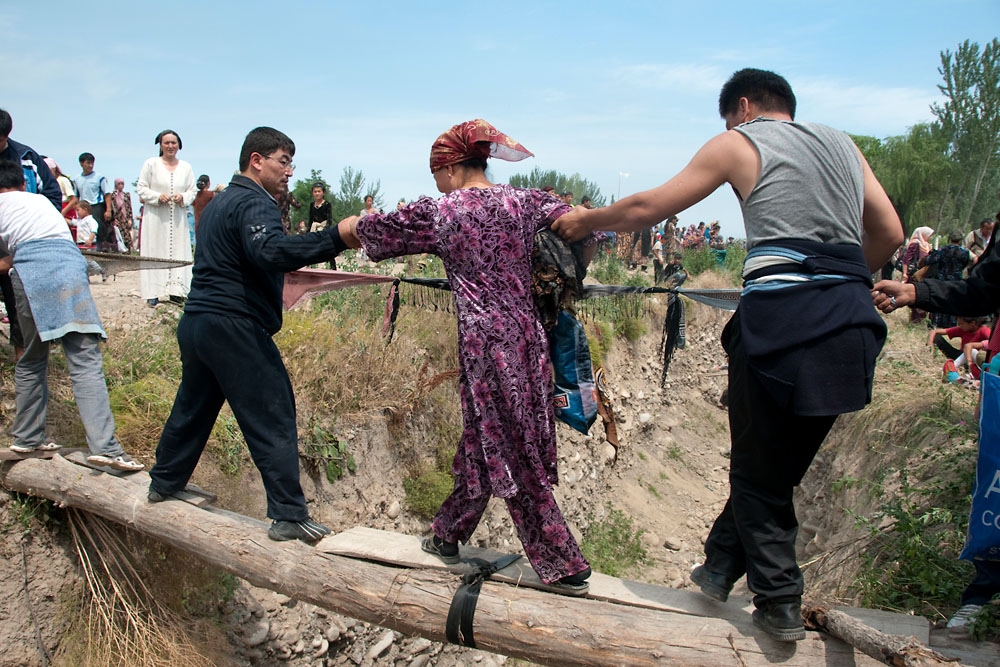 Photographer Dalton Bennett was in southern Kyrgyzstan during the early days of the inter-ethnic violence that claimed hundreds of lives and drove hundreds of thousands from their homes. Here is his account of his experiences at makeshift camps of displaced Uzbeks and elsewhere.

Friday, June 12 – In the village of Naramon

In the village of Naramon, not far from Osh airport, sniper fire rang out in the early morning. Several were killed and dozens wounded. At Naramon’s clinic, staffers rushed back and forth to treat the wounded. Short on supplies, they used anything at hand to stop the bleeding of victims. Many injured Uzbeks said they had tried to seek treatment at medical facilities in Osh, only to be purportedly turned away by ethnic Kyrgyz medical staff. One car brought a 14-year-old boy to Naramon shot in the head as he tried to escort his sister to a border crossing. As the doctor lifted his limp body from the bed of the truck, it was clear there was nothing doctors could do. He was pronounced dead.

At the VLKSM border crossing, a sea of women and children dressed in traditional Uzbek colors gathered near a small land bridge, hoping to cross into Uzbekistan. They tried to surge across a trench dug by Uzbek border authorities. Everywhere mounds of belongings, mostly clothes and blankets, were strewn across the area.

In the center of Osh, ethnic Uzbeks searched for the charred remains of those killed during the fighting. The smell of burnt flesh filled the air. Hundreds of homes in the neighborhood were gutted by fire. Many died in their homes. Dozens of individuals, including women and children, were killed by sniper fire from a minaret on Alisher Novoi Street in downtown Osh.

Near the Sara Tosh border crossing, at a makeshift field hospital, I was speaking to medical workers when two cars frantically pulled up. Inside was a 13-year-old girl who had been gang raped. Standing there, grown men began to weep. The victim’s brother with tears in his eyes asked for help.

At another makeshift medical facility, a converted mosque, hundreds of displaced Uzbeks stood outside in the intense sun. With little water and no food, many suffered from heat exhaustion. As I approached the facility, a car rushed up carrying an injured, elderly Uzbek man. He had been severally beaten and tortured, and his toes were cut off. The doctors rushed to treat him. Equipment was sterilized with vodka.

Upon leaving, one elderly Uzbek IDP named Hamid approached me, and, fighting back tears, said: "They came into our homes, our mosques, raped, burned, and killed our women and children. For as long as we live, we will never forget this."

The main road into Jalal-abad city was littered with burned-out cars. Friendship University, founded by a prominent Uzbek entrepreneur, had been burned. Only a shell of the building existed. Businesses with ‘Kyrgyz’ spray-painted on them were untouched. Uzbek homes and business were totally destroyed. Slogans calling on Uzbeks to leave, calling them dogs, were spray painted throughout the city. The city was a virtual ghost town as the 6pm curfew approached.

The Mol Mol Hotel in the center of Jalal-abad was being used as a staging area by security forces. One ethnic Kyrgyz solider named Akil, who said he spent time in Kosovo as a peacekeeper, expressed uncertainty about Kyrgyzstan’s future in the wake of the southern violence.

Patrolling with the military at night, troops took cover behind destroyed buildings and burned cars, communicating back and forth with flashlights. Anyone caught outside was subjected to a document check, soldiers nervously checking papers with their fingers on the triggers of their weapons. Gunshots could be heard throughout the night, and tension remained in the air.

Dalton Bennett is a freelance journalist based in Bishkek.