Wooing the West: Who is Ukraine’s Viktor Pinchuk?

The billionaire is a fixture of the global cultural and political elite, a feat few other Ukrainian oligarchs have achieved. 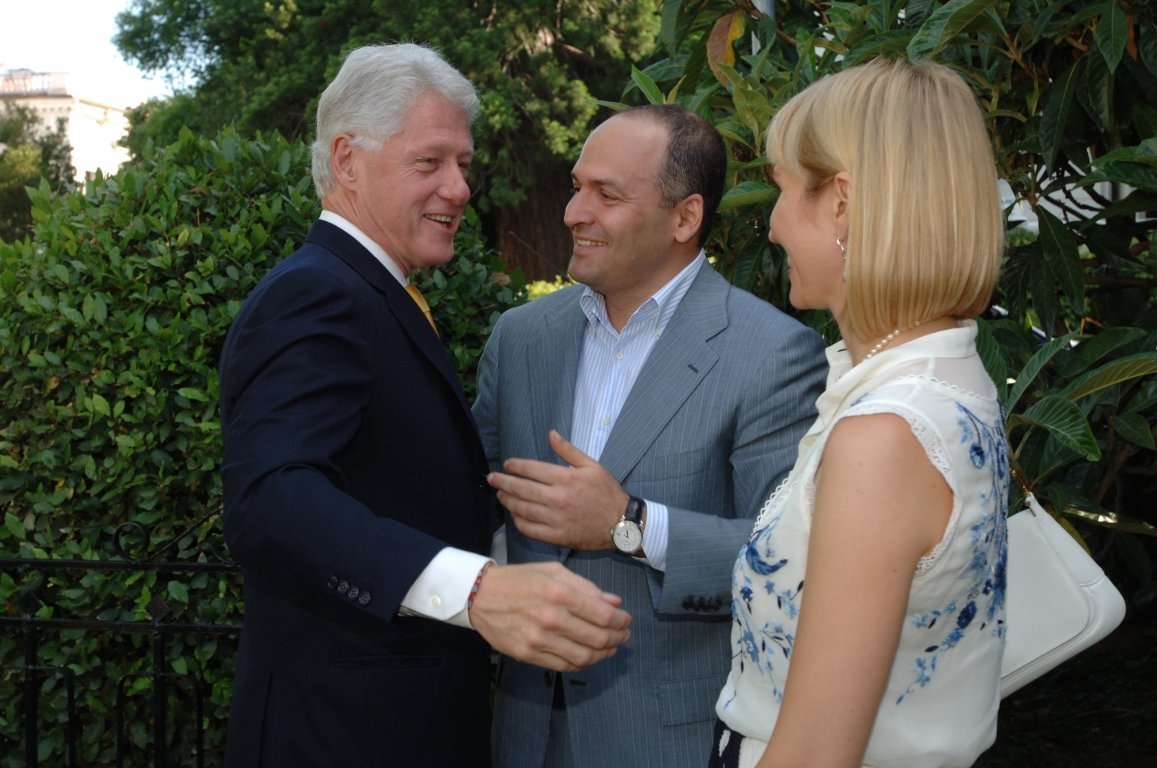 Throughout Ukraine’s tumult over the past three decades, one man has constantly remained near the top of politics and business. Today, despite lingering concerns about the origins of Victor Pinchuk’s wealth, the billionaire is a fixture among the global cultural and political elite, a feat few other Ukrainian oligarchs have achieved.

Born in 1960 to a family of Jewish intelligentsia in Kyiv, Pinchuk’s rise as a business player began at the Dnipropetrovsk Metallurgical Institute, which awarded him a PhD in 1987 and where his mother teaches to this day. With the Soviet economy opening up under perestroika, he went to work for a pipe factory in Belarus, according to a 2013 profile by Tablet Magazine. This first work experience flopped, however: His institution failed to honor a royalty agreement for pipes he had designed.

The setback was brief. Upon his return to Ukraine, Pinchuk set to work building a business empire in Dnipropetrovsk (since renamed Dnipro), where he founded pipeline manufacturer Interpipe Group in 1990, the year before the Soviet Union collapsed. Like many oligarchs who emerged from the era, he took advantage of market reforms and the subsequent confusion, bartering domestic goods for industrial inputs. When asked how he first became a millionaire, Pinchuk told Tablet that "juicers turned into pipes."

The pipe business depended on good relations with Russia, the major export market. To this day, Russia remains crucial to the company. Despite ongoing hostilities between Russia and Ukraine, and Russian sanctions on Pinchuk and his businesses, a July 2019 RFE/RL investigation reported that in the first five months of 2019 Interpipe exported more than 1 billion Ukrainian hrvynia (about $40 million) to Russia.

Pinchuk has never been charged with a crime and has always denied using any illegal means to acquire his wealth.

After establishing Interpipe, Pinchuk’s interests began to spread across the local economy, first into banking with Credit Dnepr and diversifying into the media sector, where he remains a dominant figure, controlling three of Ukraine’s five most-popular television stations: STB, ICTV and Noviy Kanal. Although his oversight of the stations had long been discussed as fact, it was only formally unveiled in 2016 under new disclosure regulations in Ukraine, when local media confirmed that Pinchuk and his wife controlled the three stations through a Cypriot subsidiary.

A different early venture, however, was less of a success. In 1994 Pinchuk and another enterprising businessperson from Dnipro, Yulia Tymoshenko, who would later become prime minister, set up an energy trading business, Sodruzhestvo (“Commonwealth”) to import Central Asian gas. The following year Pinchuk withdrew from their joint venture in circumstances that remain unclear, but which foreshadow their later political rivalry.

Pinchuk was establishing himself as an important local figure. Highlighting the riskiness of business at the time, in 1996 he was reportedly abducted by kidnappers demanding a $2 million dollar ransom.

Interpipe Group may have made Pinchuk a millionaire but his fortune began to soar after he left his wife Olena Arshava in 1997 for then-President Leonid Kuchma’s daughter, also named Olena, who was married at the time to the son of one of her father’s allies, the head of the Crimea regional government.

“The cooler, the better”

In his 2005 book Virtual Politics: Faking Democracy in the Post-Soviet World, the University of London’s Andrew Wilson argues that in 2002 Pinchuk set up a fake political party aimed at attracting young people. Some youth thought the acronym for the “Winter Crop Party,” KOP, a turnoff, but nevertheless Pinchuk’s television stations aggressively promoted it. Drawing votes away from the opposition in such a way is what Wilson calls “shamelessly exploiting public disillusionment with politics.”

The party “had the best, certainly the grooviest, adverts, created on the principle chem kruche, chem luche (‘the cooler, the better’). On an interactive reality show broadcast on the Pinchuk TV channels (STV, ICTV) members of the public competed to win a place on the party’s list for the elections.”

Pinchuk himself had first been elected to parliament in 1998, where he would serve until 2006. Other Ukrainian oligarchs have alleged in British court documents that Pinchuk served as a campaign fundraiser, particularly ahead of the 2004 election that ultimately precipitated the Orange Revolution. These oligarchs, including Ihor Kolomoisky and Hennadiy Boholyubov, claimed they paid $100 million into a fund set up by Kuchma for electioneering before the vote, and allege that Pinchuk subsequently pocketed it.

Pinchuk denied this, accusing the pair of seeking to exclude him from a deal to buy into iron ore miner KZhRK, one of the largest business in Dnipropetrovsk Oblast. The three settled out of court in 2016. An investigation by the Organized Crime and Corruption Reporting Project subsequently revealed that Kolomoisky and Boholyubov transferred two upscale London properties to Pinchuk as part of the settlement. The OCCRP report also alleged the structure was put together in a manner that avoided Ukrainian taxes.

While Pinchuk was in parliament, his connections to the Kuchma family appear to have benefited his businesses. Ukraine’s second president is credited with opening the economy, but is accused of allowing friendly businessmen like Pinchuk to snap up key assets for cheap during rushed privatizations. Pinchuk has insisted this is not true, telling the New York Times in 2008 that "the only gift I get from Kuchma is my wife."

A year after his marriage to the president’s daughter, in 2002, Pinchuk embarked on his most controversial deal: the underpriced purchase of steel giant Kyrvorizhstal from the state.

The acquisition was kiboshed by the Orange Revolution, which also ultimately elevated Tymoshenko to the prime minister's post. She also investigated earlier court rulings issued while Kuchma was still president. In January 2006, Ukraine’s Supreme Court ruled the part-privatization of the Nikopol steel factory to Interpipe in 2003 was illegal, though this did not affect other purchases of smaller stakes in the company.

The Orange Revolution may have caused Pinchuk headaches – he, like his father-in-law, supported Viktor Yanukovych, whose fraud-stained election set off the revolution – but in retrospect it was merely a bump in the road. He took his businesses abroad, bringing them into a UK-registered holding company, EastOne, part of a wave of offshorizations  that followed the Orange Revolution. Within a few years, however, the revolutionaries’ anti-corruption zeal flagged, Yanukovych took over as prime minister, and the business climate returned to the status quo ante. In 2008, Pinchuk sold Ukrsotsbank for 1.5 billion euros to Italy’s Unicredit, just four years after purchasing it for $250 million. The following year he expanded his Russian investments, buying the country’s second-oldest insurance company.

The need for friends in the West became urgent following the 2000 murder of journalist Georgi Gongadze, a pioneering anti-corruption investigator, who three months before his death said he was going into hiding because he was being harassed by Ukraine’s security services. Kuchma has long been accused of involvement in Gongadze’s beheading, and was even charged by prosecutors in 2011, though the charges were subsequently dropped. When questioned, Kuchma said he was “morally ready to go through all the torments of hell so that everybody knows what I've done and what I haven't done," alleging the murder was a "horrible provocation" against him.

A coalition of journalists, academics and London-based activists later accused Pinchuk of trying to cover-up the affair by commissioning a white-wash film, PR, broadcast on his ICTV television station and featuring veteran American journalists.

For Pinchuk, the episode was one of his first forays into what has been dubbed “reputation laundering.” By the next decade, his spending on philanthropy and consultants swelled. In 2013, Britain's Telegraph revealed that he had donated 320,000 pounds to the Tony Blair Faith Foundation. He became a major donor to the Atlantic Council, one of the most prominent U.S. think tanks. The council reports his foundation as having given between $250,000 and $499,999 in 2018 alone, and he sits on the organization's international advisory board.

In a 2009 interview with the Financial Times, Pinchuk was asked if he was seeking political protection with his philanthropy. His meandering response did little to settle questions about his aims: “If you speak about freedom of speech, for example, that is much stronger protection for you. If you speak about the European Union, what kind of protection is that? [...] It is much easier to play the game.” When the FT journalist prodded on why he thought freedom of speech, even after indicating it was a hollow value, offered more protection, Pinchuk elaborated: “because the rest of the world really likes to speak about it.”

Pinchuk has also spent millions on philanthropy in Ukraine: neonatal centers, a prominent Holocaust memorial, and scholarships. He has also funded a series of Western-facing Ukrainian institutions, including the Yalta European Strategy (YES) conferences and the Davos Ukrainian Breakfast. According to its 2018 annual report, the Pinchuk Foundation disbursed $11.3 million that year.

In the United States, he has engaged high-profile politicians on both sides of the blue-red divide. While Hillary Clinton was secretary of state, his foundation donated at least $8.6 million to the Clinton Foundation, according to the Wall Street Journal. He reportedly paid $150,000 to then-candidate Donald Trump's foundation for a 20-minute call in to the 2016 YES conference. He also reportedly once hired Trump's disgraced ex-campaign manager Paul Manafort, who is now in prison for his Ukrainian escapades. After 2011, he employed Doug Schoen, a longtime advisor to Michael Bloomberg and former pollster for Bill Clinton. (Schoen resigned in November after Bloomberg announced his candidacy in the 2020 presidential election). Ex-National Security Advisor John Bolton received $115,000 for two appearances at Pinchuk events the seven months before he joined the Trump Administration.

More philanthropy can be expected. In 2013 Pinchuk signed the Giving Pledge, the Bill Gates- and Warren Buffet-backed initiative where the ultra-wealthy promise to give away at least half their assets by the time they die. In his pledge, Pinchuk struck a civic tone, noting that “governments have both fewer means and greater spending needs.”

Pinchuk has also cultivated a reputation as a patron of the arts, opening the Pinchuk Art Center in Kyiv, where he has appearing alongside artworld darlings like Jeff Koons and Damien Hirst. Though he has long shown interest in the performing arts, his taste for modern art may not be as organic. In 2011, The Art Newspaper reported that after the Gongadze murder, his family “was battered by bad headlines and Pinchuk hired a PR company based in Paris to help. One of their recommendations was to buy art and put it on public display.”

Today, he remains at the pinnacle of Ukrainian politics. President Volodymyr Zelensky spoke at his 2019 YES conference, while last month Prime Minister Oleksiy Honcharuk attended his annual Davos breakfast. Pinchuk’s career highlights the nexus between politics and wealth at home, but the imprimatur of a sparkling, Western-facing reputation helps sustain it.

In a 2014 Forbes profile that dubbed Pinchuk a “democratic oligarch” and featured complements from Blair and Elton John, he invoked the importance of “European values,” including the freedom of speech he had discussed so cynically over wine with the FT just five years earlier. To Forbes he insisted these values are not enough to set Ukraine on a path towards success. “Ukraine cannot be successful without Russia,” he said.