Would South Ossetia, By Any Other Name, Be So Contentious? 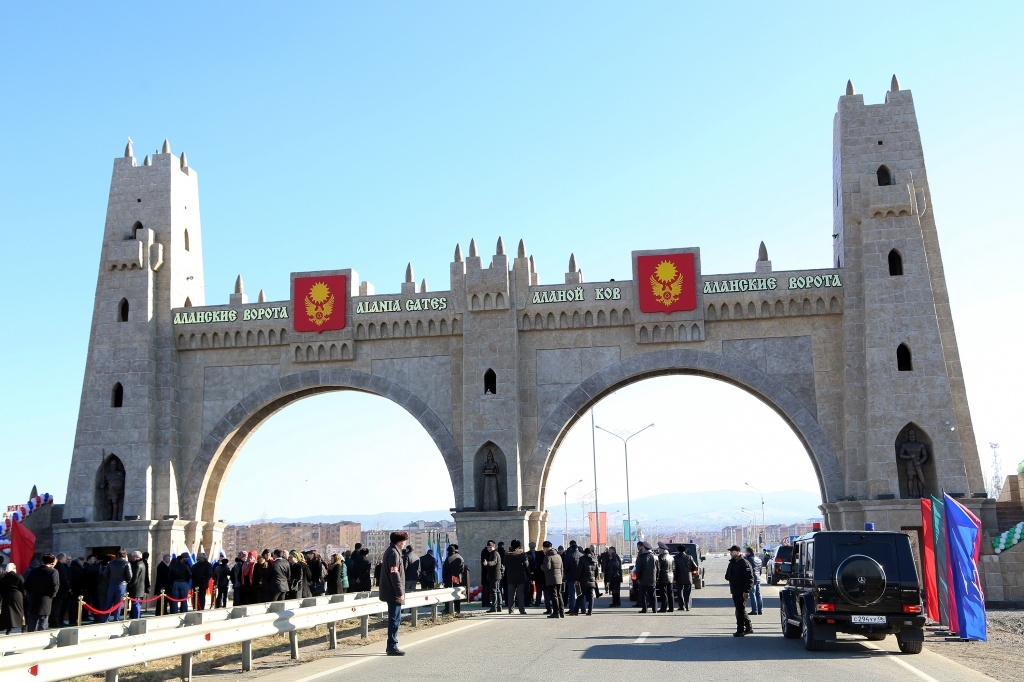 In 2015, the government of Russia’s Republic of Ingushetia erected a ceremonial arch (pictured here) over the road leading to its capital, Magas, calling the arch “Alania Gates.” A week later, South Ossetia’s de facto president Leonid Tibilov proposed renaming his self-declared republic after Alania, amid a conflict with several of the breakaway territory’s neighbors over who are the true heirs of the medieval Caucasian kingdom of Alania. (Photo: Official Website of the Republic of Ingushetia)

The authorities in South Ossetia want to change the name of their self-declared republic in response to a historical dispute with a rival Caucasus nation. A rebranding could also, some in South Ossetia hope, hasten its incorporation into the Russia Federation.

In November, South Ossetia's de facto president Leonid Tibilov announced that he was forming a political council to address renaming the republic after Alania, a medieval Caucasian kingdom.

South Ossetia may appear to have more pressing concerns. Its traditional agricultural economy has collapsed and most residents rely on state jobs paid out of the budget of its superpower patron, Russia. Its population of 50,000 (according to official statistics) is isolated, cut off from Georgia – to which it still belongs, in the eyes of most of the world – by an increasingly hardened border.

But that has been put aside for the moment, as public debate has shifted to the conflict between Ossetians and several of their Caucasian neighbors over who are the true heirs of Alania, a kingdom that existed from the 8th to 13th centuries. At its peak in the 10th century, Alania controlled most of the North Caucasus, and was “the first and the only indigenous political establishment in the Northern Caucasus before the Mongol invasion,” wrote historian Victor Shnirelman. “Thus, the Alan identity provided one with a symbolic prestige of both bearers of higher culture and 'civilizers.'”

That prestige has led many North Caucasus peoples to identify themselves with the Alan legacy. Ossetians – who are divided into two entities, North Ossetia in Russia and South Ossetia, still considered by most of the world to be part of Georgia – have been the most active in claiming Alanian lineage. The Russian republic of North Ossetia renamed itself to “North Ossetia – Alania” in 1994. Across the Ossetias, supermarkets, hotels, dance troupes, and a brand of mineral water are all named after Alania.

Other North Caucasus peoples, including Chechens and Karachais, also have tried to connect their national history to Alania. But the Ossetians' most aggressive challengers for that legacy are the Ingush. The Republic of Ingushetia, which borders North Ossetia to the east, founded a new capital in 1995 and named it Magas, after the ancient capital of Alania. And last year, the Ingush government erected a ceremonial arch over the road leading to Magas, calling it “the Gates of Alania.”

The response from both Ossetias was swift. “Of course, in Ossetia we can not remain indifferent to these events. ... This action carries a political, and in no way historical or scientific character,” said Lyudvig Chibirov, South Ossetia's first president, in an interview with a North Ossetian newspaper. “Unfortunately, the rewriting and fabrication of historical facts as one sees fit, the peremptoriness and aggressive dilettantism is gathering speed, not only in published works but in this structure.”

A week after the structure was inaugurated in Ingushetia, Tibilov proposed changing South Ossetia's name. “Many peoples would like to distort their own history and appropriate others' history. In South Ossetia we were surprised that the Alanian Gates were erected in Ingushetia, as the entire world knows that the Ossetians are the descendants of the Scythians and Alans, and we will not allow anyone to appropriate our history.”

Tibilov also suggested that a name change to coordinate with North Ossetia-Alania would ease the process of eventually merging the two Ossetias: “That historical moment will come, when the two parts of Ossetia unite and a united Ossetia will again enter the structure of the Russian Federation.”

Russia has financially and militarily supported South Ossetia since the latter broke away from Georgia after a civil war in 1991 and 1992. A second war with Georgia, in 2008, prompted Russia to recognize South Ossetia as independent and raised the possibility that it would be incorporated into Russia.

In February, Tibilov announced that a referendum on joining Russia would be held in 2016, but he later said that it would be postponed indefinitely. Compared with Crimea, which Russia annexed with great fanfare in 2014, Moscow has appeared significantly more cautious about the prospect of incorporating South Ossetia. In April, Russian President Vladimir Putin said that while he had discussed the issue with Tibilov, Moscow was “not considering” integration at the time. Georgia, meanwhile, continues to consider South Ossetia part of its territory.

While the reintegration process appears to have stalled for now, the renaming project has continued apace. It is not yet clear what exactly the new name will be. The council is considering various names, including South Ossetia-Alania, the Republic of Alania, Alania, and others, which will eventually be put to voters in a referendum, a source in the government told EurasiaNet on condition of anonymity. The source added that the date for the referendum is still to be determined.

Public opinion seems to support a name change, though opinions differ on what exact form it should take. Some South Ossetians favor “South Alania,” dropping the “Ossetia” name altogether, under the belief that “Ossetia” is derived from the Georgian name for the people. Others favor using some version of “Iryston,” which is what Ossetians call their nation in Ossetian.

“I support the name change to Alania. And honestly, I'm not sure if there is anyone who opposes it. I don't know any opponents,” Vyacheslav Dzhabiyev, an economist in the capital, Tskhinvali, told EurasiaNet. “The most important thing for me is that the name shouldn't drop 'Ossetia,' so it shouldn't be 'South Alania,' but 'South Ossetia-Alania.'”

But there are some opponents. “We shouldn't rename the entire country just because of someone else's incorrect actions, what the Ingush did,” Dina Alborova, a local political analyst, told EurasiaNet. “Also, we have too many other problems that require financing, and the renaming of the republic would entail a lot of expenses – changing official documents, republishing textbooks, passports, and so on.” But if the name were to change, she would support a different variant, she said: “There is already an Alania in the north,” she said. “We always call our country 'Iryston' and ourselves 'Iron,' not Alans. So let's change the name to Iryston.”

Irina Kelekhsayeva is a freelance journalist based in Tskhinvali. Joshua Kucera is the Turkey/Caucasus editor at EurasiaNet, and author of The Bug Pit. He is based in Istanbul.