Wrestling with past and present: Uzbek father and son cope with life’s takedowns

Garik Arakelov was a sports celebrity in Uzbekistan. Now he’s a plumber in New York, nurturing his son’s own sporting career. 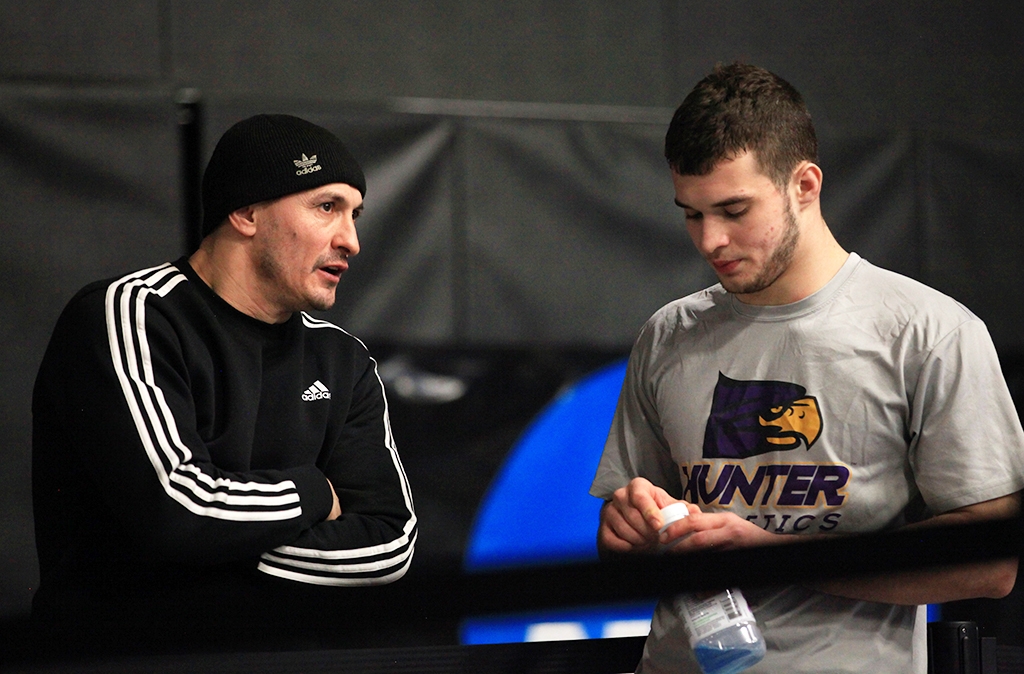 Garik Arakelov with his son, Gevorg, in New York (photos by Wufei Yu)

A few decades ago, amid the breakup of the Soviet Union, Garik Arakelov was a famous karate champion in his native Uzbekistan. These days he lives in relative obscurity, working as a plumber in New York City. For him, the American Dream has meant saying goodbye to past glory. He still harbors some lingering resentment over his fate, but his son’s achievements give him a reason to feel his sacrifices are worth it.

Garik, now 48, won four national karate championships in Uzbekistan in the 1990s. In a country where martial arts are highly popular, Garik was a celebrity. Reporters thronged to interview him after his matches, and people in his hometown of Samarkand treated him with respect.

He longed to compete against the world’s best, but being a national champion was the highest he could go. Garik had the misfortune of being in his prime when the Soviet Union was experiencing its death throes. When the planned economic system finally collapsed in 1991, funding for the Soviet sports machine evaporated. Elite athletes like Garik no longer could count on the state support that allowed them to focus solely on training. Likewise, the state lacked the money to send athletes to international competitions. Many were effectively forced to retire and find paying jobs.

Garik’s local karate club in Samarkand withered: In its heyday the club had roughly 100 members; by 1993 only two remained. Garik was one of the two who kept at it. “There were a lot of talented athletes and fighters. Not everyone managed to survive,” he said. When he finally retired from competition in 1998, he made a living as a karate coach for rising youngsters.

Garik’s son Gevorg was born about a year later. When Gevorg was nine, Garik took him to a club in Samarkand where a former judo and sambo world champion was coach. He saw that his son had the physical attributes for martial arts – a short, wide and solid body, combined with agility. He believed his son had a promising future as a martial arts competitor.

Gevorg, meanwhile, found inspiration in his father’s fading fame. He recounted a story from when he was nine: He had always admired his father’s trophy case at their home and one day he filled a bag with all the hardware that his father had won during his career. The bag was so heavy, he could barely lift it. “I got sparked up and was eager to win something whenever I saw [my dad’s trophies],” recalled Gevorg.

In 2011, life changed drastically for Garik. That year, he was one of 6,000 Uzbek winners in the U.S. diversity visa program, winning not a trophy, but a coveted green card. He left a relatively stable existence in Samarkand behind to start a new life in Queens, one of New York’s five boroughs. He had once believed New York City to be a “land of skyscrapers, opportunities and wonders.” But that vision quickly gave way to a world of pipes and concrete after he found work as a construction worker and plumber. Waking typically at 5 a.m., his life in America followed a relentless routine of fixing faucets, unclogging toilets, welding pipes – six days a week, 12 hours a day. Garik had never expected to leave his martial arts glory so far behind. He originally had aspirations of being a karate coach in the United States, but quickly had to abandon that goal.

Even now, years later, Garik struggles to come to terms with the twist his life has taken. “I don’t even understand myself how I got here and how my family ended up here. It was spontaneous,” he said. He added that when he applied for the green-card lottery, he believed he would not be a pioneer heading into unknown territory, but a follower taking a well-worn path to a more prosperous life. “It [America] was [seen by many in Uzbekistan] like a land of wonder. But when I came here it was not the case,” he said. “Not everyone gets a share of the pie.”

Twenty years after his retirement, Garik is reluctant to talk about his sporting career. When asked about the contrast between his past life in Uzbekistan and his current existence in New York, his eyes blink with tears. It’s still a painful topic.

One of the few sources of joy for Garik has been guiding his son’s athletic career. When Gevorg reached high school, he decided to give wrestling a try. Garik supported his son’s initiative and provided advice. Father and son would stay up late watching European matches live, or go over videos. When his work schedule permitted, Garik would coach his son at a nearby gym.

By the time he was a senior, Gevorg had been voted his high school’s “Male Athlete of the Year 2018,” an honor that had only gone to basketball, baseball and football players in the past. That year, Gevorg dominated on the wrestling mat with a record of 35-4, winning the New York City Championship in his weight class. 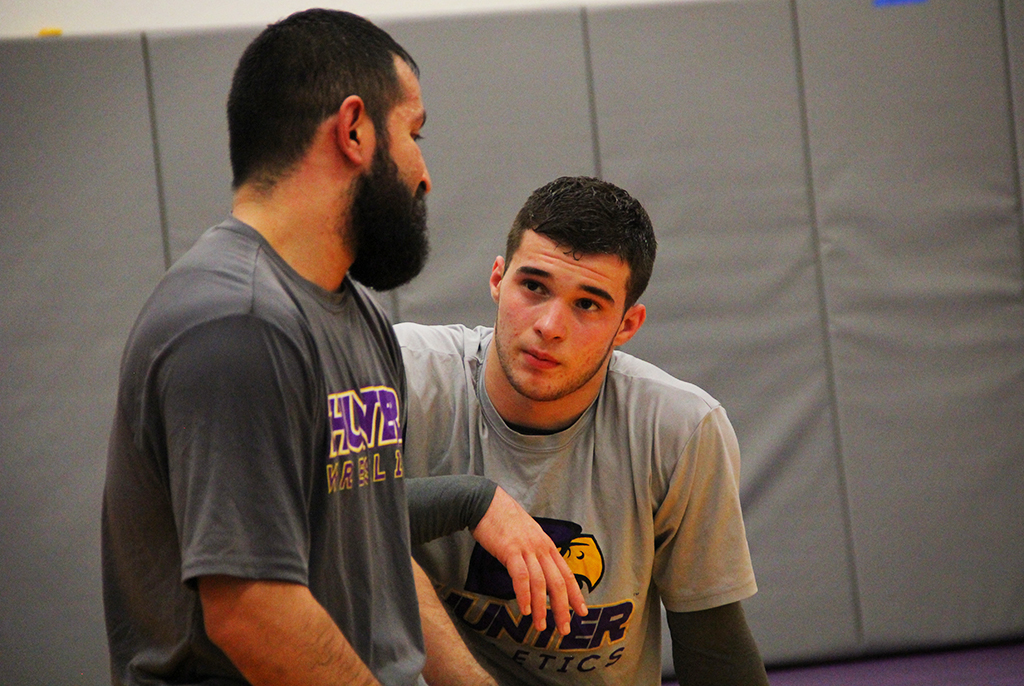 It was the day of the NYC Mayor’s Cup final in January 2018. Among the 300 or so in the audience, Garik sat in the front row with MarcAntoni Macias, the wrestling coach at Hunter College, a leading public college in New York, who had scouted Gevorg for three years. Garik had managed to arrange his work schedule so that he could see his son wrestle. “He never missed any of my competitions in New York,” Gevorg said.

The back-and-forth match was tied 5-5 with 20 seconds to go when Gevorg managed to gain a point to win the championship. As the referee held Gevorg’s arm aloft, his father pumped his fist into the air. He hugged his son when he stepped off the mat. “That means a lot to me because I shaped him,” Garik said of that moment. “My son made our name famous in New York City. That’s a win for the family.”

That same day, Gevorg was recruited by Macias to wrestle for Hunter College.

Gevorg’s college wrestling career got off to a bumpy start in the fall of 2018. During his first match Gevorg experienced a serious rib injury and could not move well. He even received a stall warning. Finally, Macias came to get him, ending the match to prevent further injury. “Everyone could see that he couldn’t wrestle because he was feeling his ribs,” Macias said.

When Gevorg returned home disappointed and in pain, his father reminded him of the story of his own injury and loss from long ago. He too had hurt his ribs – as he was striving to win another national championship. He suffered his only defeat in the finals that day and retired after that match. Garik had been leading 4-0 when his opponent noticed his rib injury and kicked him hard in the injured area. Garik was furious and felt humiliated. He began to punch fiercely, non-stop. The referee penalized him. “The other guy didn’t win,” he now says. “I lost.”

But he is no longer angry when he tells the story. It now serves a purpose: He can use it to keep nurturing his son’s career.

Wufei Yu is a recent graduate of Columbia Journalism School.