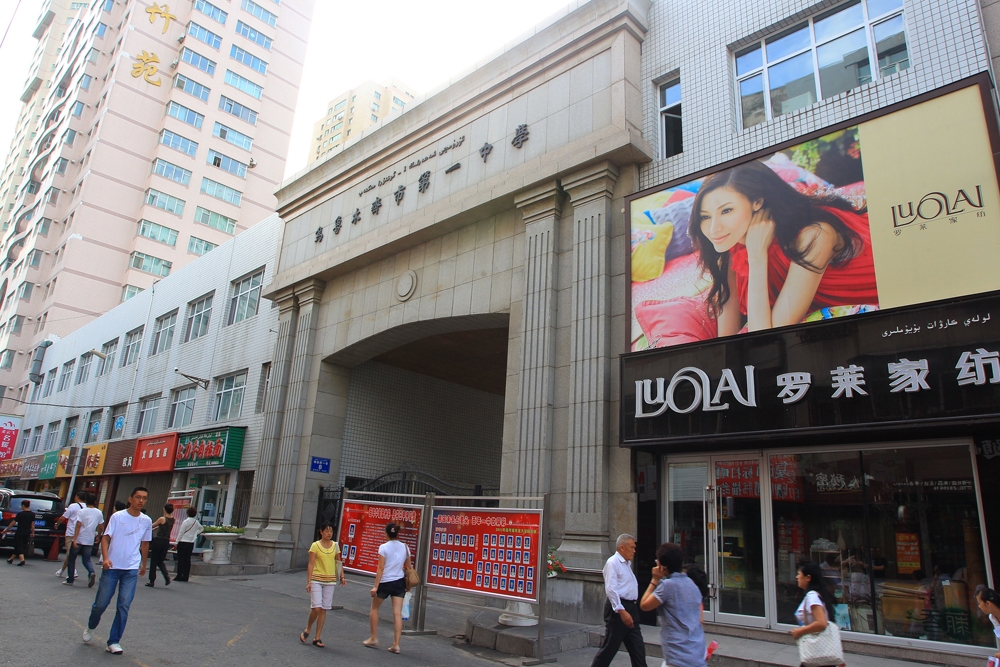 A cityscape of the business district in Urumqi, the capital of Xinjiang, with street and store names written in Chinese and doubled in Uighur. Due to the influx of Han Chinese, who are viewed by Uighurs as “illegal economic migrants,” Uighurs are now a minority in Xinjiang. Discrimination, including restrictions on language, religious practices and travel, along with economic marginalization, is making it hard for many Uighurs to feel at home in China these days. (Photo: Asian Development Bank)

Ethnic Turkic-speaking Uighurs in China have long faced restrictions relating mainly to the practice of their religion, Islam. Now, under new regulations implemented last fall, their ability to travel apparently is being restricted, with residents of western Xinjiang province required to hand over their passports to police for "safekeeping."

When Xinjiang residents want to travel, they now must now obtain permission before retrieving their passports, according to news reports aired by the British Broadcasting Corp. Uighurs reportedly have sometimes been denied passports for travel by officials.

Uighurs, who now comprise about 45 percent of Xinjiang's population, can also be subjected to other onerous procedures. In June, for example, police in Xinjiang ordered residents of Yili to provide DNA samples when applying for travel documents. Residents were also requested to provide a blood sample, fingerprints, a voice recording and a three-dimensional image.

By forcing the residents of Xinjiang to surrender their passports, the Chinese leadership is probably hoping to better control the movement of militant Uighurs. Unconfirmed reports circulating in the region claim that militants who have carried out attacks in Xinjiang and in other Chinese regions in recent years earlier received training in Pakistan and in Central Asian states.

The last prominent terrorist attack on Chinese soil occurred in September 2015, when a group of knife-wielding men attacked off-duty workers at a coalmine, reportedly killing 45 workers and 5 police officers. In 2014, there were a series of deadly attacks, including a suicide bombing in Urumqi that left at least 39 people dead. There were also stabbing attacks at train stations in Guangzhou and Kunming.

Most recently, the Chinese Embassy in Bishkek, Kyrgyzstan, experienced a suicide-bombing incident last August. Uighur militants are suspected of carrying out that attack. But an official investigation has yet to make a determination.

The government blames the violence on Islamist militants or separatists, who it says want to create an independent state called East Turkestan, or “Uyghuristan,” modeled on neighboring Central Asian nations.

Two iterations of an Eastern Turkestan Republic survived from 1931-1934 and 1944-1949 before Mao Zedong and his People’s Liberation Army took control of the region. In 1955, Xinjiang was designated as an autonomous region, partly to win over Turkic speakers in the territory.

Uighur nationalists have long complained that Beijing’s policies toward the region are discriminatory and threaten their distinct cultural identity. The Han were once the minority in this remote far-western region. At the time Mao gained power over 67 years ago, Muslim Uighurs represented roughly 85 percent of Xinjiang’s population; now they are a minority, due to the influx of Han Chinese, who are viewed by Uighurs as “illegal economic migrants.”

The migration of Han into Xinjiang has in recent years been encouraged by Chinese President Xi Jinping. Xi has also stated his desire for Xinjiang’s Muslim Uighur people to relocate to other parts of China.

Discrimination, including restrictions on language and religious practices, along with economic marginalization, is making it hard for many Uighurs to feel at home in China these days. Recent measures imposed on the region include a ban on students fasting during Ramadan, restrictions on religious teaching for children, and limits on Uighur-language education. In addition, the old Silk Road market city of Kashgar has seen its historical neighborhoods demolished and rebuilt, angering local residents.

All these developments have contributed to the radicalization of some Uighurs, encouraging them to embrace a militant response, some rights watchdogs suggest.

While many factors are certainly in play, further restrictions on the travel of Uighurs seem likely to exacerbate feelings of frustration held by many Uighurs. At the same time, they are unlikely to contain militant activity. Lasting stability in Xinjiang will come only when the underlying issues fueling Uighur disaffection are addressed.