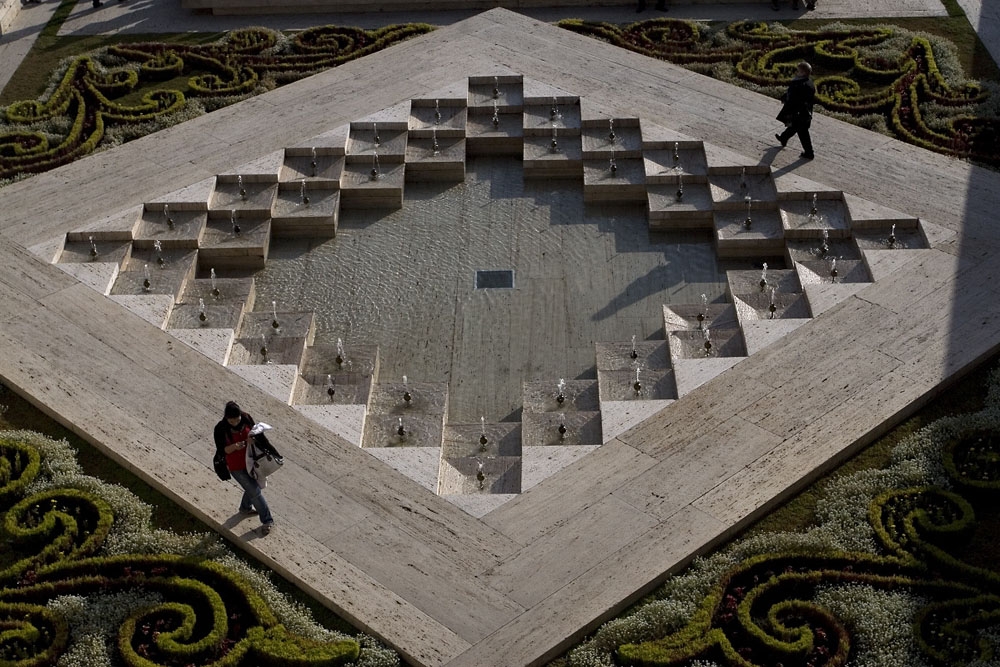 They have built roads and hospitals; schools and factories. And now, with the recent opening of Yerevan’s $35 million Cafesjian Center for the Arts, members of Armenia’s deep-pocketed Diaspora has moved into modern art.

The 1,100-square meter museum, which officially opened its doors on November 7, is part of a seven-year project by Armenian-American Gerard L. Cafesjian, a former member of the board of directors for West Publishing Company, to restore downtown Yerevan's Soviet-era Cascade, a waterfall-like stone staircase built into a hillside overlooking the capital city. It acts as both vanity project - the bulk of the exhibits will be drawn from Cafesjian's own collections of contemporary art - and community goodwill initiative; the Center, a first for the region, is meant to promote appreciation of modern art forms.

One milestone apparently deserves another - on hand to kick off the Center's opening were ex-Beatles wives Cynthia Lennon and Pattie Boyd.

Busily signing copies of "John," her 2005 account of her six-year marriage to Beatles icon John Lennon, Cynthia Lennon described herself as "surprised" by the invitation, but "happy to come."

Photographer Pattie Boyd, first wife of guitarist George Harrison, added to the Beatles retrospective with a presentation of her memoir "Wonderful Tonight" and a photo exhibit on the lives of Harrison, second husband Eric Clapton, the Beatles at large and Boyd herself.

Cafesjian Museum Foundation spokesperson Anna Dira called Lennon and Boyd's trip to the Center "a gift for Armenians," but local reporters and photographers were kept at bay from the celebrity duo. In a conversation with Center Executive Director Michael De Marsche, open to the public at 10,000 dram (roughly $26) per head, the two women touched on their favorite foods, their ex-husbands' drug use, and how they fell in love with Lennon and Harrison.

Media coverage focused more on the Center itself.

With its exhibits on glass, painting, sketches and sculpture, the museum in many ways resembles a kaleidoscope, with ever-changing patterns of colors and materials.

A lower gallery features sketches by Armenian-American abstract expressionist Arshile Gorky, one of the most influential abstract painters of the mid-20th century; a neighboring room shows pieces from Cafesjian's personal collection of modern glass works by Czech artists Stanislav Libenský and Jaroslava Brychtová.

Upstairs, a long line of visitors formed outside another glass expo - a shimmering display of artists' interpretations of chandeliers, sponsored by Austrian crystal company Swarovski.

Outside, a sculpture park in front of the Cascade displays works by mid-20th-century British trailblazer Barry Flanagan and Columbian painter-sculptor Fernando Botero, among others.

Retired biochemist Flora Martirosian called the Center "our national pride," and noted that she had scrupulously picked out her clothes for the Center's opening.

"Armenia, which is famous for its ancient historical monuments, will now have a different role in the region, attracting new tourists," Martirosian commented.

One such tourist was 44-year-old David Zurabashvili, a Georgian psychotherapist who drove six hours to Yerevan from Tbilisi for the Center's opening, and called himself "deeply impressed" by the exhibits.

Reported plans for a potential rival modern art complex in Baku by ex-Guggenheim Foundation Director Thomas Krens drew no response from Center personnel. Spokesperson Dira only asserted that the Cafesjian Center is "unique" in the world.

Dira put turnout for the November 7 opening day at 10,000 visitors, yet some Yerevan residents said that they had expected to see even more.

"But I know that many people just don't have the mood for such events since the political and also social situation is not easy [here]," commented 60-year-old pensioner Melania Hakobjanian.

Others took pleasure in a change from the gripe-and-grind of Armenia's economic crisis and uncertainties of its evolving relations with Turkey.

"This is a true revolution," Hasmik Matevosian, a 30-year-old schoolteacher said in reference to the Center. "Today we can witness the contemporary art we never imagined we'd see."