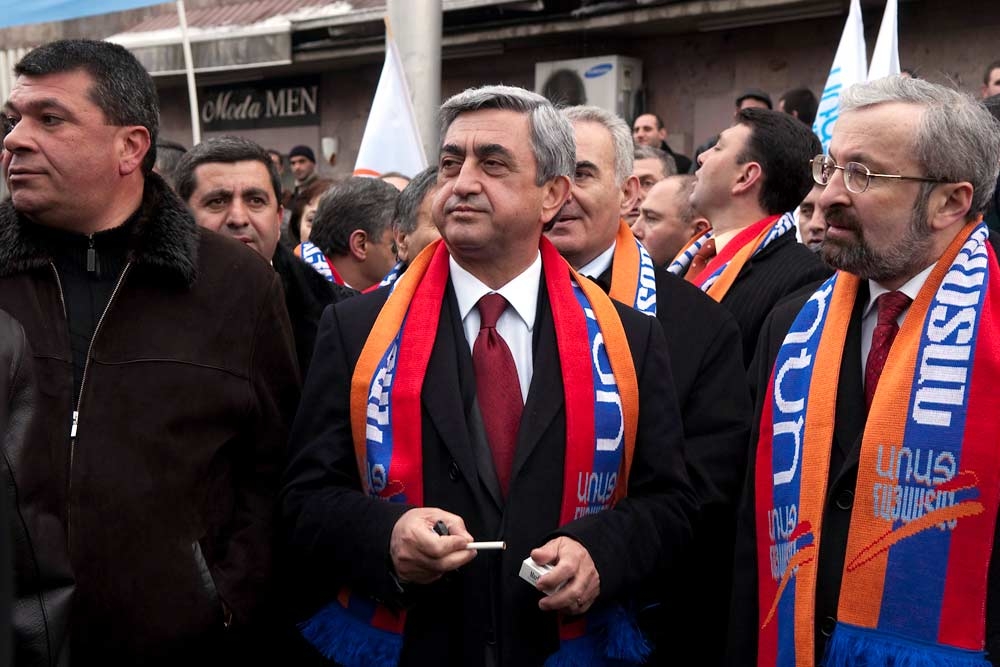 Armenian President Serzh Sarkisian, above, pulls out of reconciliation because of Turkey's demands on Nagorno-Karabakh. (Photo: Dean C.K. Cox.)

Sargyan described the current stage of relations with Turkey as "exhausted." A senior Armenian politician, meanwhile, indicated that the agreement may be recalled from parliament.

In a televised speech to the nation, Sargsyan, who has long backed normalizing ties with Turkey, took issue with what he termed "preconditions" set by Ankara for a peace deal with Armenia. These preconditions, the president contended, caused the process to stall.

"Preconditions" refers primarily to recent comments made by Turkish Prime Minister Recep Tayyip Erdogan, who indicated that Turkey would not normalize relations with Armenia unless Yerevan made progress in peace negotiations with Turkish ally Azerbaijan concerning the future of Nagorno-Karabakh. [For background see EurasiaNet archive].

"Armenia shall retain her signature under the protocols because we desire to maintain the existing momentum for normalizing relations, because we edesire peace," a transcript of the speech published on Sargsyan’s presidential website stated. "Our political objective of normalizing relations between Armenia and Turkey remains valid, and we shall consider moving forward when we are convinced that there is a proper environment in Turkey, and there is leadership in Ankara ready to re-engage in the normalization process."

Armenia’s governing coalition - Sargsyan’s Republican Party of Armenia, the Prosperous Armenia Party and Orinats Yerkir (Rule of Law) Party -- earlier in the day declared that Turkey’s refusal to ratify the agreement "without preconditions" means that "there’s no sense in further continuing the process of their ratification at this stage" in Armenia’s National Assembly.

Republican Party of Armenia spokesperson Eduard Sharmazanov told EurasiaNet.org that the April 22 announcement does not signal a break with the normalization process in full. "We are not withdrawing from the process; we are waiting for a real answer from Turkey -- yes or no, but not an imitation [of real steps toward reconciliation]," Sharmazanov said.

The chair of parliament’s European Integration Parliamentary Committee, Naira Zohrabian, told EurasiaNet.org that President Sargsyan’s recent meetings with coalition leaders suggest that the protocols will be recalled from the National Assembly. Zohrabian, who is also a senior member of the Prosperous Armenia Party, did not elaborate.

Sharmazanov claimed that the international community will understand Armenia’s move. He suggested that the Turkish position had the indirect effect of complicating efforts by the United States, Russia and France, the three co-chairs of the Minsk Group, to make progress in the Karabakh peace process. [For background see EurasiaNet archive].

"I think the international community will interpret our step as normal since the Armenian side does not recall its signature [of the protocols], but rather suspends the process," Sharmazanov asserted. "In this case, Turkey has no way to escape."

One Yerevan-based analyst questioned the government’s logic. "Trying to correct a mistake through another mistake is wrong," said Tatul Hakobyan, and analyst with the Civilitas Foundation and a former journalist who has written extensively on the Karabakh war.

"The Armenian side shouldn’t have removed discussion of the protocols from the National Assembly agenda, but should have left them there to turn into dust," Hakobyan said. "Now the Turks will start to blame Armenia for spoiling the [reconciliation] process, while Armenia won’t be able to persuade the international community that it’s not Armenia’s fault the process didn’t succeed."

Suren Surenyants, a senior member of the political board of the opposition Republic Party, also believes the international community may react negatively to Armenia’s move. Though senior Turkish officials have repeatedly made statements about "preconditions," the Turkish side never declared it had suspended parliamentary discussion of the protocols, he noted.

"Yerevan was the first to voice this statement," Surenyants said. "Actually, the Turkish authorities achieved their aim by driving Armenia to take an irrational position. It turns out now that not only Turkey, but the Yerevan government as well puts preconditions [on the deal by] stipulating ratification of the protocols based only on Turkey’s position."

A more understandable move for the international community would be if Armenia had allowed the vote on the protocols to proceed and succeed or fail based on the agreement’s own merits, he added.

Zohrabian said the Prosperous Armenia Party would have responded negatively to any National Assembly decision to ratify the agreement. "I think the coalition made a very correct move by suspending the process," Zohrabian said. "This is a political break for Turkey to determine its position, whether it wants to follow a civilized path, or whether it prefers irresponsible declarations and reckless schemes."