During the Soviet Union, teaching was a prestigious profession. But salaries have fallen in independent Azerbaijan, along with teachers' morale. 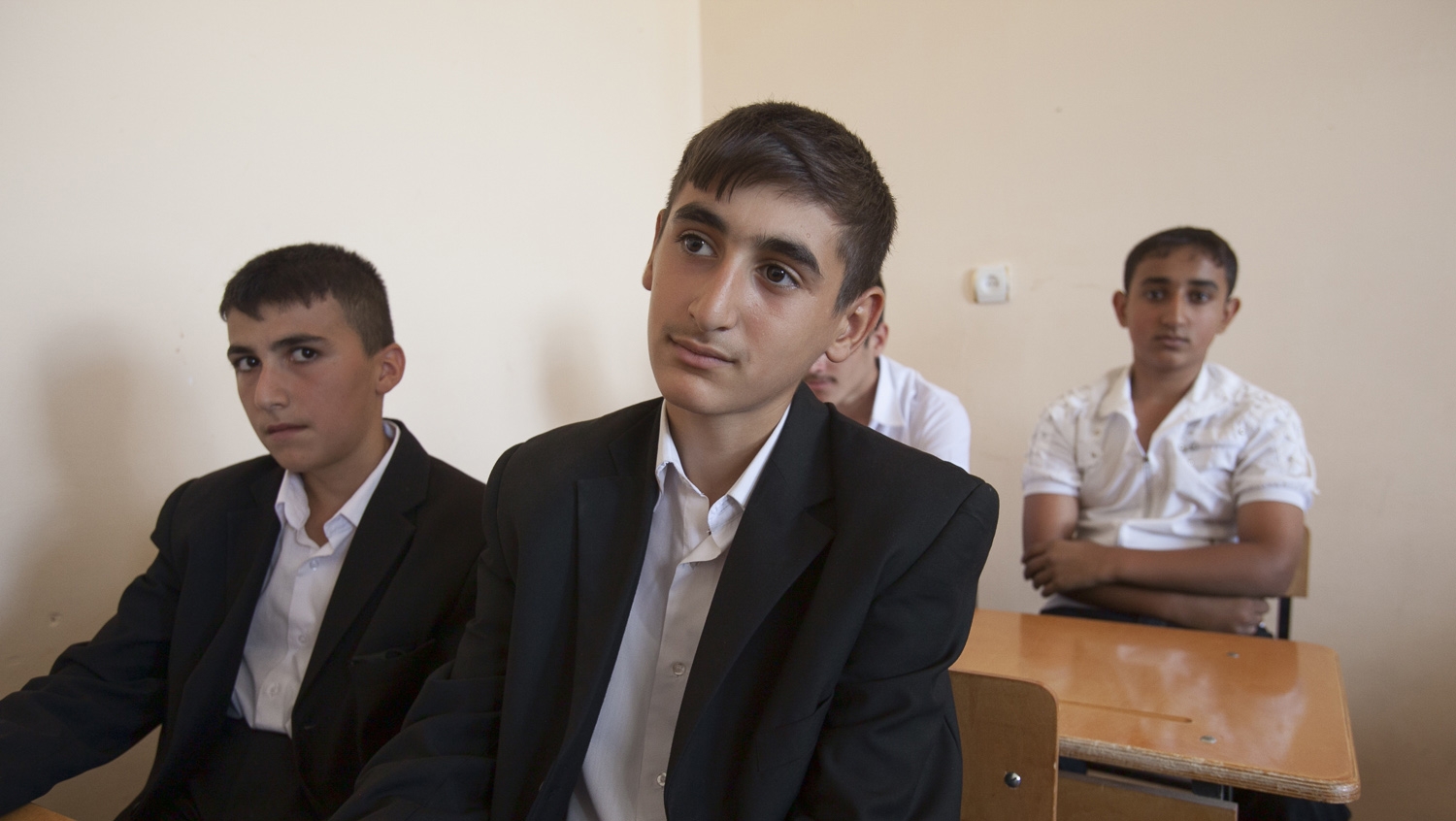 Students in a school near Beylagan, Azerbaijan (David Trilling)

With a cartoon character tattooed to her wrist and a pierced eyebrow, 23-year-old Turana Huseynova stands out in the remote village of Lekit, in Azerbaijan's northern mountains.

A graduate of Baku's Azerbaijan Languages University with a degree in English translation, Huseynova first visited the area on a camping trip with some friends. She fell in love with the nature and the unique culture of the region, and when she graduated found a job there.

Now she's on a three-year contract to teach in Lekit. She said that while people in the village certainly noticed her untraditional appearance, they've been nothing but welcoming. “People here are quite decent, they have never said anything to me, just explained the school dress codes and so on,” she said.

Huseynova may be unusual in Lekit, but she's not alone. In spite of the low salaries and poor work conditions teachers in Azerbaijan face, some young teachers from Baku are moving to remote areas. The novelty has garnered media coverage, and some of the teachers have become minor social media stars.

Habib Alizadeh, a 26-year-old history teacher in the village of Gegiran, in the mountains near Azerbaijan's border with Iran, posts videos on Facebook of his entertaining lectures, often involving music, and his bicycle trips to other villages to share books. The videos have drawn Azerbaijani journalists to visit Gegiran and feature Alizadeh in their stories.

Under the Soviet Union, teaching was a prestigious profession. But in independent Azerbaijan salaries have fallen, along with teachers' morale. Teachers on average make between 150 and 200 manats a month (between $90 and $120). One member of parliament, Agil Abbas, caused a minor scandal when he said that teachers dissatisfied with their salaries could plant onions and sell them. Another lawmaker praised the example of a teacher who works as a construction worker after school.

Teachers do often work second jobs to get by. “Can you imagine how humiliating it is to meet your pupils at the bazaar and be there as trader?” asked Gulnar Abbasova, a 55-year-old literature teacher in Baku who tutors students after school to make extra money. “Now teachers are considered low class in Azerbaijan.”

Schools in rural areas have particular difficulties finding teachers. Before Huseynova, Lekit had only one English teacher.

The government has tried to incentivize teaching in rural areas. Young teachers outside of district centers now get an extra 60 manats a month, and those more than 20 kilometers out of the center get 160 manats extra.

Of the nearly 6,000 teachers that started this school year, more than 3,000 work in remote areas, and a total of 7,500 young teachers get incentives for working in remote areas, Eshgi Bagirov, the head of human resources at the Ministry of Education, said in a recent briefing.

But some are skeptical that the incentives the government offers attract enough talent. “No one would be motivated to leave home for additional 60 manats to work in a remote village,” said Nabatali Gulamoglu, an education analyst. “This amount won’t make their life different. The extra payment is so small that we are still not going to be able to solve personnel problem in remote areas. There is a need for a systematic change.”

Anar Azeri, a 30-year-old Baku native, teaches computer science in Khinalig, a village in Azerbaijan's northern mountains. His school didn't have a computer teacher until he arrived. He said he loves the job in spite of the salary: “What can make you happier than fresh air, being far away from the stressful life of the city?” Life in the village isn't easy; he has to gather water from a spring far from his house. “Here, like in many other regions, you only see women carrying water,” he said. He carries the water himself sometimes, earning “strange glances” from some of his neighbors, though they have grown accustomed to his unusual behavior.

Before Khinalig, Azeri taught for two years in another village in the same region, and he said if he changes schools again he'll choose another remote village.

Huseynova, who has three years left on her contract in Lekit, said she was worried about the salary when she started the job, but now she's not as concerned. “Teaching is a noble job,” she said. “I don't know how sincere it sounds, but it's enough for me to be in the place I want.”